THE INFAMOUS FOUR GO FORTH IN INGLEBOROUGH

Once upon a time in lands far to the South four fearless bloggers looked Northwards and mused on what might lie in those grey lands.
They pondered and mused on how they might head to this land and conquer it's mighty hills (walk up). Plans were formed and an army amassed. I say an army ............
And lo with time it came to pass that the same four headed north on a quest  to Austwick.
By many different routes they did travel North, those from the East travelling together.
Eventually all four intrepid travellers arrived at Austwick and it was time for the great adventure to begin.

Well, Alan was already there, and James had arrived at some time slightly earlier on the Friday.
Martin and I arrived  about 11.30 after a quick circumnavigation of the village and a call into the Post Office for directions to the house.
Undeterred by this lack of navigation, we were still prepared to risk life and limb in our quest.

Our journey North had been full of sunshine and brightness, and only 40 miles further south, the sun had shone with an uncustomary summer like brightness.
But shortly after as we entered the realm of the great greyness, this was displaced by a monochromatic dull drizzle like vision, and we knew we were approaching the realm of the great northern grey lord. We were undeterred at this point and drove on.

At last our journey came to rest and we entered the castle of Rick and Lindsey.
I say castle, but it was actually a house.
A mighty fine house I might add, and the hospitality was wonderful.
With hindsight we should have stayed there, but that is not why we came.

So we had a cup of tea and prepared to head off.

Pete (aka Grumpy), you know, that dreadful man from the message board  ,
and Avril were there. LOL
And after a brief chat, and a change of gear, it was time to head off.
It had stopped raining (briefly).

My old camera eventually died just after the challenge.
The replacement I had bought several years ago is with Lucy, because hers broke so I gave her my camera (sweet).
Thus I now have an Optio WG1 GPS, it being waterproof, and pretty rugged, and hopefully open to a bit of abuse.
This is it's first outing, and I will report back later how I get on, but since I am a bloke, I have NOT read the manual on how to get the best out of it, and this is my excuse for the quality of the photos.
Also, it is why about 6 of the photos I took never came out at all. I have now figured out how long I need to press the bloody button for to actually take the photo. This is not the cameras fault, but because I am a BLOKE and so obviously just know how to NOT use my camera. 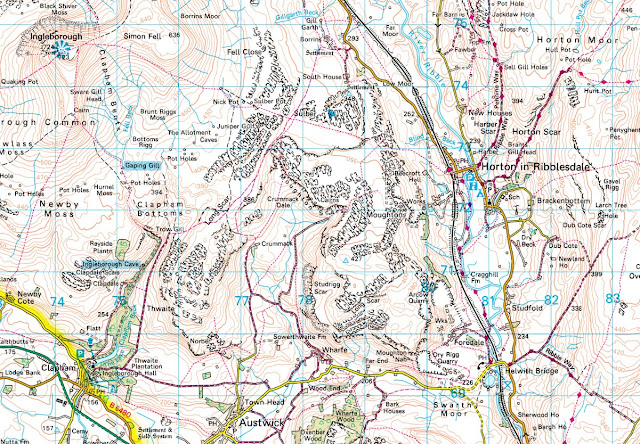 It was looking like rain, but we made the most of the moment.
Now, I would have put a picture of everyone in here, had I pressed the button to take the photo.


We headed up the road out of Austwick amidst, rain and rather stinging SLEET. Undeterred, we had a mission to complete, and even having read the forecast, we were going to go up that Bl00£y hill.

I was not looking at the map, and to be honest I have NO idea of the route that we took.
It is sometimes nice when someone else navigates.
I would have looked at the map had I been able to remember where I put it.
Later I would find it when unpacking at night 1 camp.
I say night one, I mean ONLY night camp, but we will come back to that.

So minus map, or locations, here are a few pictures on route.
I will leave it to others to fill in the where's! 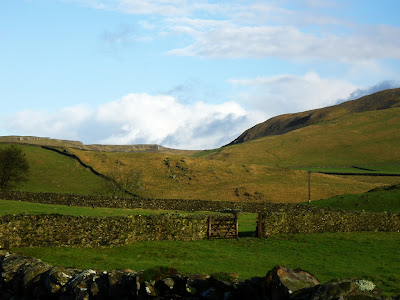 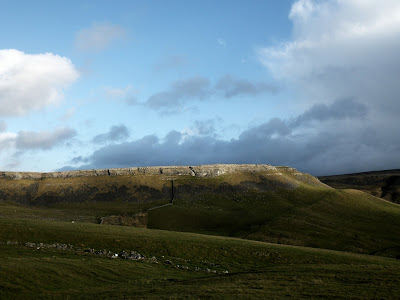 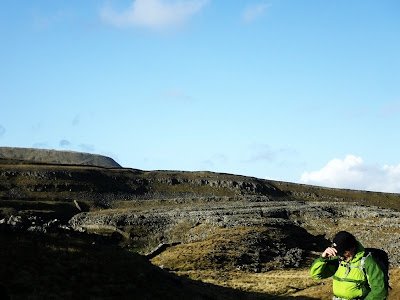 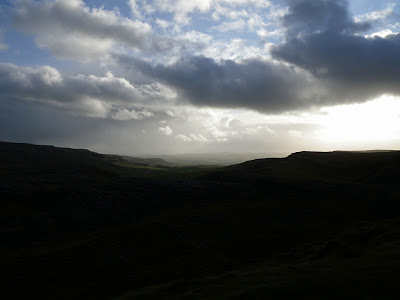 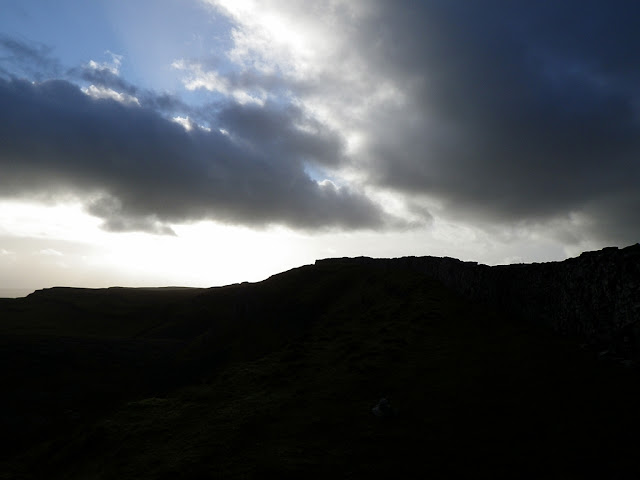 A couple of Moody sky shots

After pitching camp, we had a wee dram or two, and then the weather turned rapidly for the worst. It started to rain and sleet. Within no more than 10 minutes, there was a layer of hail on the ground and spindrift building up on the tents.

It was getting time to get into the tents.

This brings me to the major problem with Wild Camping in Winter.
Not the weather as you might think.
No, the ridiculous number of hours you have to spend in your tent.
Now OK, often, you can walk for quite a time in the dark and then pitch the tent.
But on this night, with the weather closing rapidly in, it meant the best part of 15 hours of darkness, and that pretty much meant 15 hours in the tent.
Maybe it is time to invest in a Kindle.
As it happened I had some food, a few more drams of Abelour 10 year Malt (that's the one Al £20 at Tesco at the moment), and then turned on the Music.
Luckily I had packed a backup MP3 player, because the main one had decided to die,
and my phone, a Galaxy S2 as brilliant as it is has absolutely SHIT (sorry but it is the best way to describe it) battery life. I reckon 24 hours MAX unless you turn it off.

It was to be a night of broken sleep and buffeting winds.
Wendy rocked and rolled, and that was with the extra support internal stays.
Luckily despite the buffeting she held steady, and all in I had a lot of good sleep.

Looking at the weather and based mainly on the wind, I decided that it was time to rapidly vacate the tent, and take everything down, before the wind decided to destroy it all together.
It also seemed a good idea to get it all packed away before it started to rain.
So after a rapid decamp I then sat inside martin's Trailstar.

Now I was not a big fan of Tarps, but I have to admit, that this was pretty much bullet proof, and the footprint inside was huge. I would have to give one a proper test before I took the plunge on buying one, although I know that many rave about it.
Not sure I would want to take one to the Monadhliath tick fest without some sort of high sided bug net (which you can get), but I was pretty impressed with it.
So if anyone out there has one they are not using for 3 months, I am the man.
Alan's shorter 2C also stood the test as did the Scarp.
I am pretty impressed with the Scarp as well, although I have got used to the cavernous nature of Wendy and think I would find it slightly small now. But James's Scarp was rock solid.
Ok, everyone else's tent was fine OK.
James packed up as well, so we were just waiting for Al, who was still inside in his sleeping bag.
Now remembering back to the Challenge and the amount of stick I got, I could have been a vindictive man and made a comment.
But I am not like that at all.

About 8~8.30 it was time to head off.
It had not started to rain yet, although it would and we made our way down the hill to head over to Horton in Ribble.
Looking across to where Pen-y-gent ought to be and bearing in mind the wind velocity, it was decided that discretion was the better part of valour, and that

'It would not go'

The path down is quite straightforward, but the amount of wear and tear and erosion caused by thousands of feet is very very noticeable.

There are however on route some fantastic examples of the Limestone Pavement.
Fantastic to look at but in the wet a nightmare to walk over. 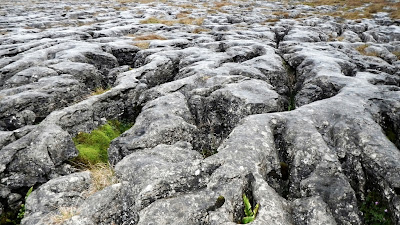 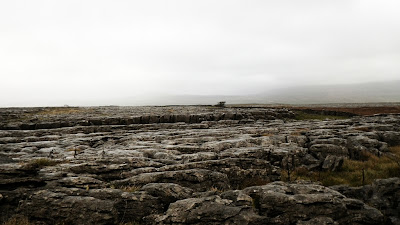 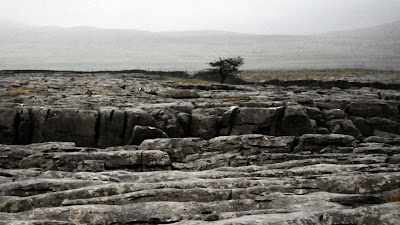 We headed down into Horton via the railway station in light drizzle, although not too bad at this point. It was decided that we should make for the coffee shop that is the sign out for the three peaks.
To our horror, it was shut and not opening until 26th Dec.
In all honesty that was too long to wait and so we headed for the pub.

Sadly this was not open either, and it being a bit past 11, and the pub not open until 11.30 we decided to wait

Eventually the pub opened and we went in to grab some lunch, liquid and otherwise.
At this point, as we sat in front of the warm fire, the heavens opened, the wind picked up and the outside world looked like a false rain scene from a movie. The rain travelling somehow horizontally. many a dripping and wet walker arrived or should I say dribbled into the pub.

"We'll just wait a bit longer until it eases off eh.."

Wishful thinking.
It had absolutely NO intention of easing off, maybe ever.
So, with one tent down, and James feeling the worse for wear, it was decided that we would head back to Austwick and Rick and Lindsey's.

It was a brave effort, but the forces of the great northern grey Lord had beaten our quest.
We would raise a new army and come back in the spring to fight again.

Provided we got back to Austwick.

It was getting near 1.30 and time to go.
The weather was not going to get better.
It was going to get a lot worse though!
There will be no more photos from this point.

We headed back via the railway line, back the way we had come to pick up the track back to Austwick.
We set off via Moughton Scars, and then took the left hand track near Crummock.
This looked on paper like the bigger track. In reality, it was a muddy narrow foot and MTB mangled muddy track/stream/puddle.
Eventually back onto the main track though it was a wet walk back. By now we were on the wet side of moist. For wet, read very wet!
Gloves, heads, (and for some rather more body parts)  were soaked through.
I will not mention names, nor parts for the sake of decency.

By about 3.30 we were back at the fantastic hospitality of Rick and Lindsey's, and with some warm dry clothes, a cup of tea, and a bit of home made sponge plus good company, it was time to head home.
Well, Al was staying over, but James had to get back, as did Martin and myself.
Indeed I had to get a train from Kings Lynn back to Cambridge at 8.30.

So a long drive and many conversations later plus a short train journey I was home.

It had been interesting, the weather entertaining, the wind exhilarating and for Wendy destructive,
but most of all, the company had been excellent.
It is always important where you go and what you see, but just as important is who you go with.
Despite Wendy's problems ,and having to finish a bit early, it had been a great couple of days.
We must do it again properly next year.


Oh by the way, this new blog editor is still Crap