I woke at some point, and started to get ready to break camp.
I think we finally left at about 9.30 (ish)
The nice thing about shorter days, is that there is NO RUSH.

Please note, the tracks on the maps were the original intended routes.
We may well have deviated from these. 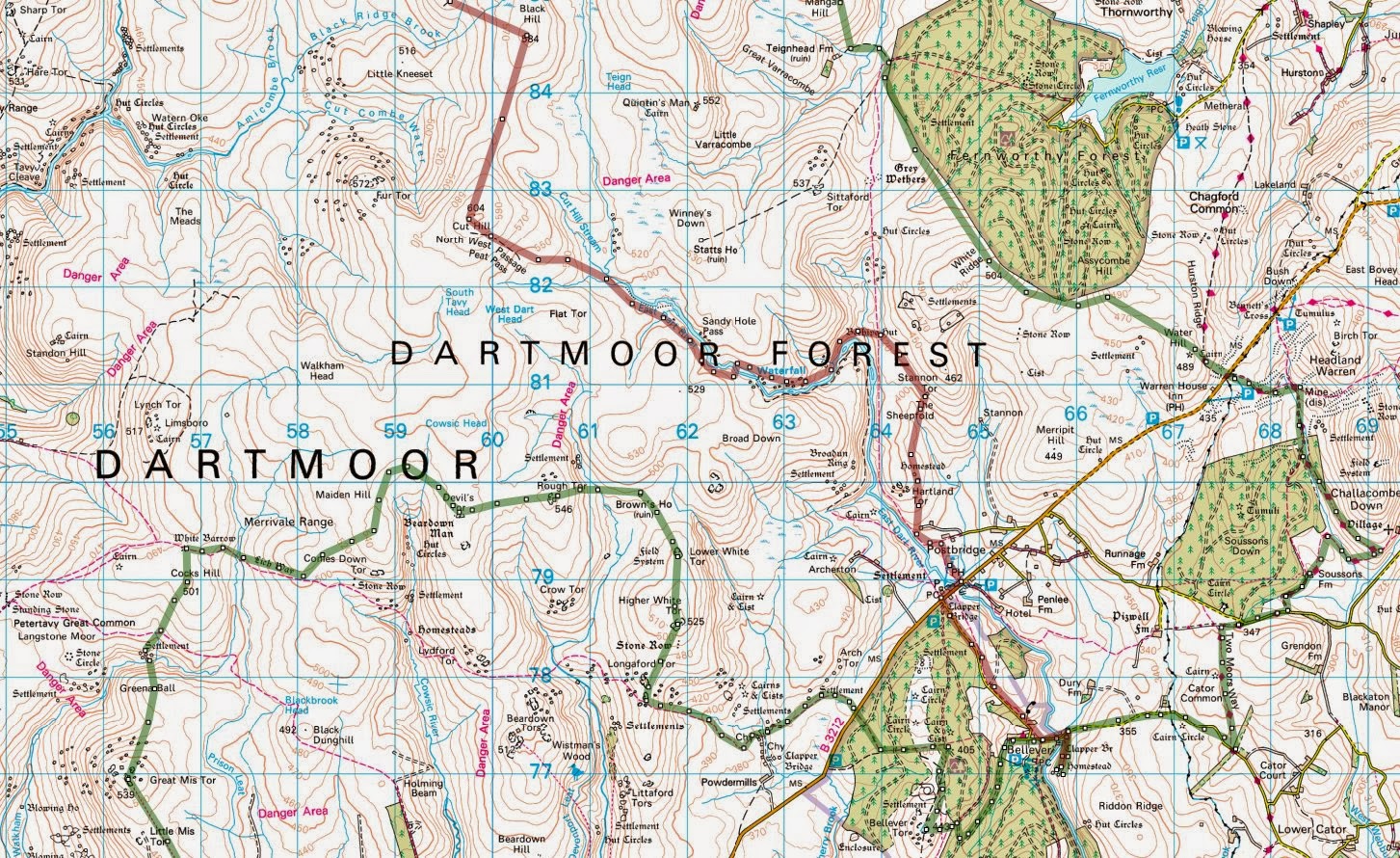 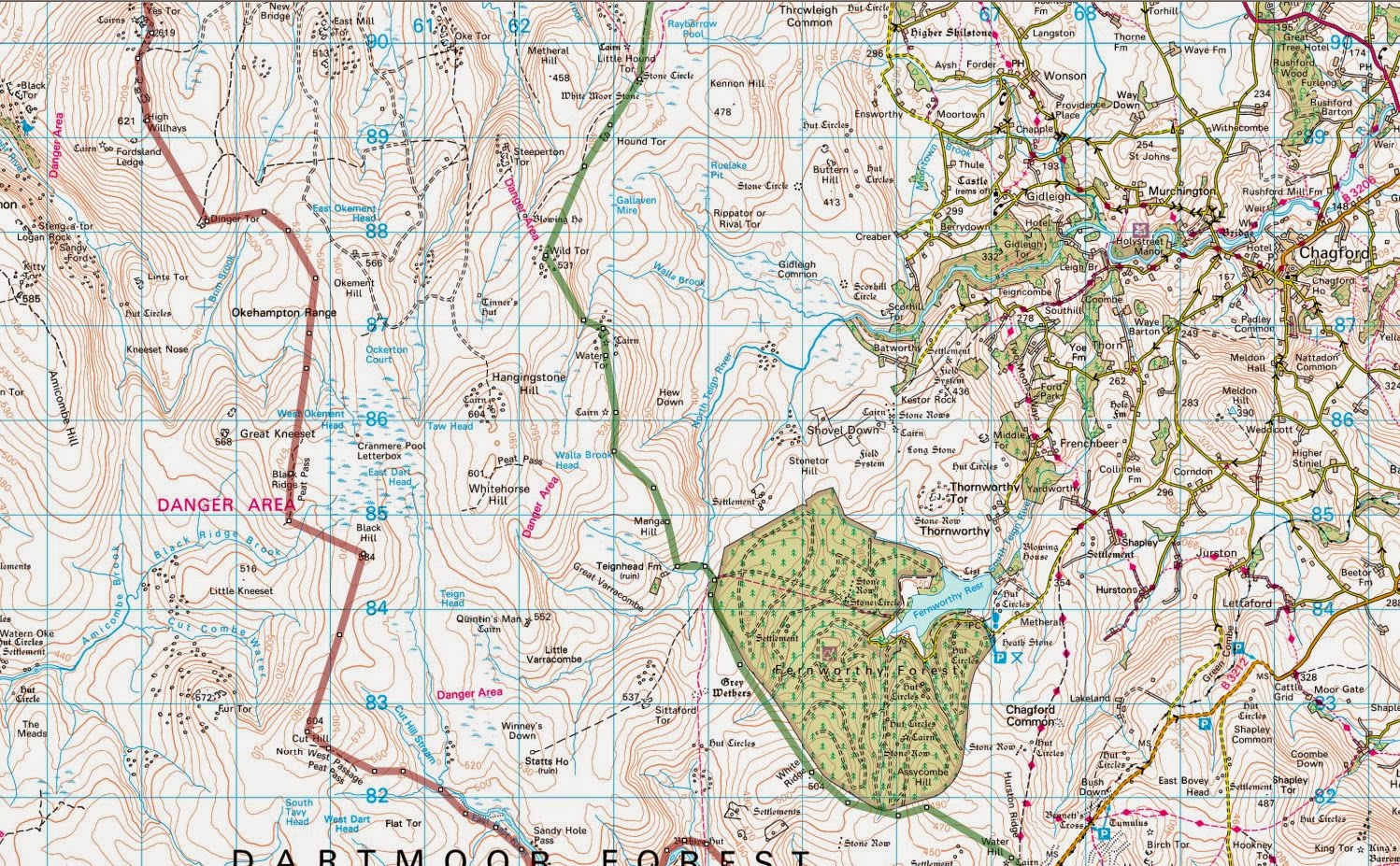 So we headed off tracking the river out before heading up Conies Down Tor.
The track was varied.  Not wet, but pretty tussocky until we got up high to the Tor. 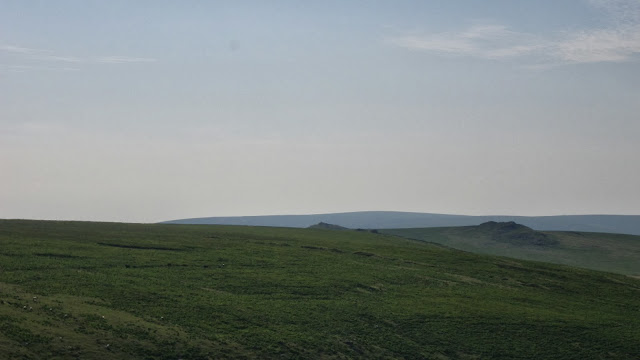 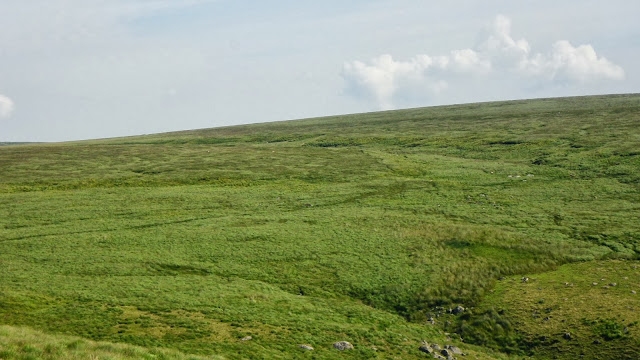 We then set off to Devils Tor. Not a lot of devils, but cows.
Unless you consider cows to be devils.
They do provide an enormous amount of shit though.
In fact one of the memories I will carry with me, is the vast amount of animal shit that was everywhere.


It is a pity that the MOD use really UGLY Grey rusty boxes on most of their military observation posts.
About time they gave them a lick of paint. (NOT GREY)

We trundled over to Rough Tor for a look, and then dropped down and back up the track over towards Brown House on an easy to follow track, skirting the ruins of the house and traversing round the hill side to drop down to the river for lunch.

Plenty of running water here. I sat on a rock looking up to Lower White Tor, in warm sun.
I could probably have drunk the water fresh, but with so much livestock about on the hills, I filtered all drinking water with my Delios Filter 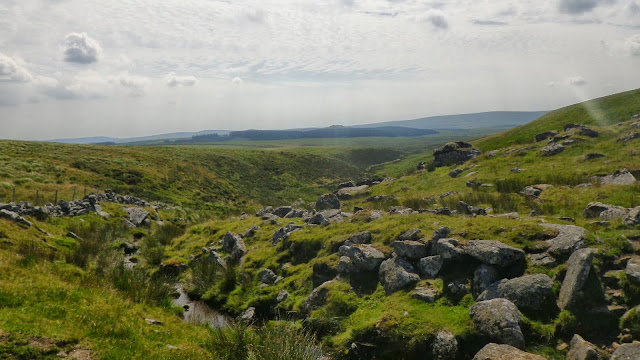 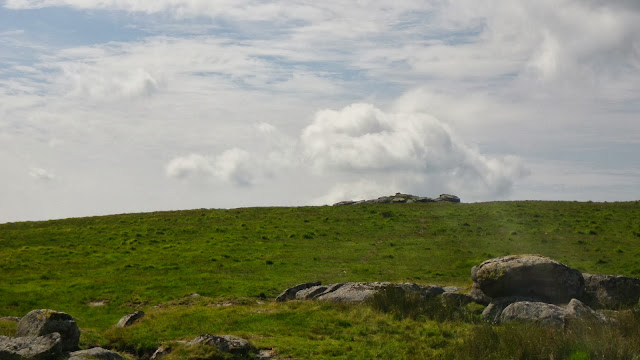 After lunch we made our way Up Little White Tor and then over to Higher White Tor and then up onto Longford Tor.
This is a mighty fine slab, and from the initial approach looked like a bit of a scramble.
But from the far side there is an easy route up.
We met some people on the top who then departed (might have been the smell), choosing a somewhat precipitous route down.

Some great views from up here. The wind was quite blustery by now.

A pause to taken in the vistas, and then time to descent down.

Below are some vies which are in the main I believe from the top of the Tor.
Hey, it's been months and I never labelled them early on. 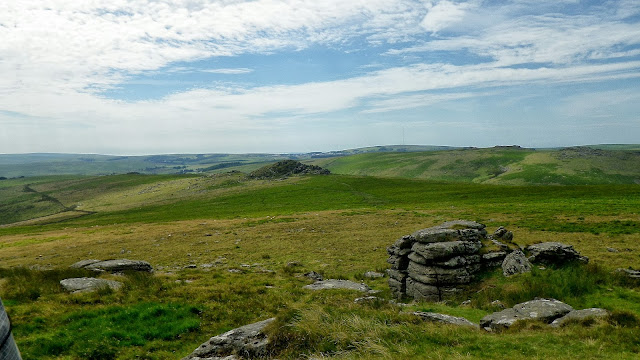 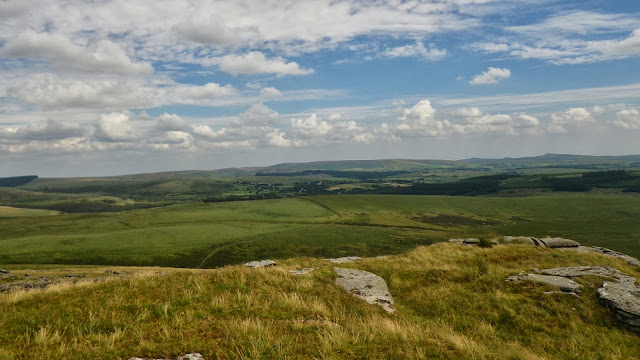 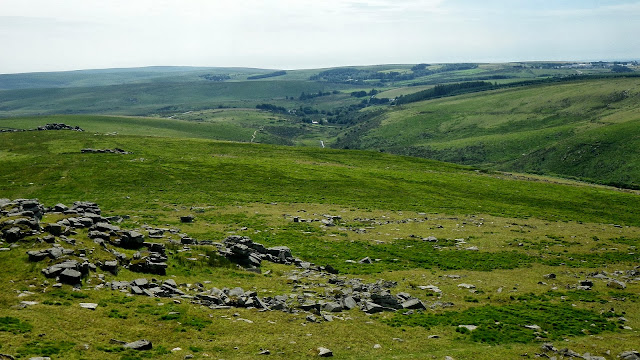 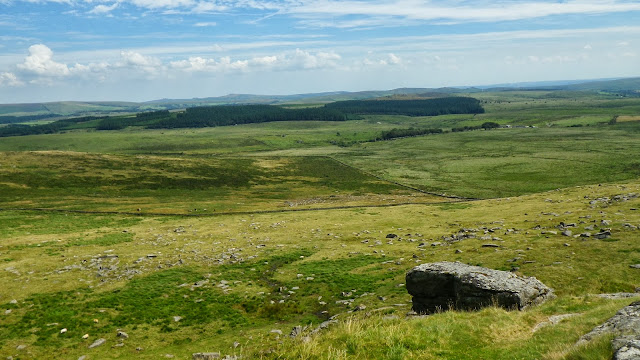 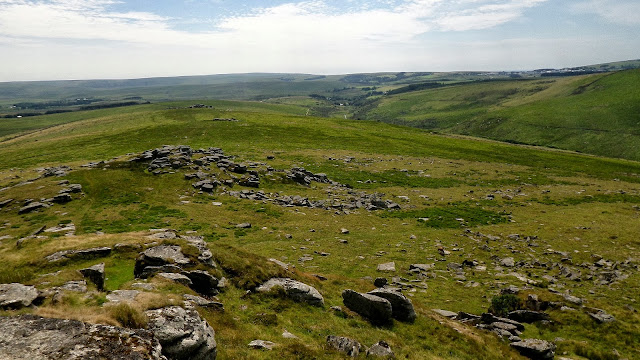 We made our way off the blustery Tor.
On the map there is a route down, and a track, BUT, it is somewhat indistinct on the ground, so we ended up just heading down, using the Chimney as our reference point.

The direct route drops down to a small gap in the wall and then follows a direct path down to a corner.
It is nice easy walking, as long as you avoid the long grass getting up your shorts leg.

NOW, if you read Robin's account of this, he will say I blame him for the next episode, but that it was my fault.

At the corner I suggested, that the track possibly went left and then skirted round the rough boggy ground joining our intended destination from the left.

IF you ever go this way, take that alternative track OK.
Trust ME.

But Robin reckoned that the path went straight down and across.
And this is the path we took. I say, path.
There was NO path.

At first it was ok. Then there was nothing. Indistinct LOOONNGG Tufty waist high grass.
The further you went, the worse it got.
Ending up with walking on big wobbly tufts amidst BOG.

NO. Make that BOG

We took slightly different directions on this bit. Robin went off to the right to try and get round, I went straight through and then straight down.
Plunging into nasty turgid stinky peat bog water up to my thigh.
Not ideal with boots, worse with shoes.
No pointing pissing about now then, I was DAMP.

But this horror would last for at least another 10 minutes as we tried to cover the 100m to the gate in the wall.

Which we did. I sat on a rock and emptied my shoes and rung out my smelly socks. One bonus of shoes is that they will dry out as you walk in them, as long as you don't follow Robin ;-)

As we walked over to the ruins and the chimney, I cast a glance across to my left, where there appeared to be a nice dry LRT. 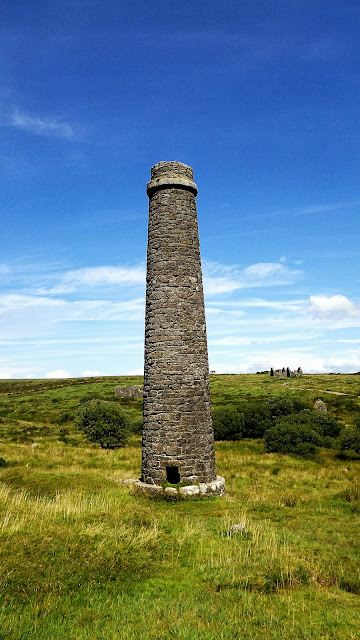 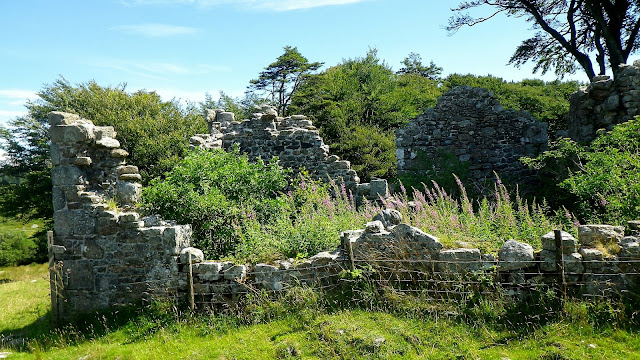 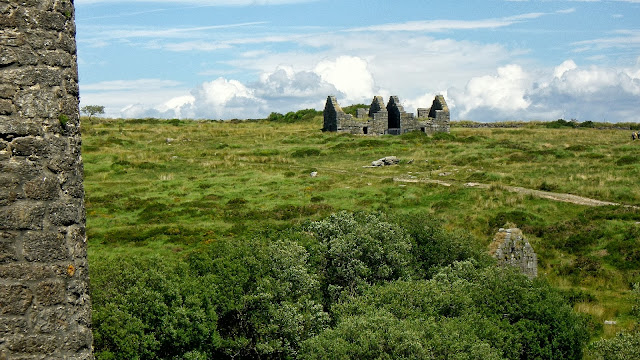 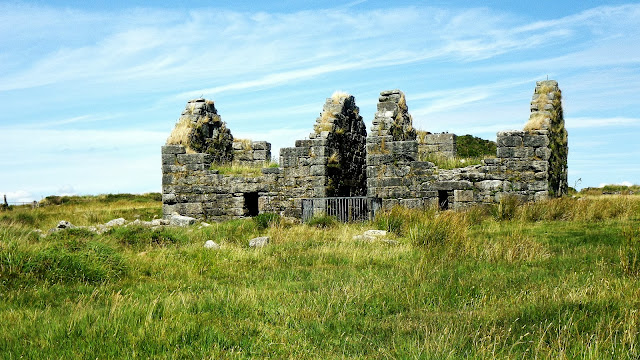 With damp feet, I ascended the track up past the ruins. Still a hike to go before we reached the road. 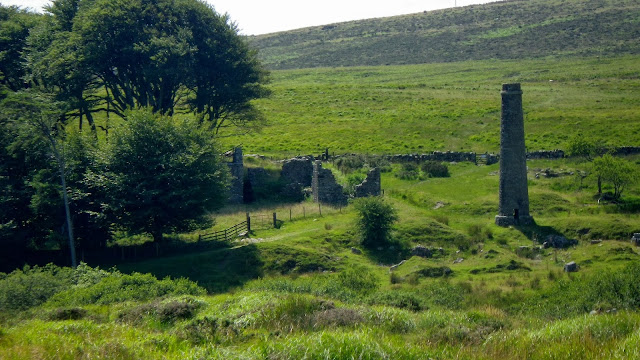 The track up is clear, but as you get to the top, there is nothing definite on the ground. Just work out a route and then head down. But watch out for more very wet bog by the road. You need top bear left and avoid that. Oh Yes Eventually we made it to the road. Turned left for a short blat and then right up through the forest to head towards Bellever Tor.

We had been up enough Tor's for 1 day (or had we?) So we decided to give this one a miss. Instead we carried on to the end of the track before turning right and then following the trail round and then down to the left.

When we got to the car park and river, it became apparent that this would NOT be our camp for the night.
It was full of people.
Lot's of people on both sides of the river.
Families of bloody people.

We carried on along the track out to the road, and then down to the Clapper Bridge and the rather Fine Post Office Stores at Postbridge.

Oh by the way we are on the BROWN route now. 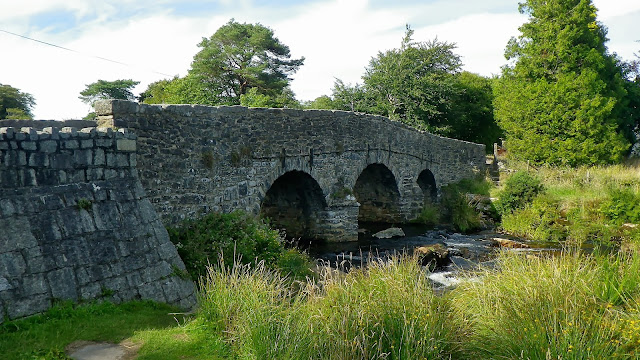 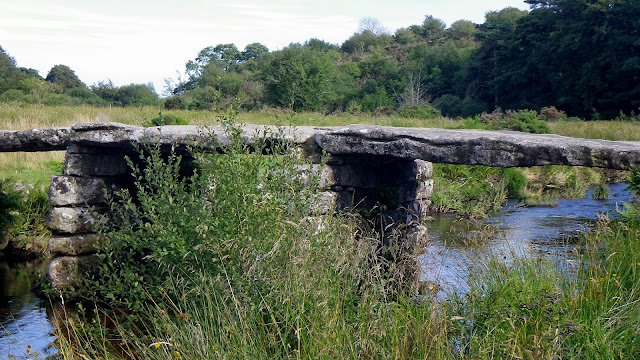 There were loads of people here as well.
Mostly French for some reason.

BUT. They sold drinks and cake and tea and ice creams

We stopped had a sit down on the bench outside and partook of  damned well earned rest.
It was still very hot.
I removed my shoes and socks to try and get them fully dried out. 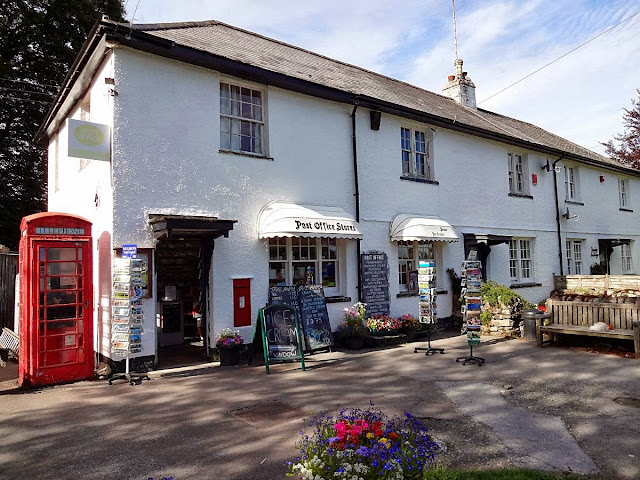 The forecast was for rain in the night. Probably arriving about 10.
We had loads of time.

BUT all good things.

We headed off to get over to the beehive where we would be camping for the night.

So leaving the Post Office stores behind we headed up the short track to follow the river, but not on the lower track, taking a slightly higher track.

This turned out to be excellent and easy walking.

We didn't do the marked track along the river. Instead heading up to Hartland Tor, which is much much easier walking 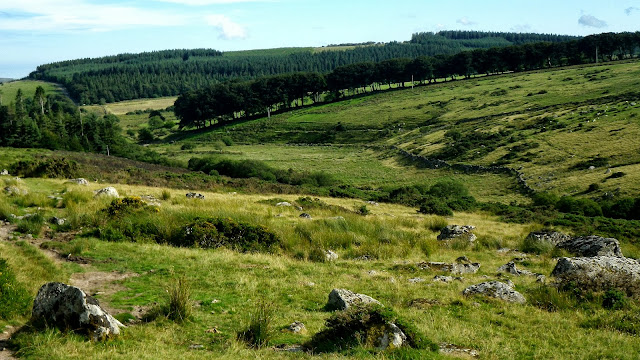 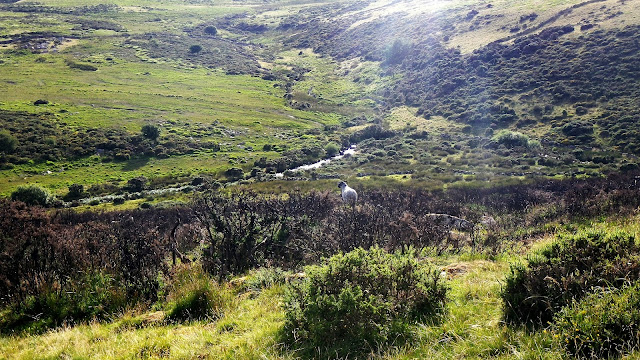 Eventually Robin spotted the route down to where we would camp.
It was a short drop down to an area which was nice and flat.
Also near the river for water.
I found a suitable flat area, and kicked a ridiculous amount of dry sheep shit away.

Then put Wendy up and got my stuff away.
Luckily, there was still NO sign of the pending rain. 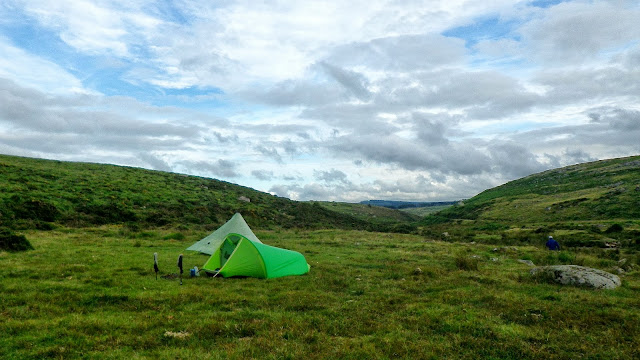 As the sun began to drop, the clouds began to form from the right (looking at this photo).

By about 8, there was hint of rain.
Nothing big, but enough to make you want to be in your tent.
Which is what I did. Made up another Adventure Food meal.

Had a slug or 2 of something that was remarkably like a single Malt.

I played some music through the little speaker that I carry for parties.
This was a sad one person party.
I think Robin was already in ZZZZzzz land.

And with music playing, I must have drifted off to sleep, because when I woke in the night. It was still playing, and the Wind was a blowing And the RAIN was absolutely hammering down.

Lucky I had had a pee earlier.
I was NOT going out in that.
Fingers crossed for this to pass through in the night.

I went to sleep again.