It was a bit colder than I had expected in the night, and because I was facing towards the wind direction in order to see the sunrise, I found that a breeze was blowing into the tent through the door, which on a Trailstar is a porch.
So I put up the rather nifty Cuben Fibre door from Sean at Oookworks, and all was good, except of course that I could not see the sunrise.
Since I was actually giving it big time ZZZZzzz when this happened, (possibly with nasal accompaniement, I do not know), then it mattered not.

So, by the time I stuck my head out of the tent at something like 8.15, Al was almost packed, and so was Pete.

"So, we never agreed a leaving time did we?" says I.

So Al and Pete headed off into the distance, and I faffed around in my tent packing and stuff, and generally being.

And I believe that I left something like 8.50 (ish) 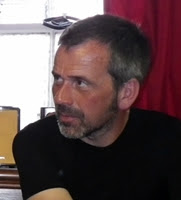 And together we walked up the hill via a route that may or may not have been the perfect line, but was pretty damned close I can tell you now.

Over the other side, we started down the track that leads to Glen Lee.
But, this is a rather bouldery steep LRT, and so since much of the heather had been burnt off, and also since the new heather was not too high, I decided to make a rather more direct line straight down to where the track finished.
And this is what I did, bashing my way through the heather in a rather softer and much nicer straight line.
It was most enjoyable, but with hindsight, may have been not so sensible in light of the fact that just after we arrived back on the track, we encountered another one of these.


Now, since this was the second one in two days, and another shortly, I am assuming there may well have been more.
Maybe bigger.
Maybe in the heather
The heather I had just bashed through.

As it happens, I went back through the heather after this.

I mean, I am not going to be intimidated by a little snake.

Now, if we had Brown Snakes and Black Mamba's over here, that would be another thing altogether.

So, we carried on down the track, and at the bottom where the river crosses, finally caught up with Al and Pete, who were just setting off.
It was a HOT day, and getting hotter, and I stopped for water briefly, before following on after.

It was now on the flat, which of course meant that Al would pick up speed, which he did.

We carried on straight past the Sables of Lee, although I did stop here and a bit of a shoe faff, finally caught up a bit further on before the track bends to the right.
Well, not quite everyone, but quite a few, who were having a rather nice sit down close to the old bothy type building that is set back from the track.

Whilst we were here, it was time for a nice sit down, and get the shoes off the feet.
I also needed to add a bit of tape over the plaster on my little toe, and also micropore up a couple of fingers. One of which I had managed to cut again the previous night.

I know, I know, I should really not be allowed sharp things, as you can see from the picture of the knife below, which still had the dried blood from last nights finger incident. 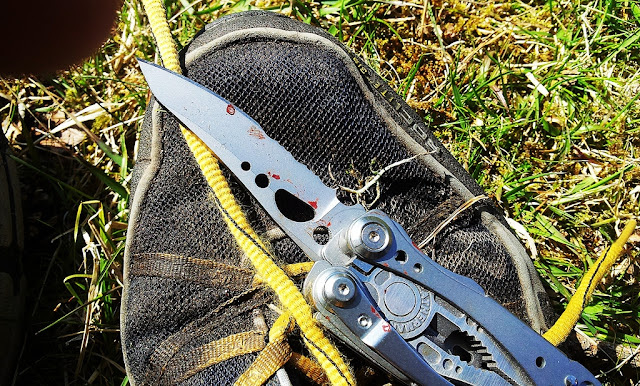 By the way, all is well, and since I got home they have healed up nicely.
Mind you I have not used that knife since.


Whilst here, we were privileged to see a couple of Eagles.
Carl will tell me shortly which Eagles they were.
Maybe in Latin.


Ok, so NOT that impressive, but I tried OK.

We carried on a bit further, Al striding out in front.

And came upon this bad boy as well 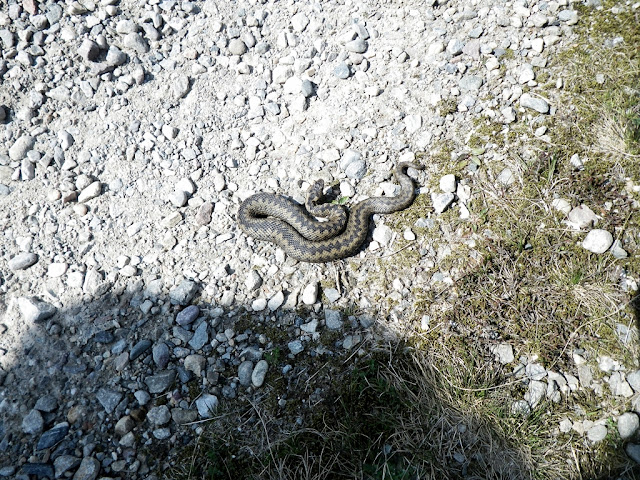 As we approached Inchgrundel I spotted a figure that looked remarkably like Lynsey heading across. She had been to the Waters of Unich where the 2010 Cheese and wine party was held, in rather colder conditions.
We caught up with Al just after the bridge, and everyone stopped again for another sit down and a chat and stuff.
It was hot, and there was not really far to go, and it seemed like a sensible thing to do.

Then we were all off again, briefly, to the other end of the loch, where there is a nice little church with a rather fine wall to lean against.

We stopped here for a lunch stop, and I aired my socks on my walking poles.
Not the most popular act.
Just before we arrived here, the other Lynsey, had managed to somehow blag a glass of white wine, from a couple who had probably just wandered down to have a gentle stroll and a peaceful afternoon by the loch, not realising that a rather motley, dishevelled and possibly smelly crew where going to turn up.
I am not sure if Lynsey got the wine because they were very polite, or just plain terrified.
It did not seem polite for us all to ask, although I had just said to them as I passed, not realising that Lynsey had blagged the wine.

"I reckon you are going to need another bottle and a few more glasses".

They smiled back, but interestingly, left in a bit of a hurry shortly after.

Hey, at least I didn't go over and lick them!

So, another stop over we headed off up the road, towards the turn off point at Westbank.


Peter stopped near the car park, briefly for a chat, and I headed off to catch up Peter and Lynsey Pooler.

No one was going to catch Al.
Firstly, he could smell bacon and beer.
He can do this at over 5 miles.
Secondly, he had spotted several people in front, and his brain had gone into race mode.
The switch had flipped.
His suspension was lowered, and the gearbox ratios shortened, and he was off, knocking off the opposition one by one.
Feet hardly leaving a mark on the ground, he was going so fast.

We just carried on, at a reasonably goodly pace.

In no time at all, we were at St Drostans, and eating bacon butties, and beer and tea. 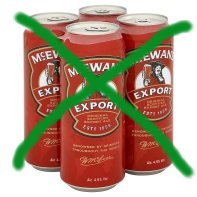 Now, had we known that a greedy bunch would arrive and drink several beers before dinner, in fact so many that we would not get beer with our meal, and that some of these people would take not one, but two, or even three, or more, then we may well have stayed and over indulged.
But we didn't, we booked in for the early meal, and went to put our tents up.
Fortified, and a bit less thirsty.

But, in all honesty, we needed to get to the Camp site, and put up tents, and get organised before the meal.

But first, and as important, if not at this moment in time a heck of a lot more important, was going to the toilet (properly), and also having a jolly good shower, and washing some clothes.
This was all done at the same time.
I say at the same time, but that would be wrong, especially in the shower.
I mean of course sequentially.
The clothes would dry out at the tent, and in this weather, be good to go before the meal.
Yes, it was that hot.

So, I blagged a shower, and spent a bit of time prior to that washing some stuff (in particular, shreddies and socks), and having a long sitting contemplation.
And thus, lighter, fortified, cleansed, and having pondered on the meaning of life, it was time to head off briefly, and put up tents and sort out my $hit..

There were a lot of people there, and I would have got the tent up quicker without all the interruptions, but it was a lovely day, and there was no rush, and it was a party.
More like a pop festival than a Challenge (minus the music).

Of course some people had less success getting their tents up than others.
Here is a fine example of how not to pitch an Akto, and I had seem some pretty dire attempts the night before at the Shielin of Mark


I wandered round generally socialising, and Al I think may have had a short nap.
There were so many people that it is pointless naming names.
You were all there, and you know who you are.

I did for some foolish reason however take a picture of Jim's Toe repairs.

We did go back for dinner, and sadly had to drink just wine, because all the beer had gone.
And I had agreed to pay for the 2 can, yes, 2 cans that Jim had taken.
He did pay it back.
But had I known they were the last two mind!!!!


It can be bloody tough on the Challenge.


On a plus note, it meant we could get to the Mason's early, and get revenge.

Which we did, and a jolly fine and rather long evening was had, with many a fine person.

I love you all.

It was a pretty good night, but I only took a couple of pictures. 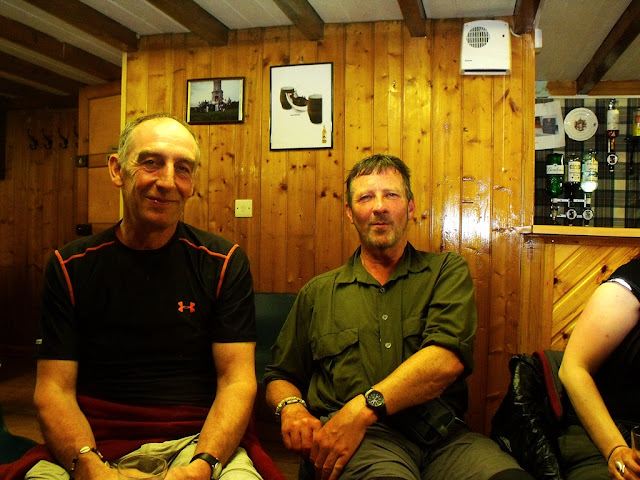 I spoke with many, Ale and whiskey were drunk in reasonable measure, and at some point
during the course of the evening, I managed to get back to my tent, snuggle into my sleeping bag, and get to sleep.
Indeed I did not get up for a pee either.
Too bloody far to walk.

It had been another great day, with great country and great people


The Great Gig In The Sky - Pink Floyd
From the Tarfside of the Moon
See what I did there?