In which we do another long day, and find more friends along the way.

A few more pictures today. The weather after a fashion was a bit better. 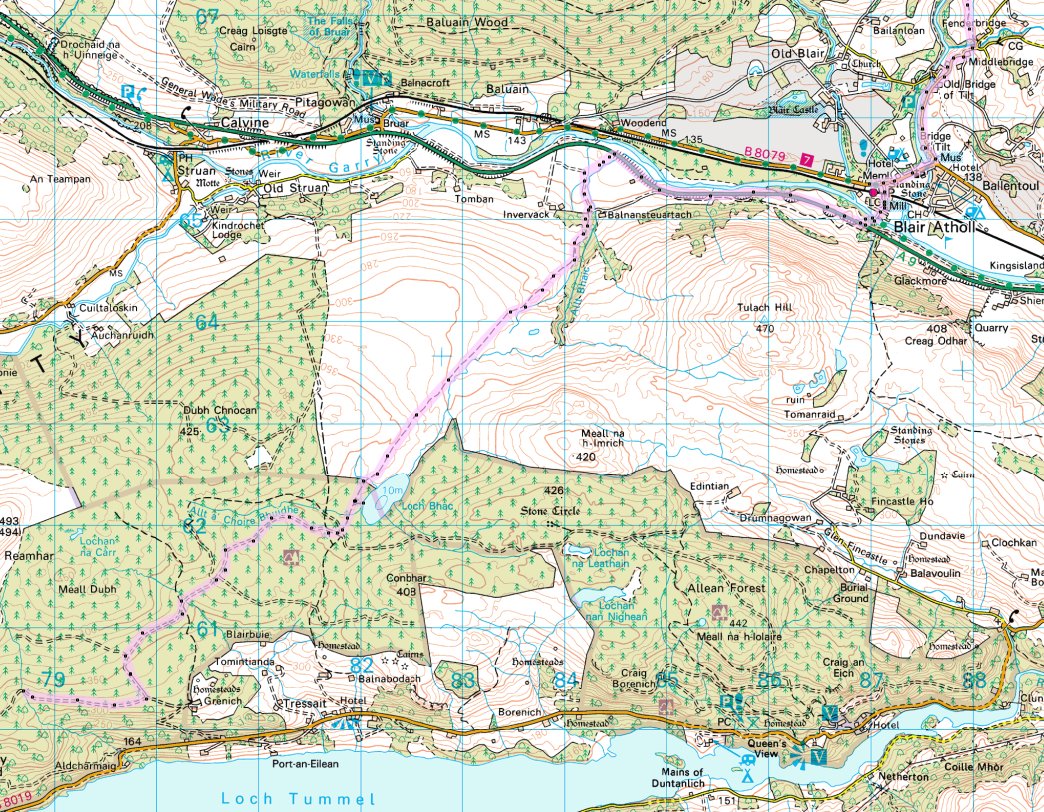 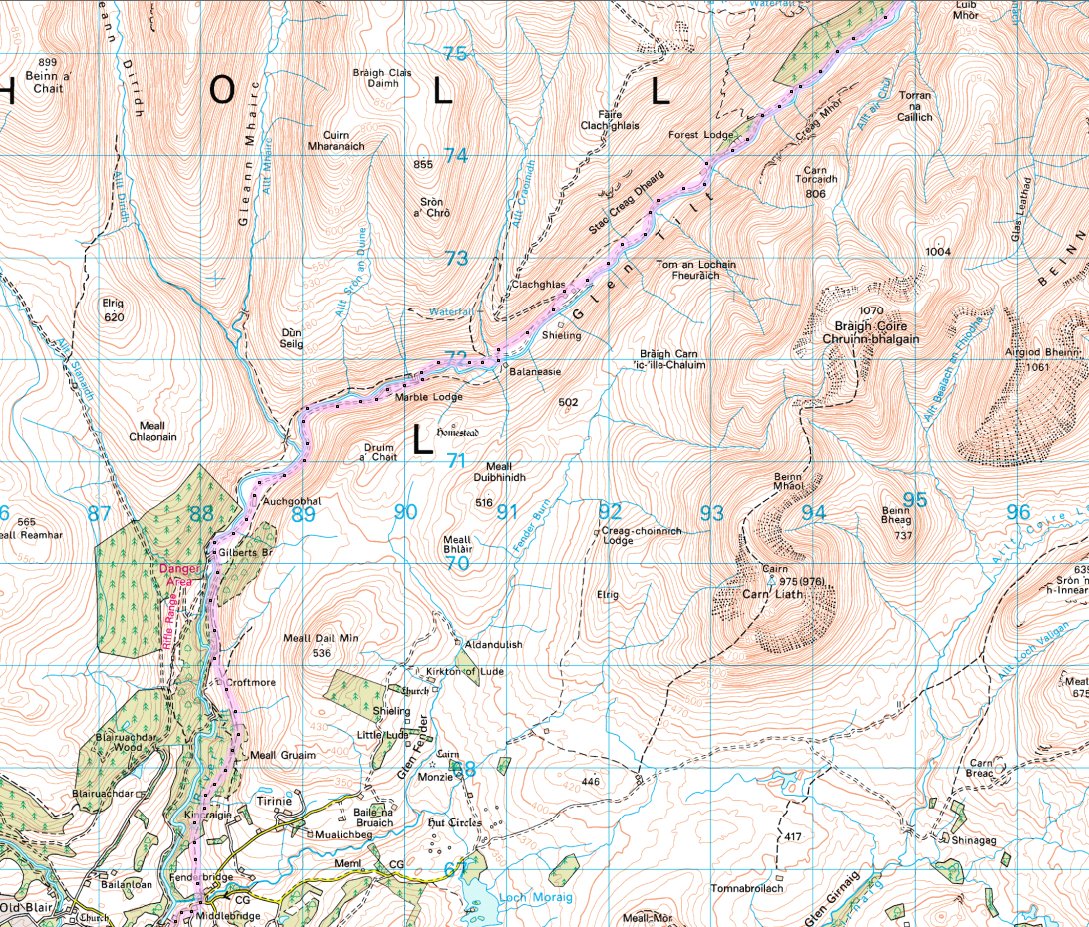 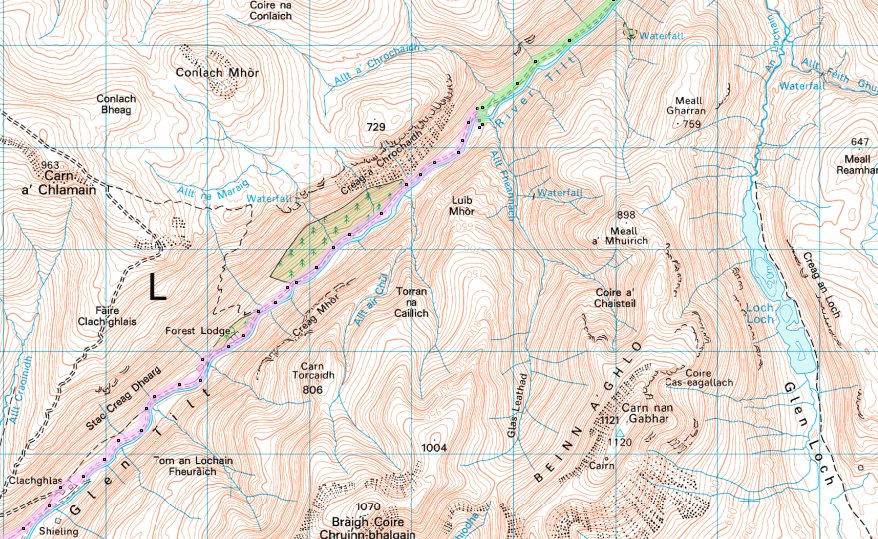 I woke a bit late (not an unusual occurrence that).
There was frantic packing and cooking and stuff noises coming from Al's tent direction.
Al had probably been awake since 6.30, had had a complete breakfast, and was within minutes of being ready to go.
I had grabbed an extra 10 minutes beauty sleep (it wasn't working), and eaten a handful of uncooked muesli or something similar.
It may have just been a bit of cardboard.
I managed to get a lot of stuff packed underneath Treeza.
She has a big footprint, and you can pack your bag, and take the inner down and fold it, and wipe it down without going outside.
This is a great relief.
Sadly I also needed a pee, so I had to go outside.

Soon it was also time to drop the tent, before Al got out the stop watch (again).
It was wet, and it was raining.
By the time I had got my tent packed away, all the many bits of plaster I had on my fingers were wet and falling off.

I had not had a good episode with fingers this Challenge.
It had started with the dreaded cold wet and cracked finger tips.
These had been further damaged by the dreaded rucksack stuffer's fingers.
You know the ones, when the little bit of skin, or sore bit gets further mangled whilst trying to stuff something (usually damp) into the rucksack, and catching it on a sharp or pointy bit.
Well, my fingers were not in a good state, and I had further compounded the crime last night in the tent, by trying to slice my thumb open with the incredibly sharp blade of me leatherman thingy. It was just a slip as I was cutting something.
But, it was one of those moments that you look down and think.
Ooops, ahh, that looks quite deep.
And it was.
Not enough to warrant steri strips, although I had some of these after the Peebles Moffat incident.
It did however need a good size plaster on it, and this filled quite rapidly with blood.
My blood.

All in all, my fingers were not happy.
Had they been my feet, I would have been air lifted out.
As it was I just stumbled with bandaged stumps whenever I needed to tie anything.
This morning, the thumb bandage was wet and as such was now bleeding again.

I thought about gloves, but they would have just ended up full of discarded plasters and blood, so I went off with cold hands.
Rucksack packed, and tent poured into it's bag like a stodgy soup mixture.

We headed on up the track.
Alan and Roger ahead, and me having a bit of an everything faff.

Not a lot to report here, it was track, it was cold and it was drizzling on and off, and we had a bloody long way to go today.
We made our way along the track until we got to Loch Bhac.
It had stopped raining, but was still cold and so we made our way into the fisherman's hut for a rest stop, and I rebuilt the plasters on my hands, and also stuck some extra, extra micropore onto my feet, because the old preventative layer had disintegrated in the dampness of my shoes.

All refreshed and now held together again by sticky tape it was time to head off towards Blair Atholl, over the wet and boggy track.
As we went off, Roger and I tended to pull away.
Al was going a bit slower, and also had intermittent blister issues.
As we went, a small group of sheep scurried along in front of us, looking over their shoulders.
Too stupid, just to move out of the way.

And that is why we eat them, and not the other way round.

It was a bit of a slippery journey over the track, that in places was completely under water.
Once we got to the other side, Al decided that rather than go through the farm, we would drop down to the A9 and then do a bit more along here. The logic being that the next bit of track was a quagmire.
We will never know if this was the case, because we walked along the A9 for a few km instead.
Well, if you are going to die on the Challenge, this is as likely a spot as any.
It wasn't the traffic coming towards you, it was the idiots overtaking from behind that on several occasions nearly wiped us out.
However, we eventually found the small footpath down into Blair Atholl, that crosses over the bridge.

At this point, Al has gone.
He had sensed beer, and that is like a nitro-methane injection to his little 49cc engine

So we made our way to the hotel, and after a while, managed to find someone to make us a cup of coffee.
Al ordered and I collected together 4 Mountain house meals that were now surplus to requirements, and walked down to the post office to mail them home.
I got myself a nice big envelope, and borrowed a pen and posted them home.
Al though this was daft, but it cost me 10 minutes and £3 and I saved carrying, or chucking away £28 of meals.
Whilst I was in the Post Office, I bumped into Nik.
She had stayed in Blair last night, and was also posting home food.
I told her that we were all in the hotel, and she came and joined us for lunch.


It was grand lunch, and after lunch, and a necessary toilet stop on a sit down toilet, it was time to head off.
Roger went to get some maps, because he had accidentally mislaid or sent his back, and Al, Nik and I headed on to start up the Tilt.

In all my crossings, I had never actually been up Glen Tilt before.
At least, not from this end all the way, so I was rather looking forward to it.
Ridges are nice, but so are rivers, and there was a darn sight less snow down here.

Ideally, we were aiming for the Falls, but it was a long way, and it was damned cold, and looking like the odd shower, so the intention was to get as far as possible to make tomorrow's slog into Braemar ok. 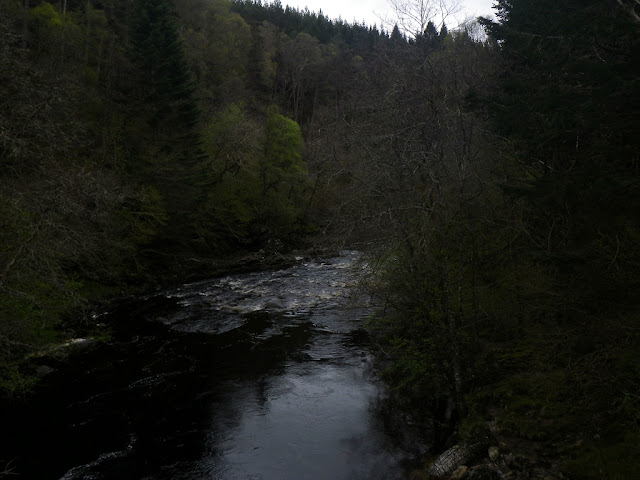 Shortly after this Al started to disappear into the distance.
Probably a combination of food and anaesthetics for his blister.
I walked and chatted to Nik.
A couple of km's further on, Roger caught up with us (he'd got his maps)  and we headed off after Al. 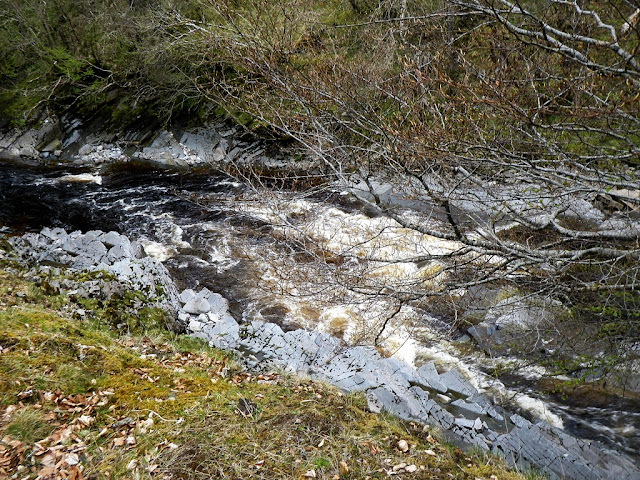 Now somehow at this point, Roger and I managed to leave poor Nik miles behind us.
We decided to catch Al, and stop him and have a rest, and wait for Nik.
We finally caught Al near a small hut before Marble Lodge.
We waited a while, but no sign of Nik.

In the end, feeling a tad guilty for rushing ahead, I decided I needed to head off back down the track and find her, in case she had stopped.
Al and Roger waited and I strode off South again.
As I got round the bend I saw Nik on the higher track.
She had stopped, and so I waited while she came down to where we were waiting.
It would have been wrong to then head off, so we all waited a bit longer in the shelter of the hut.
Although not raining, it was bloody cold in the wind, that we would soon be walking into again.

After a while we headed off up the track.

Al and Roger were soon a long way ahead, and I had again pulled away from Nik.
We were all heading in the same direction though, so as long as we had intermittent stops it was ok.

I passed several people, and eventually caught up with Al and Roger, at about the same time that the rain got harder. 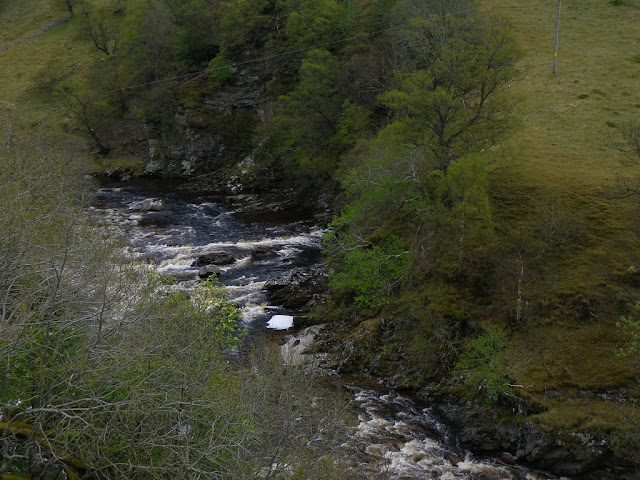 I decided that it was time for full waterproofs.
Al carried on without, and Roger already had his on.
By the time I was sorted out, they had gone, and I could just make out Nik in the distance doing her straight line route regardless of the path. 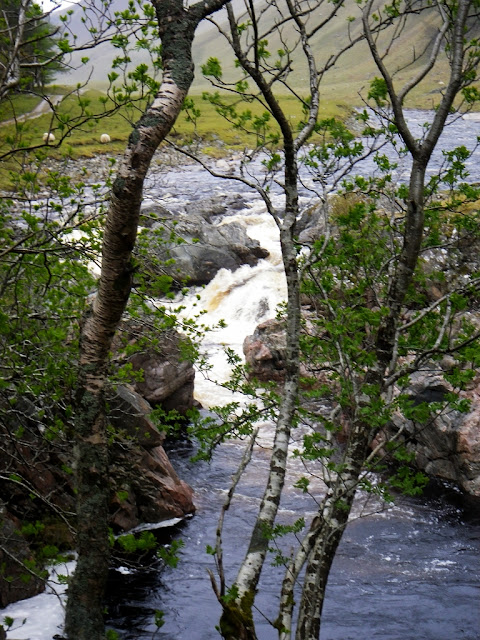 I carried on slowly until I got to a scenic little copse by the river, where I took a few photo's and then waited until Nik caught up. 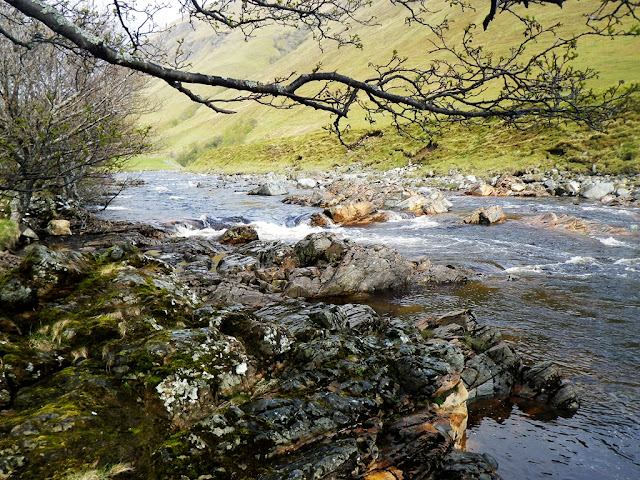 We carried on together and eventually, caught up with Al and Roger who had stopped by the rather posh lodge for a break under the shelter of some trees. 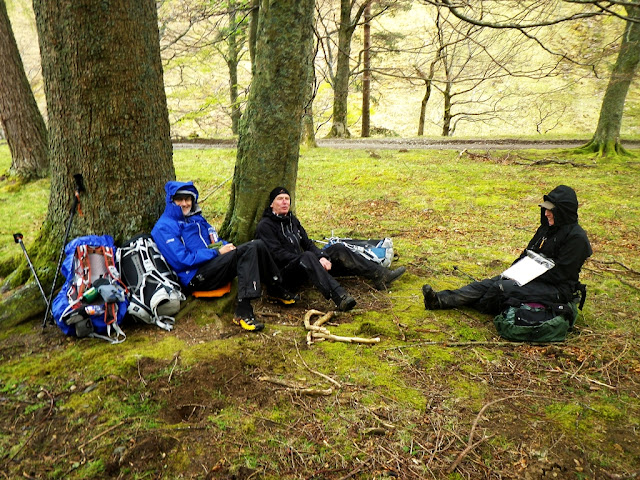 After our stop, I walked with Roger, and Al walked with Nik.
It was still raining, and quite cold and windy.
We decided we would walk as far as we could until we found a nice flattish bit near to the Waters of Tarf

As it happens, we stopped a few kms short of that.

Roger and I spotted a rather fine flat piece of ground just the other side of a bridge across the river, and it also had the benefit of shelter, great views and water.

We waited for Al and Nik, but we all decided, that this was the spot for us tonight, and so we headed over the bridge chose our spots and set up camp.
And mighty fine it was too.


After tents were pitched, and the food thing done, I opened up Treeza as the only night club in town.
I dug out the trusty party speaker, and everyone somehow managed to get into the tent.

And so with Al's bag of peanuts,, that he had carried I think from the start.
A big bag of sweeties that I had carried from Spean Bridge,
Some assorted whiskey's and some Sloe Gin, we had another rather fine and impromptu party right here.
Another good night.
It was cold, but the weather held off, and despite a shower in the night, it was a good morning for a change as well.

Another fine day in fine company, in beautiful surroundings, in the middle of nothing.

And that is really what it is all about, isn't it?


Nosound - "Cold After All" from the Album Lightdark