Up late again me.
No bloody breakfast, but slept well, apart from the fact it was a bit cold, and I woke to find that my bootied feet were toastie, but my arse had fallen off the sleeping mat and was cold.
Still attached though so that is good.

Beauty sleep still not working though :( 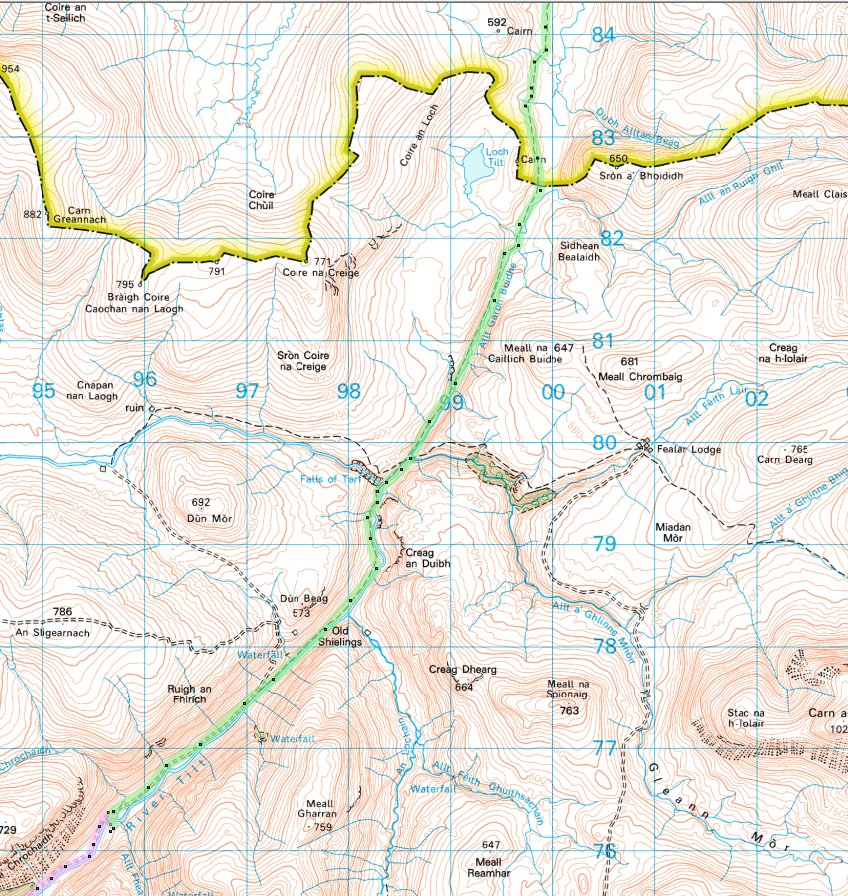 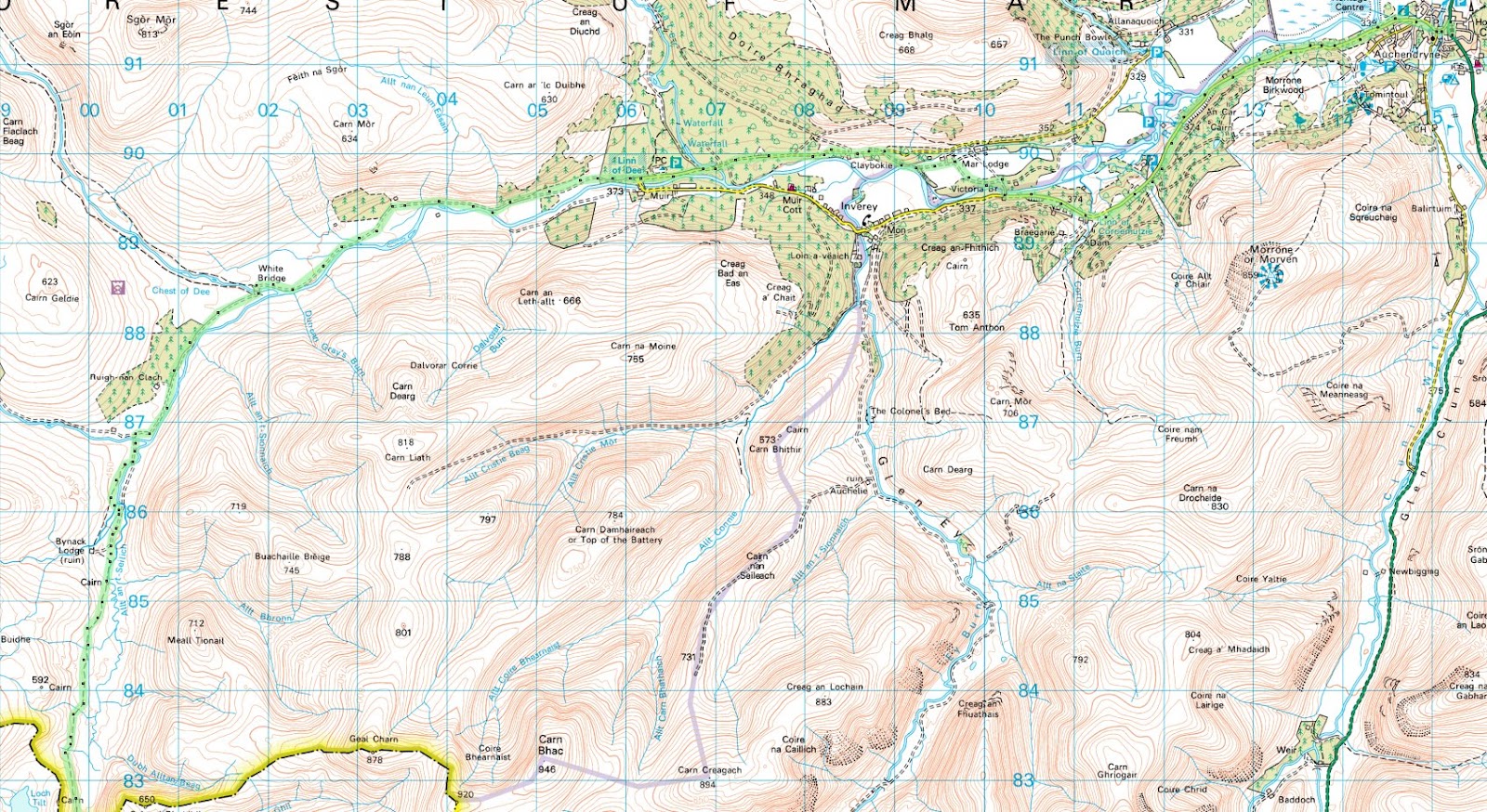 Nik was still in her tent, so we shouted goodbye and headed up the Tilt.
It was still cold, but a nice day, and only distant clouds that may contain rain, but appeared to be a long way off.

Fingers crossed, we set off to the Falls of Tarf bridge


A bit before the Falls of Tarf (I think), we met a German lad, who was about to head up into the mountains.
Unfortunately for him he had no matches or lighter.
This is not ideal when you are likely to need warm or hot food.

Al had a rummage about in his bag for his spare lighter.
He was the only one I think who knew where the spare was.

Always, have a spare lighter and maybe even one of the lighting sticks that you can create a spark with.

Anyway, Al gave the chap his spare lighter, and dismissed the gifts of money and chocolate.
That is not what you do, and anyway, he did not want any more weight to carry.


It is a good bouncy bridge.
Just the sort of thing that makes Al's day

Just after the bridge we had a little sit down.
It was still cold, but the day was good, and I had a bit of a micropore fiddle.
No blisters as such, but a couple of likely hot spots that needed monitoring.

We carried on, along the Tilt.
A long way to go, and we needed to get to Braemar today.

What can I say, we did a lot of walking along the Tilt.
It is a long way.

There was an excellent 2 wire bridge with green supports across at some point.
I am not sure where it was, but it was just one of Al's most favourite bridges (NOT).
Luckily, we did not have to cross it, although it was tempting just for the hell of it.

With a few stops for Al to catch up, and also just to get water and rest our feet, we gradually made our way to near Bynack Stables.
We did not cross there however, but headed on down the track a bit further, until we came to a point near a LRT ford.
We set off slightly left at this point, and crossing a small ditch, followed round until we found a place that there were a lot of rocks.
Two days earlier, maybe one day, and this would have been under water and a wade.
But by cunningly walking on the rocks up the centre of the stream, we managed to get across with completely dry feet.
We carried on through heathery ground near to the left hand side of the stream until we found a suitable place to get across the Geldie, just a short way down from the bothy hut.

This was NOT for Roger and I.
A wade through the stream in shoes. No.
For us it was boots/shoes and socks off.
Then wade across.
It was not deep, but my shoes were dry (ish), and I did not need them to be full of water again.
Al just strode across as he does, and then after meeting a lady whose name I think was Diana, squelched rapidly off into the distance suddenly at a goodly pace, while Roger and I dried our feet and then put our boots back on.

I guess at this point, I should have spent a few minutes sticking some remedial plasters (micropore) onto the odd toe, because I didn't, and by the time I arrived eventually in Braemar, I had managed (shock horror), to have acquired a small blister on the top of my little toe.

Let that be a lesson to you.
Stop it NOW, and then you will not have to repair it later.

And thus with dry socks and shoes, we headed off at a goodly pace in an attempt to catch Al up.
But, Al was in big time yomping mode, and we made very small inroad into his lead.
Consider that this was Roger and I no longer taking it easy, and you will see how fast Al was going.

You will now also understand, why his blister, increased in size by the time he needed to repair it at the bunkhouse in Braemar later on that day.

And there boys and girls is lesson two!

So we hurried after Al, finally catching up with him as he rested leaning against a tree,
somewhere near the ruins, and small wood about 2km past White Bridge.

We had a snack, and then headed off at a reasonable pace towards Braemar.
Next stop was to be Mar Lodge.

We walked on through the Linn of Dee, and down towards the lodge.
As we approached the car park we said farewell to Roger, who was going back up towards Derry Lodge to bag a few big hills. He could not be persuaded top come to the lodge.

Al and I carried on.

I had in all honesty, forgotten just how bloody far it is along that top road, from the Linn of Dee to Mar Lodge. It just goes on and an, and on, or at least it seems to.

After literally hours and hours (maybe 30 min, maybe less), we arrived at the entrance to Mar Lodge.
A short walk down the track, and then round the back, we made our way into the Gun Room, where tea and cofee and biscuits and chairs, and a fire were available.

Several folk were in there, including Andy Williams, who had done something nasty to his ankle, but was determined to carry on.
Which as we shall see later, he did.

Also Tony (he of Gelder Shiel bothy conflagration fame from last year), and a few others.

We bagged suitable sustenance from the wonderful Jane, and with shoes off, sat in the large and soft chairs.

Now this is probably one of man's greatest inventions.
Probably greater than the wheel.
I mean, man had to sit in a nice chair to be able to ponder on and thin k up the wheel.
Sitting in a nice chair, in front of a fire.

Much over rated this hunter gatherer stuff.

Sitter and thinker, that's the one, and that is exactly what we did, for quite a while, until Al decided that there was something very important that he needed to do in Braemar.

"We know a song about that don't we boys and girls?"

And so we set off down the path from Mar Lodge to the road.

Just a gentle stroll into Braemar, that is what we needed.
By some route or other.

At which point Al spots, Diana? in the distance.

"We can catch her, come on"

"Nope, I am having a gentle stroll into town, and anyway, I have to have a serious underwear faff, I am having loose elastic issues"

And with that, Al catapulted off into the distance in pursuit, like it was an Olympic event, and I stopped by the side of the road, with rucksack off, and loosened trousers, in a state of contemplation and adjustment, as several rather posh cars drove past on their way to the wedding reception at the lodge, looking somewhat bemused, at the man fiddling around with whatever, by the side of the road.
Had a police car been coming past, I might well have beaten Al to Braemar.
Luckily, a few minutes and adjustments later, I was on my way.

I thought about going via the woods.
I always normally go via the woods.
So I stuck some earphones in my ears.
Stick on some heavy blues courtesy Eric Gales and boogied down the road.

I finally caught up with Al just before the 30 mph sign into Braemar.

We walked the last bit together, well as far as the Fife, where we somehow got lured in for rehydration purposes.

We spent quite a while here, before heading round to see Ronnie at Braemar Lodge Bunkhouse.
It was pretty full.
We got a bunk each, and them dumped all our kit other than packs onto Dave's bunk.

It seemed very unlikely that Dave was going to be here, but we did not want to let it go just in case, and anyway, we had paid for it.

So we sorted out stuff, had a damned good shower, in the only working shower (not together), had a chat with the many other inmates (mostly Irish), bunged a load of washing into the machine, and used Shampoo, because we had no washing powder, sorted out kit again.
Al had his foot fixed up by Diana?, or was that tomorrow?, I cannot remember, and then we headed back into town.
We may have intended coming back between the Fife and the Moorfield, but whatever the case, that did NOT happen. In fact I think we went straight up to the Moorfield, where sadly, Bingo Wings were not playing this year. On a plus note, we did manage to get a seat, and it was not pissing down with rain like last year.
So a jolly evening was had by all.

Eventually at some time around 11.00 Al said he was tired, and headed back.
I stayed on chatting to folk, and then left about 11.20, suddenly realising, that Al had the only key to the bunkhouse.

I ended up running down the hill from the Moorfield into town, and then as I passed the Fife I had a thought. Al, would never in a million years manage to bypass the Fife.
And he hadn't.
So we sat in the Fife for a while longer, with whiskey and stuff, until eventually, long after last orders, and with everyone there being called terry, because Terry was staying there, and we were not allowed in the residence bar, we had to leave.
So we said goodbye until later today, to Mick, and terry and John, and everyone else, and headed back to the Bunkhouse, where we had to get in quietly, and also get our stuff out of the washing machine, where it had finished hours ago, and into the drying room.

How we managed that without making a heck of a din, I do not know know, but we did.

And we had survived yet another evening in Braemar.


Tito and Tarantula - After Dark
From the movie - Dusk Till Dawn