AND IT WAS TIME!

We got up, got ready, and had a very nice breakfast.

The weather was looking good, and the forecast even better.

We needed 2 days ok weather for the ridge, and for the first time since 2008 (I wasn't on that year), it appeared as if we might get it.

We paid for the B&B, and at about 8.15 (ish) headed round to the hotel to be greeted by a few folk and ANDY!

Who was asking if we might add something to trip adviser for him.

I think there is little doubt that Al will add something.

We chatted with a few folk we met, and signed the book.

I popped a parcel of the stuff I had worn up into the post box (I remembered last years fiasco, and had it already post paid ).
No more waiting at a post office for me.
Just as well, I am not sure that there is one in Morar.

So I got the poles out ready to go.

Remember the pole lubrication issue from an earlier blog?
I will expand.
At a point in my innocent but stupid past, I had liberally lubricated my locked Pacer Poles with
..........WD 40............


I can of course walk without poles


I cannot hold my tent/tarp up without them.


Eventually Micropore on the inside mechanism works.
They are up, and the bloody things are staying up.


Back to the story.

We head off to the beach to dip our toes in the water.
As we passed the station I turned to the boys.

"OK Chaps. Last chance to get the train away from here!"

There were no takers and we turn down to the beach.

I lose my footing one of the wet slippery steps down to the beach, and crash to the ground.

We make it, we take photo's we head back up. 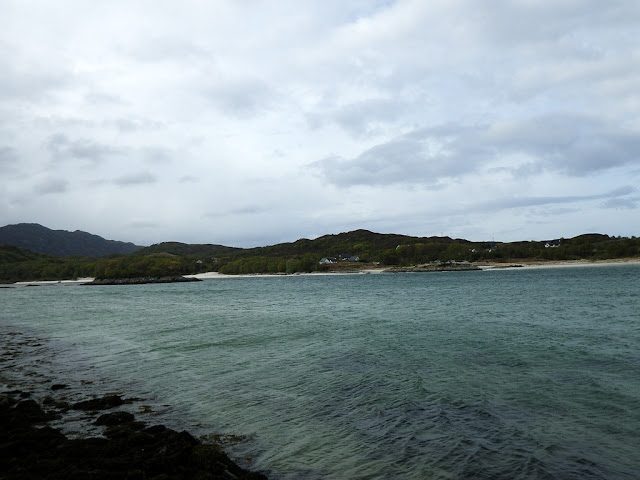 We turn right down the road, but the footpath is not were it ought to be so we go the Looooonnnngggg way back round to the main track to Loch Morar.

On route back we met John Hesp by the small bridge.
He had finally got his tent up a long long way along the beach.
He was going to sign out, so we headed off.

Soon we would be on our way. Honest.

There was a vague rumour of a coffee shop at Bracara, but when we got there it was now a holiday let cottage, so a small disappointment but there you go.
We continued along the North side of the lock

The weather was reasonable until we reached a small stop point near Brinacory island, where the rain came upon us, and water proofs were needed. We took shelter and had a snack in the ruin there.


The rain soon passed over and we were on our way to Tarbet.
Just before Tarbet there is a rather splendid cottage with magnificent views across the loch and to the East.


We stopped for a proper lunch at Tarbet.
It was sunny, but cold and windy.
The wind whistles along Loch Nevis and through the gap to Loch Morar, like a funnel.
Warm clothing was needed.
We watched a small sheep looking for it's mother. I was thinking lamb cutlets.

Dave disappeared and then re-appeared saying he was just popping off for a cup of tea with a couple of chaps.
We did not believe him, but when he did not appear for 5 minutes I went to look in the other end of the Chapel, which doubles as a hostel for £2 a night (yep, really).

Dave was indeed there with two chaps, one being Frank who was 87 and lived there, and also looked after the hostel.
Shortly after this, Al joined as well.
Frank made us all a cup of tea and regaled us with tale after tale.
Frank is an amazing chap, and spins a veritable and wondrous yarn or three,
and swears like a trooper.
All very believable, and all in the main complete lies.
We stopped in for tea, and stayed the best part of 1½ hours.
A bit of a long lunch stop to be honest, and a damned steep climb to come.

There were stories of his life, and also ghosts and other things.
You really ought to go there before the memories are no longer available.
It was a pleasure and an honour to spend time with the man.
Al has a nice picture of Frank in his Blog.

Here is Frank in the Chapel playing the Organ.
I have changed it to sepia, I think he would appreciate that little touch.
I might send him a copy.


As with all things, they must end, and we had a bloody great hill to get up, so off we set. 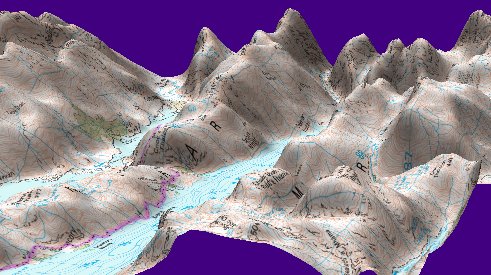 The start was ok, but the climb up the fence line was pretty tough.

Near the top of the not that steep bit was a metal ladder over a deer fence.
I really wish I had taken a picture of it now, because it was not vertical.
How it stayed up I am not sure, since it was at an angle of about 80 deg, jammed into the ground.
There was a single piece of wire attached to the fence, attempting to stopp it toppling over.
It was interesting, especially with a full pack.

As I clambered over the top and down the other side, I was thinking.

"How the Fuck I am going to persuade Al to climb over this".

He did it, but I am still not sure how.
I am sure he had his eyes closed on the descent.

After this bit, we went over another hill and it just went UP.

Dave was off on one of his charges, and Al's 50cc moped engine was working at the back.

It is a very tough and rapid ascent (height, not time), but when you get to the top.

Such joy
Such views

Once we had arrived at the ridge, we met up with John Hesp, who had ascended from further round the bay. Not via the fence line.
With hindsight, that may well have been an easier way up.

As we walked along the ridge, I was beginning to get pain in the outside of my left foot.
This is the one that I had hurt on the multiple injury day about 5 days before the challenge.
My paranoid mind was saying stress fracture, but my positive self just said ligaments, put the superfeet in the shoes.
I hobbled along to the night one camp, favouring my right foot.
It was ok.
It had to be, the descent was going to be far far more strain than the ascent.

Eventually we arrived at what was to be an ideal camp spot high on the ridge in a small wind sheltered basin neat Loch Dubh.
It looked like there might be a bit of rain overnight, so shelters were quickly put up, after I finished being a bit of a tart finding a suitable spot.
This was to be Treeza's (the Trailstar's) first Scottish pitch.
I was about to find out if I had made the correct decision on shelters.

Camp ready, we popped up onto the higher ground above the basin to look at the views, and just stare at the wonder of it all.

With views of Egg, Rum and the Black Cullins all in the distance, as well as Loch's Morar and the other side Loch Nevis.
In fact ALL the surrounding hills were clear.

I could take a hundred pictures, but it would not do it justice.
You just had to be up there


At one point while we were up on the top looking, a huge cloud appeared and began to move towards us.
You could see the rain coming, and looked like Sourlies was getting an almighty soaking.

There were a few spots, but as fate would have it, it completely passed us by.

We went back down to our tents, and a dram or 2 was passed around.

It was getting colder, and time for some hot food, and some sleep.

It had been a pretty tough finish to the day, and tomorrow was going to be tougher than this for sure.

Could it get much better than this?

Maybe, but in a days time, it was going to get a darn sight worse first.