This is a short post, (you'd hope wouldn't you ) since the memories are vague, and the number of people far too many to remember.

So eventually, we got off the train, after multiple visited to toilet and kit packing, we had to walk the huge distance to Glasgow Queen street station.

On arrival at Queen street, there were not many people there.
In fact, it may have just been Alan and myself.
I needed more sleep, but we decided after a shuffle about, that we would go into the bar (because it was under cover), and have a breakfast served by the very nice and may I add pretty waitress.

Al had some sort of full English thingy, and I had scrambled Egg on toast and a huge cup of hot coffee. Cappuccino I believe. Much nicer than the flaccid lukewarm nonentity we got on the sleeper.

As time moved on, and we sat in the rather comfortable sofa chairs, people began to drift in.
Lovely chairs they were, most comfortable, and far too low to be able to eat off.

From time to time Al and I drifted out to see who was about.

The morning passed like this, and eventually Dave arrived from the airport with all his stuff.
Dave and stuff will feature on several occasions during this trip.

We had more coffee, and I contemplated the use of the toilet to no avail.
Must be the altitude, I was feeling quite tired.
Time to acclimatise was needed.
I think the air may have been too thin for a Fen boy.

It was getting later.
Our train was 11.30 something.
The big clue will be when everyone rushes to get on...

Must be time for some pictures 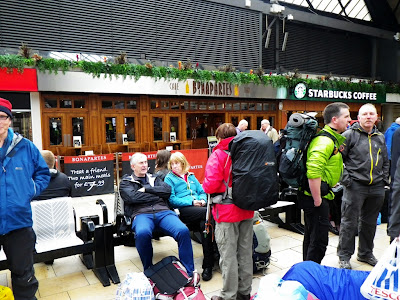 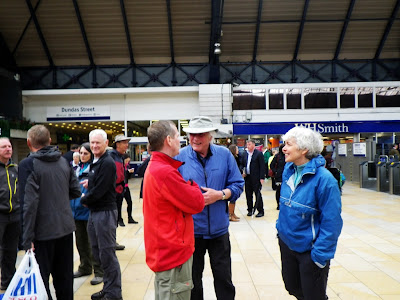 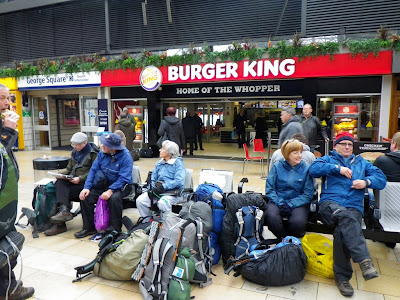 Much conversation ensued.
Indeed conversations continued from last year as if they had been yesterday.
Hands were shaken, and hugs and kisses.

The Challenge is as much about people and friendship, as it is about the hardship and fun of the walk itself.

At some point before this, we had been for a wander around Glasgow, to buy some bread and cheese and stuff for lunches.
Al had got some money out, and Dave possibly ought to have bought some Whiskey, although on the other hand, maybe not.

Soon, it was time to board the train to the West Coast.

Many more conversations with people whose name I ought to bloody well remember later, we arrived at Morar.

This may NOT have been the case altogether, because Al, had wandered off on the train to chat and stuff.
By Crainlarich he was in one of the front four coaches.

The ones that were NOT going to Morar and Mallaig.

I went to make sure he knew, but I could not get on the train because thjey were separating the two parts.
That job done, still no sign of Al.

Al appears with moments to spare

And then we were in Morar.

It is a wonderful scenic journey this train ride, but it does drag on a bit.

Just off the train, we met John Hesp.
He was going down to camp on the beach.

I rang the B&B just to check.

"Just to the right of the railway station behind the Hotel, You cannot miss it!" 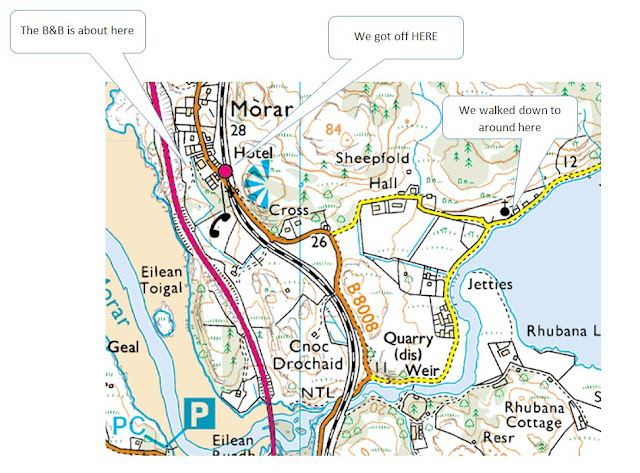 10 minutes (ish) later back at the railway station, you could just see the sign.

Oh to have eyes in the back of my head (like wot me Mum does init! )

At last we arrived at the B&B, and very very nice it was too. 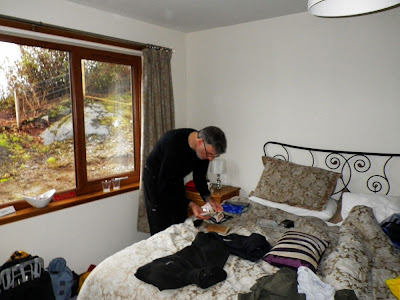 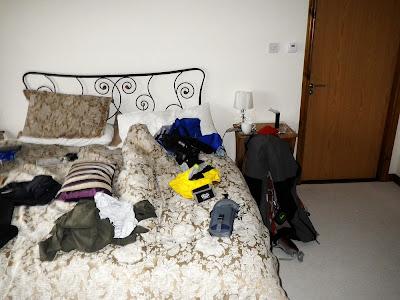 I had to share a bed with Al.
Dave had the spare single.

So, after that we went up to the Hotel for a beer and a meal.
Here we met a few other Challengers, whose names I ought to have written down.

I will get the names from Al at some point, and fill in the blanks.

At the hotel we also met Andy, the Maitre D'.

First impressions, was a helpful chap, and friendly.

Later his overbearing smarminess (is that a word ), began to really grate on the nerves.

Al wanted to hit him.

Mind you, Al does have anger management issues,
he should apply for grumpy old men on BBC.

I cannot fully describe Hotel Andy, a cross between Basil Fawlty and Hanibal Lecter, (although Lecter was quite intelligent).

We had a rather nice meal, and some bevvies, and Dave and Bob, rattled on and on about Volvo's, and Engines, and reliability, and fuel economy,
and modifications, and total mileage,
and sixteen year running costs per second and some such.

What can I say.

I could see Al's eyes glazing over, as he slowly lost the will to live.

I supped my ale.

Eventually it was time to sneak out past Andy


And we wandered back round to our room, for last minute pack checking faff and also to get some sleep.
I made some late night tea