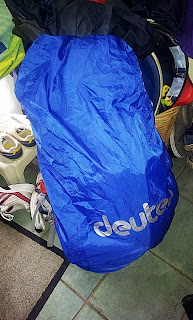 And thus is came to pass, that it was time to go North (again).

I picked up my trusty HEAVY rucksack,

So much for 26lb.
By the time I packed the extra stuff (based on weather forecast )
and the extra bit of silNylon floor,
it was coming in at 31lbs (again)

said goodbye to Olly and Harriet, 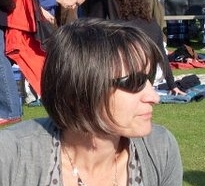 and the lovely Lucy gave me a lift to the station.

Due to the ridiculous and insane 7 minutes they keep the crossing at Cherry Hinton closed, to allow a safety margin?  for the 2 carriage train that passes, we arrived a bit later than hoped.
I now had 4 minutes to get my ticket, and get on the train.
(OK, I could get a later train, but that is NOT the point ).

So of course there is an eeeennnoooorrrrmmmmoooouuuusss queue waiting to buy tickets, get advice and I have NOT got the time.

I decide I will go through the machine, and get my ticket.

2 minutes to go now, as I rush onto the platform, and run down to the train waiting on Platform 1.

Gasp, wheeze, "Is this the Kings Cross Train?"

"No, that goes from platform 7 now, over the foot bridge."

Cambridge has recently had a new platform built.
It is at the OTHER end of this platform, over the New footbridge.

I have about 30secs to get to it.
Expected time to get there 2 minutes

I ran as fast as I could down and over the bridge.
If I can do this, then the pack is NOT too heavy, even if it is heavy.
At the top of the bridge a railway chappy with walkie talkie was speaking to the guard on the train.

"Hang on, one more coming".


What a lovely man.


I burst onto the train, sweating and breathing rather heavily.


And collapsed into a chair.


I was hoping that there would be no more incidents on the crossing.


The remainder of the journey was uneventful. and about 8.35, we pulled into KX.


I rushed down to the underground, a train had just arrived and I leaped on it to Euston.
To be honest you walk most of it on the way to the bloody train.


It is about a 3 minute journey.

However, IF you get on the train going in wrong bloody direction, you go to
Highbury and Islington

Remember, I am walking across Scotland.

If I go the wrong way from Morar, it is going to get damned wet.

At Highbury  I got on the train back to Euston.


And so 12 minutes later I finally got out at Euston.

And, finally, I arrived at the Bree Louise, where Al was sitting with a couple of folk, one of whom was William Burton from Barbados.

A very nice chap was William, BUT I was not expecting that accent.

Well, we managed to Eeek out the time here until it was time to walk round to the Sleeper.
We were on the 23.50 to Glasgow.

After getting to the train, and getting stuff into our berths, it was a bit late to go to the bar.

There we met Freddy, and a few others.
You may at this point have to cross reference with Al's Blog, to pick up on all the names that I have missed.
I should really have taken a photo or 3.
I have no idea, what time we eventually went to sleep.

I do remember trying Freddy's Pemmican.
It was interesting, but tasted like shit. (just my opinion ).
My Father in Law used to eat it in the Antarctic when he was there.

Best place for it if you ask me.

Eventually, it was time for sleep.
Well, as much as you can when trying to sleep in a rocking carriage travelling North at 80+ mph.


However, there was sleep. Well, a bit of sleep I think, apart from the incident with the toilet trip.
Al was on the bottom bunk, and I took the top.
I had moved the ladder to the door end, because it was easier to get up and down via the sink.
However, I had not allowed for the fact that the ladder now prevented the door from opening, so after abseiling down as quietly as possible some time close to 4.00am, I then crashed the door open into the ladder, and of course woke Al up.
He said nothing, but I am sure that is NOT what he was thinking.

Probably more like "Oh God, I've got another 2 whole weeks of this"


Then all too soon, we were woken at 6.30 for delivery of our luke warm tea.


Then it was time for part 2 of the journey, to breakfast, and the Queen Street station to get the train to Morar.


Crikey, all that, and we haven't even started yet.


Oooohhh, it's going to run and run is this!