There was no blinding rush to get going today.
It was a gentle day, shopping and the Fife and long breakfasts and stuff. 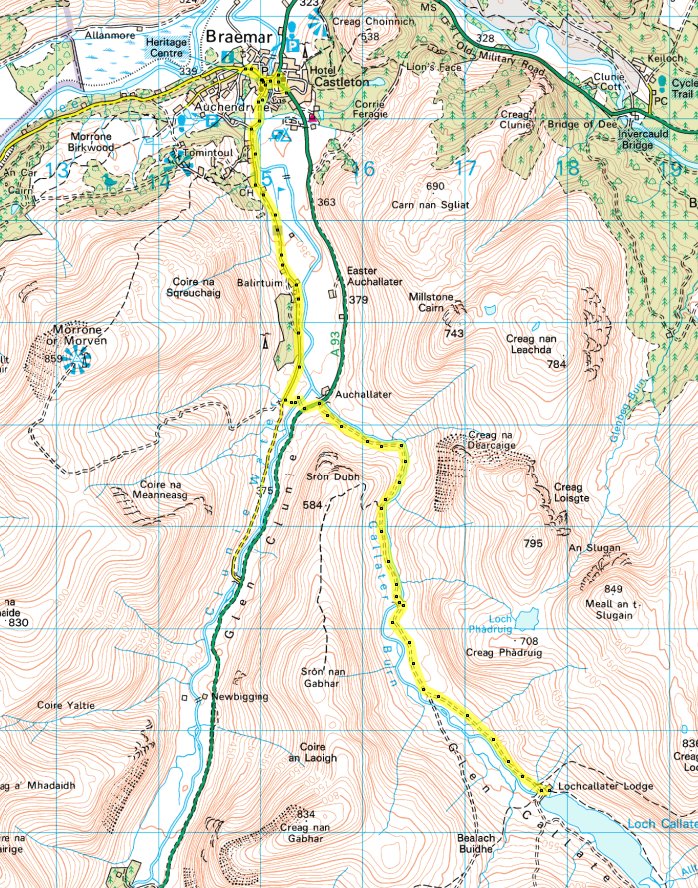 I had woken at about 4.00am in desperate need of a pee.
This was not alcohol abuse, I had been drinking shandy.
I know, I know, but that is what it was.

So carefully grabbing my head torch, and attempting to get out of the bunk without knocking myself unconscious (they are quite low), I carefully crept down the bunkhouse to the toilet.
Taking extra precautions, I went very slowly, and stepped round all the various kit explosions.
Stepped up the step to the toilet area, (I had remembered that step), and then promptly tripped up the second step that I had not remembered and crashed headlong into the wall, waking most of the lads in the end 4 bunks.

My intentions had been good though.

Back to bed, and more lovely sleep.
We did not for a change have to get up too early the next morning, there was not much to do.
Diane was up a lot earlier than Al or I and had been out and about dressed before I even opened an eye to the daylight.

Unfortunately, kit was not completely dry, so I hung it over the radiator near the window.
Today would be a day for the spare Katmandu shreddies.
The longer merino ones would dry out and start afresh tomorrow.

Al made some breakfast, and I made a cup of something or other.
Had a good bash in the bathroom (eventually), and then a longer sit down just for good measure.

By the time we were almost ready to go, Al was bemoaning his gigantic blister.
I had on many occasions volunteered to burst it with my trusty knife, but for some reason, maybe the state of my fingers, Al had declined this offer.
I gave him a blister plaster though, and Diane, who apparently had some expertise in matters medical, cleaned and then put a smart tailored blister dressing on Al's foot. Adding a bit of micropore for food measure to try and stop the Compeed from fusing with the sock.
That is a nasty habit that Compedes have.
I had a go at the blister that had developed on my little toe since yesterday, with some second skin and some tape (No knife). It would get me to Callater anyway.

By now, it was getting close to 10, and we packed up our gear, went and said farewell to Ronnie, and headed down to the bakery for a proper breakfast.

On the way, I popped over to the gear shop, to get a replacement for my spork, which had self destructed the day before. It now consisted of a spoon and a fork, neither of which had handles, and thus it made stirring boiling soup, a difficult and dangerous job. Especially bearing in mind how many fingers I had left without plasters on.

We then also went across to the Coop, to buy some bread rolls for the next few days, and some cheese, cos you need cheese, and something to take to Callater.
I actually ummed and ahed about Ginger Wine, just to be different, and this would have been a good idea, but instead I bought a half bottle of the Coop's best 1 star Brandy.
Later we would discover that this is pretty close to being undrinkable.
It can be disguised with coke, but it is basically a cross between Surgical spirit and Diesel.

Eventually however, we did get to the Old Bakery where breakfast was ordered off the special menu. They are really lovely here, and very supportive of the Challenge.
Now I cannot for the life of me remember all the people who were there.
Certainly over a considerable period of time, there was Di and Charles, and Keith, and Freddie, and John, and Al, and Nik, and Louise and JJ, and Ian, and Ian and a host of others, whose names elude me.
It was an extended breakfast, with the extended Challenge family.
I had many coffees, and then even after Al had gone of to somewhere else, that may well have resembled the Fife, I had stayed on, chatting, and enjoying the cheer luxury of

After breakfast, I took my kit up to the Fife, and then went for a nose round town, to see who was about, but not in the pub.

But of course, at some point I knew I would end up back there, which I did.

Whilst here, I had another bit of a faff with my static Pacer Poles.
They had been jammed since the start, but over time had gotten gradually shorter, which did not help much with the tent height, so I took out my trusty Leatherman tool, avoiding the sharp bit, and used the pliers to prise them apart, and see if I could get them to work any better.

The long answer and the short answer were both NO.

So I re secured them at the optimal height for the Trailstar with a bit more of the incredibly versatile micropore, and then got another Shandy.

We had been asked by Martin, to try and get some 1% HC Cream for Sue.
Unfortunately, none was available on a Sunday.
But I had about 1/3 of a tube in my covers all emergencies first aid kit, so we waited for Martin.
We were going to leave it behind the bar, and then with Louise and Laura, but just as we were about to leave, Martin and Sue turned up.


It was about 3.30 by now, and we decided it was time for
the bloke with the blister and I to walk down to Callater, yet again, via the golf course road, and then over the little bridge.
The weather was fine, although not hot yet, and we slowly wandered along the road. 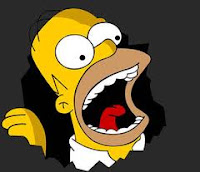 Al was having blister problems again.
The bandage was making it better than it had been, but it was still sore.
My little toe twinged a bit, but Al's blister was by this time, about 12 feet across, and 3 inches high.
Or so you would have thought.

It was a slow walk down to Callater lodge, with Al hobbling along.
But, the weather was fine, and we were in no hurry.
As we came over the bridge to the start of the track at Auchallater , Alistair was there with Isabel. We had a chat, and then started the walk up to Callater.
On the way down, we met a couple of sprightly young ladies with a dog, who we chatted to. Also another couple of chaps who had been up on some tops for the day.
There was I seem to remember some other chap, who did not speak, but much to Al's annoyance (he gets a bit grumpy at times you know), just barrelled past taking up most of the track, as we had to move to the edge. Not a big issue, unless you have a blister the size of Al's.
Al mumbled some stuff about mountain courtesy, bastard and violent acts, and we continued on our way.

Eventually we arrived at Callater.
It was awash with tents of all shapes, sizes and colours, right down to the Loch side.
We pondered about putting tents up, but just dumped our bags outside, and went in for a cup of tea and a chat with whoever was inside.
It was of course full, with all the usual suspects, and Bill, Jeanette, Ross and Mike, where busy serving many teas.
Somehow after greetings, we managed to get a seat.

The Callater party was beginning, (well apart from the tent thing).

Al had some stovies (is it spelt like that?), and I assisted, plus we had extra tea.
Oh yes, and tea.

Al, managed to blag us a couple of beds inside, and that meant that the tent faff thing did not need to take place.
Although powder blue and gold would have added nicely to the colour kaleidoscope outside.

And thus, we took our stuff inside, and settled in for the long haul.

Of course, it was going to be another excellent evening.

It was Lynsey's birthday, and after much effort, primarily from Alistair,
(earlier in the week, Lynsey was not sure if she would go)  she had been persuaded to go to Callater.
This was a good thing, because much effort had been made by JJ, to get her card filled in, by many, and also transport the cake to Callater, with the aid of Jeanette.

The evening progressed in the usual manner, with many friends, entertainment (Mick had come), and a seemingly never ending supply of food, beer, and whiskey.
I even managed a glass (mainly coke) of the diabolical 1 star brandy.

Lynsey's cake was presented to her with a suitable rendition of Happy Birthday, and JJ was fully wound up with songs. 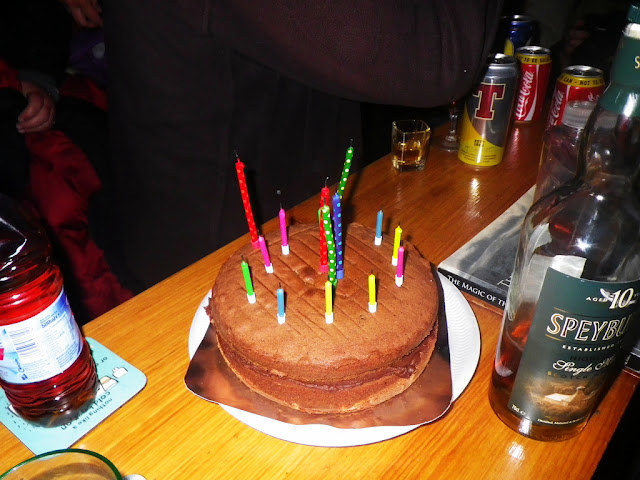 During the evening I met up with Carl again.
Carl lives just near me, in fact very close to our old house.
We had communicated via the Internet, but never actually met before Braemar, although maybe on the train. My recollection of stuff is getting vague.

At some point in the evening, I snuck out to take a couple of photo's of the loch as the sun went down.
One of my favourite lochs this one.
OK, they were done with a tiny camera, and Ian will have taken some absolutely stunning ones, but here they are anyway


The evening continued, and of course there was a never ending version of
I am the Music Man, a Callater favourite.

So, the day became evening, the evening became night, and eventually, it was time to sleep.
Al had snuck off a bit earlier, but I had stayed up a bit later.
There were people in all states by now, some in a worse state than most
well, one anyway, a lesson learnt hopefully. (and it wasn't me by the way). 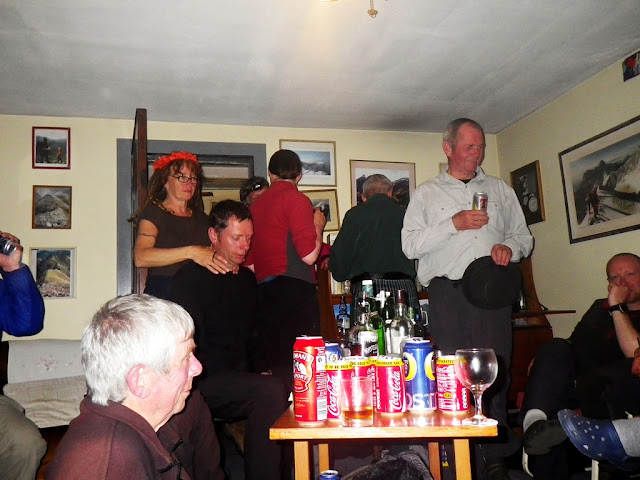 
And that is of course why I go back year after year.


It Takes a Lot to Laugh, It Takes a Train to Cry - Peter Parcek