In which we managed to get PETE to sanctuary,
and my feet really got pissed off.

What your Eyes Have seen - Harry Manx
Don't pass this music by.
Listen
It is brilliantly beautiful

I was going to wait for Al, so I could find out where we went, but I think I can manage today.
What with there being no mist, and no birds of the feathered kind.

I was awake a bit late today, and Pete had arrived before I was packed.
He was looking a lot better.

I scrambled at break neck speed (AHH.. So that is how I fucked my neck up), and got my stuff already to go by 8.00.

I think that this Challenge I was never late leaving.
In fact sometimes I had to wait for Al.
He wasn't late, I was early.

And all packed and ready.
Far less wind this morning thank the Lord, we set off over the the Sheilin.

Just as we were leaving, or maybe just before, Vicky and Toby came past.
OR, I may have dreamt that.

I think Al told them the approximate route, and they headed off ahead of us.

They are younger and fitter than us.

Well, Vicky is! (Sorry Toby mate, I had to get that one in).

So we set off on the well known, but highly indistinct, which in Scottish parlance means bugger all sign of  route to the Sheilin

I think it was his veritable divine self David Towers, who once told me that from the fork in the river, you take a bearing of 105 deg, and it takes you to the bothy.

We slowly made our way over the top to the Bothy.

Landing just to the right.
We had NOT used a compass.


We sat Pete down, who was really not a happy bunny.
Not only was he struggling, but he also had a dodgy knee.

I ferreted into my rucksack to find him some tubi-grip bandage, which by Sid's Law, had gone to the very bottom of everything.
I also looked for some Ibruprofen Gel, but could not find it.
It turned up 2 days later somewhere else.

We sat him down, and Al made him a brew.

Phil may or may not have added whisky.

You can take a horse to water!!

No, seriously, it is just so easy up there to get off track.
Been there, done it, got the T shirt back in 2005.

We spent quite a while at the bothy to let Pete get sorted.

Then we set off.

Vicky and Toby had moved on, with some directions.
We wouldn't see them again until Tarfside.

Sadly, I have very very few pictures today.
I may snaffle the odd one from previous years to pad things out.

We had a short chat with Liz Robertson, and then headed off.

It was slow going up, step by step, with frequent stops to let Pete get his breath.
Exactly as it should have been.
Liz caught up, and as a group we made our way to the top, where we had a rest, before descending down to Glen Lee.

After a bit of a sit down, we headed down.

There are two possible routes.

The old LRT, and just straight down the short or burnt heather.

Many take the LRT, but Al and I took the far far easier heather route.

Fluffy bouncy stuff, which with care will not break your ankle.

And eventually we reached the bottom, crossed the small stream, and slumped to the floor for a well earned rest. Collected water and just sat about.

YES. By day 12 of the Challenge you are a lot fitter than when  you left the flatness of the Fens.

BUT, you are also bloody shagged after Braemar and Callater.

You wouldn't miss them out, but they do you no good at all physically.

Eventually, in dribs and drabs, we headed off towards Loch Lee.

It is all down hill from here (Metaphorically)

A couple of years back we had dropped down the other side of this, as we recovered from the hypothermia of the Cheese and Wine at the Waters of Unich.

I headed out on my own, and somewhere just past the Stables of Lee, caught up with Vicky Allen.

Vicky travels at a goodly pace.

We motored along at speed, and I was grateful to discover Al and co lounging under the tree near the old building that sits in the now cleared woods at Cairn of Carniet (may be spelled wrong, but so are my eyes).

Vicky carried on before us, but we rested again.
There was NO hurry.
The weather was good

Although I tend to travel at a pace that suites me, I have never understood people who do HUGE miles just for the sake of it.
I wonder if they ever appreciate the true beauty that they travel through.
YES, ok I did tend to go faster than Al and Phil at times.
But it was my pace, and I stopped to take photos, and just to look.

Gerry had told me a story back during the Daunder of the walking group that he was with, that never stopped.
They just banged out HUGE mileage.
Heads down, pound , pound, pound.

Yes. OK, there are times that you need to do this

C2C Vale of Mowbray springs to mind.
Miles of same.

But NOT on the TGOC, or in the Lakes.

Actually, very rarely is this needed.

If this is your bag, then take up Fell racing.

We carried on towards Loch Lee.

A bit before there I spotted an Adder.

First one I had seen this year.

Possibly a young female, taking the rays.
It was in the middle of the path.
But soon shot off at speed.

We carried on along Loch Lee.

The wind varied between Blustery and not much.

with Willem and Marianne.

We stopped again at the same place that we met Lynsey last year. (The other half of Alistair).

Lynsey was not on this year, what with it being Alistair's turn (so an almighty bugger that he didn't get a place), and also because Lynsey is due to deliver No 2 in the next generation of Pooler's.
TODAY I think..
Maybe even as I write this.

All the best Lynsey, GOOD LUCK, and see you in October for the Dales Walk.

Anyway, we stopped at exactly the same place.
The start of the Loch proper, overlooking Inchgrundle, just past the bridge

PHIL, who is a mighty fine chap, and also the cause of everything that befell us during this Challenge, gave Al a FREE Tuna and Tomato Snack.

SO, it was VERY BAD form, that after consuming the same, Mr Sloman, gave him BACK the packet to carry out.

I think Tini had packed them for him.
He doesn't like them.

I will leave the rest to you.

I was most grateful.

And I carried the packets out.

Eventually, we headed off to the far end of the Loch, where we again stopped to ease the now really moaning feet at the old Church at Kirkton.

We had a good rest here.

But again all too soon, it was time to leave.

Al came up with a cunning plan.

"I have a cunning plan", said Al

"I can guess your plan", says I

"Pete is not a happy bunny" says I

"Indeed, says Al, and you being the fittest of us", OR the most gullible.
He didn't actually say that

"SO, you want me to go to Tarfside, and Blag him a room"

"Only a complete ***T would say NO..Consider it DONE"

And with that, I set off at a lunatic break neck
(YEP, you can see now why my neck is well and truly ****ed)


Very soon I was a long way up the road.

I met many TGO folk, and with or without the need, regaled them of the essence of my mission.

I carried on, collecting Challengers on route.

I was soon a long way past Westbank

I was a man on a mission.

Somewhere along here, close to Tarfside, I met Dave.
He was just walking back to talk to people.
I told him the story.

What a Diamond Geezer eh! 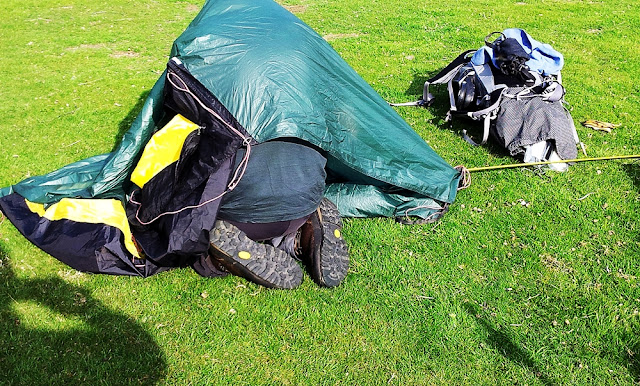 And then I was at St Drostans.

I told him the Pete Saga.

"Yes, I know, BUT Pete REALLY REALLY needs a room, and he can have Dave's"

"I am talking about Pete Shepherd, MORPETH"

"What, you sure, PETER SHEPHERD? Can't be, I left him just past Kirkton"

"No, I have come here at WARP speed, Kirk and the crew of the Enterprise would not be here yet"

"Can't be the same Peter", and I headed of to the Kitchen

I went in, all smiles and hello's

Pete was sitting at the table.

I later apologised to Alvar

As it transpired, a bit further up the road, Peter was SO bad, that Al and Phil had got him a lift in a builders lorry.

The wonderful man was going back towards Tarfside, and gave Pete a so much needed lift

So, DAVE did give up his room, although Pete had got a room anyway.

All the rooms at St Drostans are named after Saints.

Pete was in St Peter's"

I can say no more

I had beer, and a rather huge Bacon Butty

I got 2 cans set aside for Al and Phil, after the farrago of the year before when they ran out (more of that tomorrow)

I generally chatted with all the people, including Russ, an absolute TOP bloke.

I bought a second beer to take out.

We sat around, and had tea, and ran up an enormous bill

And eventually, we had to go to the field and put up tents.


For the first time, in MANY a year, I did NOT order a meal.
I just had too many packets of food left, and I had to eat them.

So I played music, socialised, and cooked my Adventure Food Meal.

And then we went to the Mason's Arms

He had eventually turned up at Callater on Monday having reputedly slept somewhere near the Golf Course.

He was rumour had it on his way to Tarfside

He didn't turn up.

We had another fine night in the Masons.

JJ had arrived.
Waggy was on the Harmonica
Pete and Mick were re-united

Lindsay was there already with her trolley

We will come back to that at NorthWater Bridge

I recited (Under Pressure) the Poem YET again.

And then after a bloody fine evening, staggered at some incorrect hour back to my tent.

I had NOT actually drunk that much.
It was late.

I was leaving my over-indulgence to NorthWater Bridge

I went to my tent

I put on music

Tomorrow we would NOT be going to Brechin

I will explain tomorrow

It was time for sleep.

IT WAS ALMOST FINISHED

MY FEET WERE GLAD

I WAS GOING TO MISS IT

See you tomorrow.
When I am going to maybe over indulge to the extreme.