In which we have another rather long day,
BUT we end it all in wonderful company.


Love me or I'll Kill You - Guitar Pete

And today's musical theme is back to the blues.
Guitar Pete on this one.
Awesome Guitarist
Hey Joe, will appear before the end of the write ups.
Check this man out!

And back to walking

Oh and buy the way, the neck is getting slowly better I think.
Thanks for asking!

Anyway, by the time we get to this, I am woefully behind Sloman's Blog, but more people read his I think. certainly more comment

Sorry, where was I?

It was morning.
We went down for breakfast, which was also mighty fine. In more lovely surroundings.
Better still, the weather looked pretty good for the day, although maybe not warm.
And tonight we would hopefully meet up with folk who had made it to the second Cheese and Wine destination.
Including the wonderful Val.

And yes Val, next time we will try and arrange it in Kincraig, in your garden.


We set off, said goodbye to Mike (he's the geezer wot was in our photo), but I think it was Mikes camera, cos I didn't take it, and turned Left through the entrance and plodded off along the road.

There is quite a hike along the road, but very little traffic, so it is ok walking

The last time I came this way was back in 1995 on my first Challenge when I did the Challenge with Lucy, who was 20 weeks at this point. She is well 'ard, but I was probably moaning about my feet. As it happens I can remember very little about that first Challenge, other than bad footwear, carrying Lucy's rucksack and mine one day, over bloody great dear fences, and uttering the words at some point

"So, I suppose you won't want to marry me now then"

I am not sure what the response was, but I believe YES was in the sentence.
As it transpired we purchased the Engagement Cat in Braemar a few days later.

NOT a REAL Cat, a wooden Cat!

We did not have oodles of money back then, and as it happens for some reason or another, we did not get an engagement ring.
In fact I gave her that on our 10th anniversary.
Better late than never eh

BUT, I digress, as I said I remembered none of this.


And so we wandered along the road, sometimes together, and sometimes not.

At some point, we wandered into the campsite just on the off chance that the shop was open.
It wasn't.
We wandered out again

We carried on and on, until we came to the memorial at

If you read Al's blog, you can read all about this memorial in detail.

Or if you can't be arsed to go there again, here is a link that was on Al's blog about it all


Eventually it was time to head off again, and John joined us.
I think he was off to Newtonmore, or somewhere.
Anyway, his route took him the same way as us, so we went together on this bit

As we came to the end of the road, and close to the crossing the A9, we met Ian Shiel (Leg End and Vetter) who was in his camper van. We stopped for a brief chat, but eventually, had to head off.
There was still a bloody long way to go.

We were soon heading along the OLD road, which apparently at some point had an underpass.
As it happens this did NOT materialise, but there was a small access road that took us up to the crossing point on the A9, where with a pack, you take your life in your hands, to get across to the track to Phones.

We survived and started the climb up to and then sadly down to Phones.
Interestingly, it is not spelt Phones on the map.
I think it was Phoines, or something similar.

As we finally approached the house, a vehicle of some sort came along.
Al and Phil were on the left, and John and I on the right.

Now I have to explain here that Al, has many many anger management issues that none of the rest of us have.
Probably years of medication.
BUT, when cars go past, Al like everyone on the same side of the road.
Something about GOALPOSTS.
I had encountered this strange road perambulation Feng Shui before, so like a good boy, I skipped across to Al and Phil's side. But John did not.
Apparently this was WRONG TOO.

But no one died, and the world carried on, and Al forgot all about it, OR DID HE, now that I have posted this.

We passed through Phones, Phoines....and followed the track up to eventually join the rather FINE and grassy (briefly) General wade road.

Just after the small lake, we stopped for a spot of lunch.

A brief moment without too much rain, that allowed us to relax


I received a text and said to Al.

"I just got a text message from someone called Vain Dave"
"Not sure who it is mate, but he's asking about the party"

Al, had a bit of a ponder

"You need to wear your glasses, that was ValnDave!"

SOOOooo Embarrassing, it would become a laughing matter later on.

I texted Vain Dave, and replied where we were, and that I expected that we would arrive there around 7.00pm

All good things come to an end, and we needed to head on, which we did.
At the point on the route (above) where we turned right, we said goodbye to John.
He was going to finish on the Friday, so we would not see him before we left.
Jolly nice chap John, hope to meet up again sometime.

And so we turned right, and headed up.

Some good views form up there, and a lot of evidence of there once being a quite large settlement, with lots of old remains, and a huge wall.

It is a goodly hike over towards Bhran cottage.
About 6k, by the time that you get to the river crossing before turning right.

At the end of the track before heading off into more somewhat trackless bog there is this fantastic little hidden bothy.
It has seen better days, and you wouldn't want to sleep in it 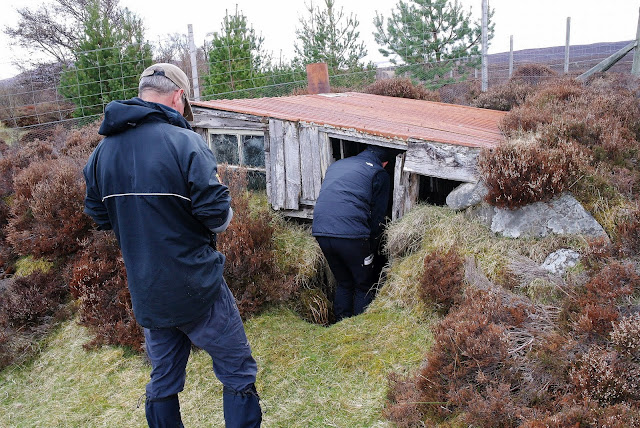 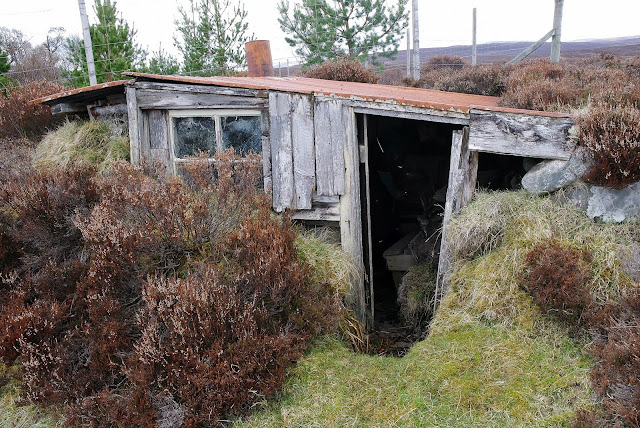 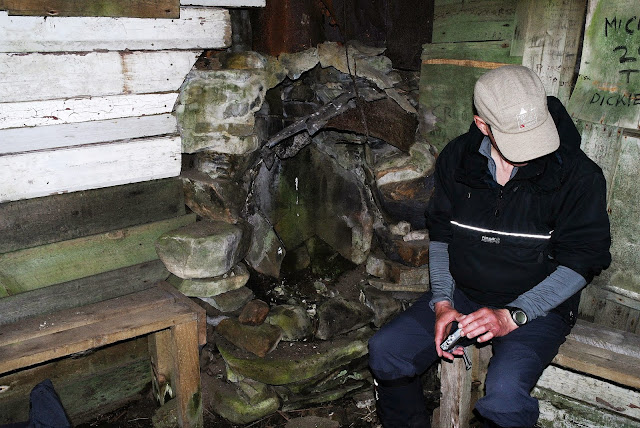 It is quite hard work, despite the fact it is not a huge ascent.

The weather was not bad, but on the other hand, it was not going to be a lovely sunny day.


After a fair old time, we eventually got down to the other side.
We stopped for a long rest, and Al nodded off.
Well, I think he did.
He was certainly knackered


We headed off towards Bhran cottage.
At least now, the going was a bit easier.

Mind you, there was still a bloody LOOOOoooonnnng way to go.

Al had dropped off the pace, and soon we had left him behind.

He had needed to find his gloves.
He was feeling the cold, even though it wasn't that cold.

Phil and I slowed up, and eventually by the time we got to Bhran cottage, Al was back with us.

It was along this bit that I had walked through a small, but very dense patch of midges.
About 3 feet across.
That's all of them, not a pack a 3ft midges.
That would have been bad.

Just after that Al reported that he had walked through them as well.

We saw no others all the way across


We decided that we would take the higher track.
It goes up from the cottage, and although briefly steep, it flattens at the top, and gives a nice walk to the weir crossing to head up the Minigaig.


As we approached the weir, we could just see two people standing at the far side.

Eventually when we got there, we saw that it was Pete and Nigel.

I had walked this way with Nigel and Roger back in 2010.
Pete was with Mick, but he had headed off on his own.
Pete was struggling a bit, and there is more about that coming later on.

We stopped for a chat and to get some water.

Nigel and Pete headed off.
They were going to head over towards the Feshie, but we were going further up the river.

We headed up to the track.

At some point Al had taken a bit of a tumble.
Tiredness I expect, and had fallen and cut his finger.

We stopped and Phil patched him up with plasters.

We headed off again, along the track of varying distinctness towards the party location.

Ted was not with me this year

It was a long, long way along the river.
The path gradually disappears into nothing.

Eventually however, I got to the party location.

By my watch it was 3 minutes past 7.
Al and Phil were a bit further back.

There were a few folk there already including Les and Issy and Alan Rayner and his wife.

I did not recognise Alan.
He had to remind me.
I had bought his old camera off him, a Samsung NX10.
Had it with me.

You can read Alan's excellent write up HERE 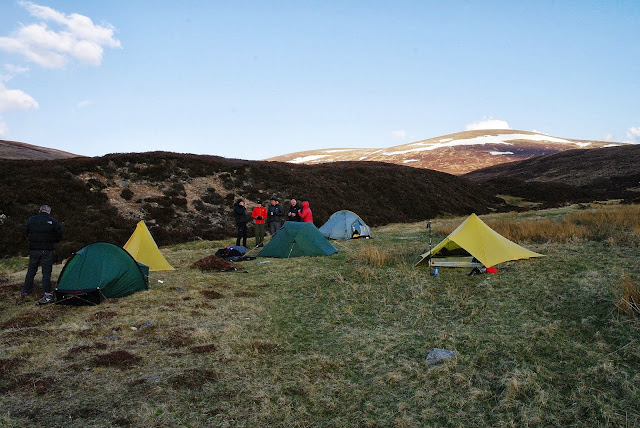 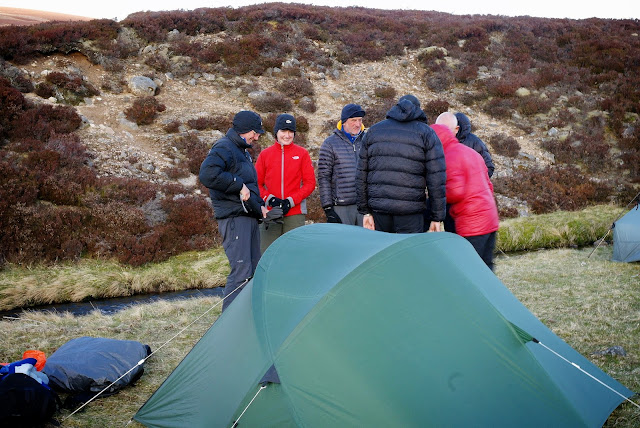 We set up tents, and then had a drop of wine.

The others had started before we got there.

Eventually Val and Dave arrived a bit after 8.
They had cycled to the weir, and then walked up, but underestimated the distance.

Val and Dave unpacked huge amounts of Cheese and Biscuits and Wine and stuff.
Al broke out the Cheese from Humph

And the party really started in earnest. 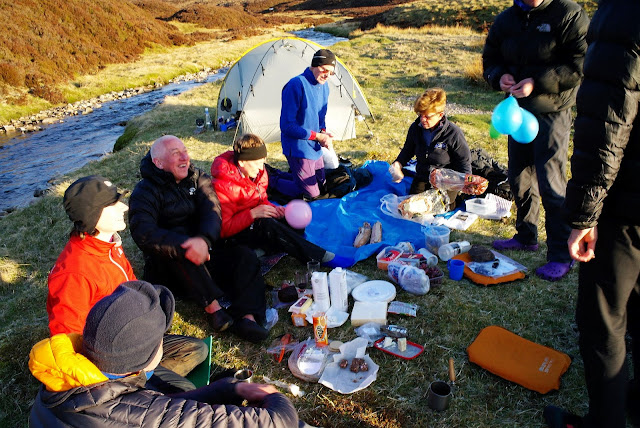 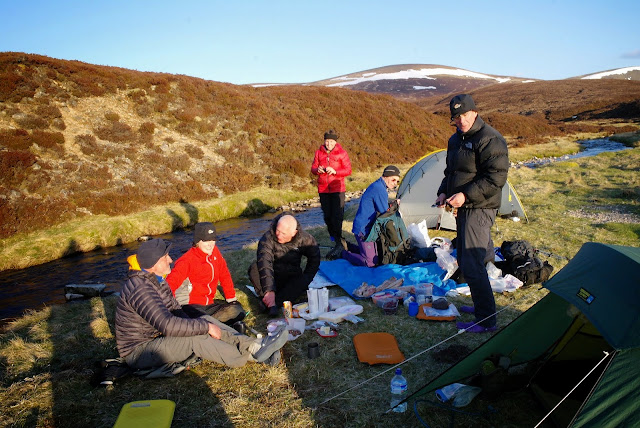 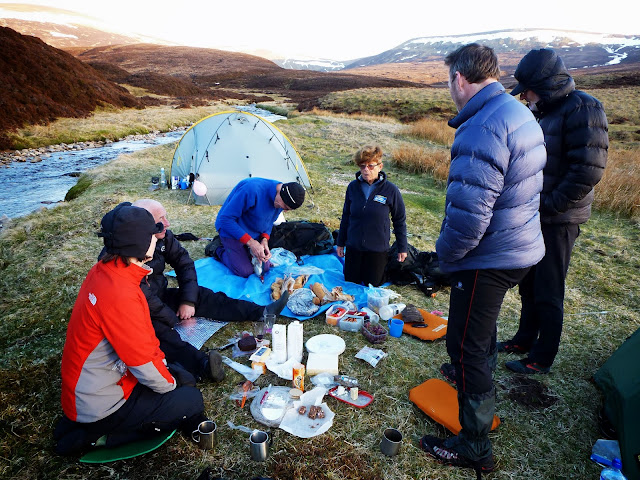 AND YES, Val did bring balloons :-)  She and Dave are bloody wonderful!

As the sun set, the temperature dropped quite dramatically.
Warm layers were indeed needed.

I do not know how Phil managed it.

Either genius, bloody lucky, or divine intervention, but it was the perfect spot for it. 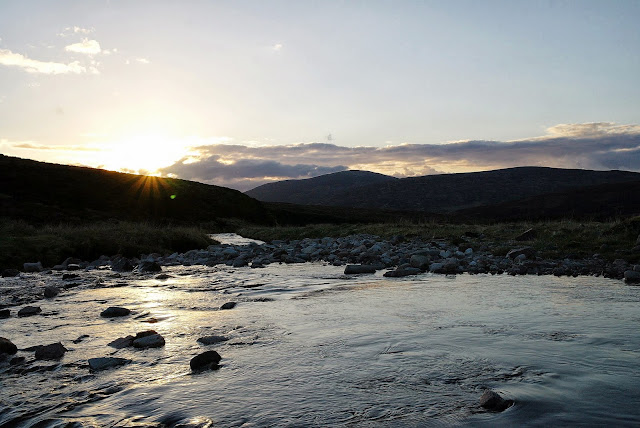 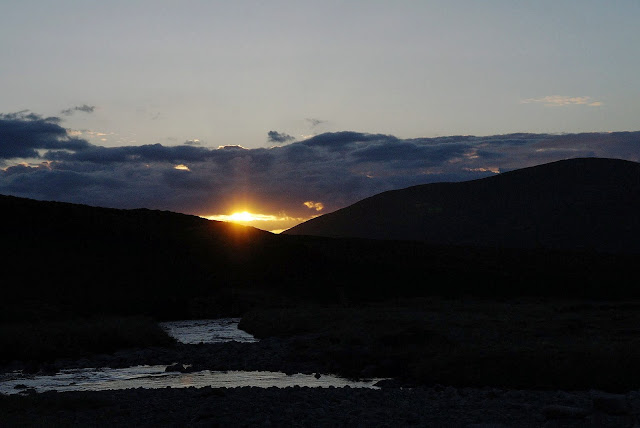 We had a cracking evening.

Al was knackered though and went to his tent.
He was soon asleep.

This was to be an Epic Journey as we shall hear tomorrow.

As they went off, I noticed that Al was spark out in his tent, but the inner and outer were still opened.

We tucked him in, and did up the zips.

And then it was time to say goodnight, and get some sleep, if we could in the temperature.

I crawled into my sleeping bag with everything on.
And even then it was a cold night.
Too cold to go for a pee until just plain desperate.

I may or may not have slept well.

It had been a great day with a fabulous and beautiful scenic finish, in great company.

Tomorrow we had another long day, starting with a big climb.

We did not know how long it would be yet.