It had rained as far as I can remember most of the night.
I wondered how Phil's small Akto island was fairing just round the corner in the bog.

I checked and there were no tyre marks across my torso, so all was marginally good.

I believe that the rain stopped about 5.15 am (although it had started again as soon as I went out for a pee).
I had crawled back into my tent, and evicted several slugs from the porch area.

Now on a Trailstar, the Porch area is bloody massive.
You know what I am saying.
For the most, I did manage to get the tent packed away without rain.
But it was still pretty damned wet.

Strangely we were all ready to roll at about the same time.
Just a bit of a trudge down the nature trail back to the road and the track (err..North)
We could hear what sounded like a motor, or turbine.
Eventually Al correctly identified it as a road sweeper.

Listen, no one comes up here, but the posh buggers still have a road sweeper to do their big posh route home.
We don't even get one of those.
Al dumped his rubbish in the litter bin of the house.
They would probably complain, but at least we didn't leave it on their NICE FLAT LAWN.


We turned left and headed up the track.

UP, it bloody well went up.
It was far far too early for up.
It was all Phil's fault!

A bit of a trudge up the grey Landrover track.
We carried on up into the wooded area.
There was a lot of forestry work going on here.
There was a bog RED sign saying no unauthorized entry.
It was Sat, no one was working, but we would have gone anyway, because there was no alternative

As the track split, we took the left fork which climbed up.

It was raining, but briefly as we headed up towards the top, (well top of this bit anyway), and lots of piles of cut logs the rain eased off a bit.
It was going to turn itself on shortly after, but any lightening of the deluge was welcome.

There were NOT going to be many pictures in the first 2/3 of today.
It was a bit of a head down and brief pause job.

And it was a long way over to Ballachullish 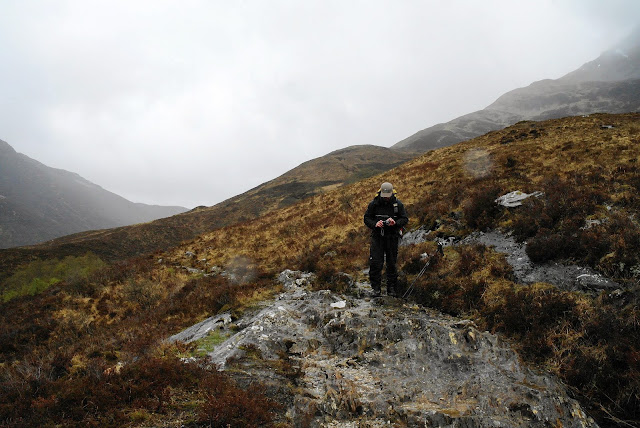 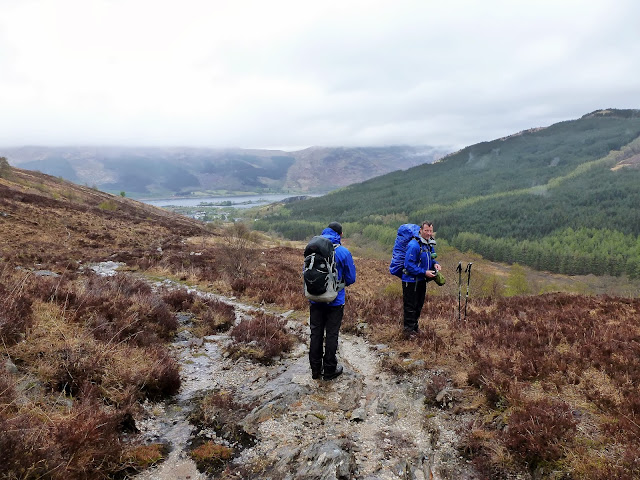 And so with a lot of track and bog and stuff, we eventually made our way over the hills, and up through nasty boggy ground where trees had been removed, and paths NOT replaced.

It was wet and pretty miserable going.
With a bit of respite from the rain, there would have been some nice views and photos.

THIS was not going to be one of those days.

Eventually we arrived in Ballachulish.

Phil or was it Al, remembered that there was a small shop.

We hoped for maybe a coffee shop.
There was one we were told.

No pub Al had said.

As we crossed the road on the corner, just passed the shop heading to the coffee shop, I turned and said to Al and Phil

And low it came to pass that just round the corner there had been bestoweth on us a hostelry of fine ales and other comestibles for the purchase and eating thereof.

T'would have been wrong to walk past, so we went in.

Peeled off assorted layers of wet gear, which we hung and placed over radiators.
And from the lovely lady who was there, we did indeed purchase fluids needed for the prevention of dehydration, and other items from the menu that would provide us great fortitude for the next part of our quest.

And we stayed as normal for a goodly length of time, in order to become drier externally, and wetter internally.

Alas at last it was time to leave, and with a thank you, we headed out.

It had stopped raining.

We walked about 100m and it started to rain, and then pissed down.

We rushed to the Village Hall entrance and hurriedly put on all our now dry wet gear.

Covered again, we headed off up the road, next destination Glen Coe

It stopped raining, it got warmer, and within no time flat as is typical of bloody Scottissh weather, we were now too hot.

There were flickers of Sun and God forbid BLUE SKY.

Now, here is the question...

Do you take your waterproofs off and inflict the wrath of the rain God.

Keep them on and sweat like a trooper, and still get soaked

We stopped, took them off, and headed into Glen Coe Village

Where, we came upon a

Time for Tea and Cakes?

We stayed for about 40 minutes.

The weather was still OK.
We had a way to go still, that involved UP

This is NOT good for Fen Boys

So we decided we had better start

Up and over the Bridge of Coe we went, then a sharp left turn to take the track towards the woods.

WE DIDN'T, but TRUST me.

If you are going to get lost anywhere on the Challenge, the most likely place is when leaving a bloody town.

There are tracks and things everywhere, all for local dog Walkers.

On this occassion we guessed well.
Tomorrow we would have to back track a bit

We headed up over the hill through the woods.

The track up once found is pretty good for the most part.
There are some great views back to the Pap of Glen Coe, and down to Loch Leven


The long long track eventually joins up with the road.
And a nasty wet slippery traversing descent at the end to get down to the road

We found the place to pay, and had a chat with the lovely lady there.
She gave us a discount on the camping, so it came to I think £6 each (might have been £7)

We walked down through the camp to camp by the edge of the Loch.

The weather this evening although a bit windy was good, and we put up our tents.

NOTE.. The ground here is bloody hard, and I had to use a rock to hammer in my pegs.

But the pitch was flat, and the facilities good, so we managed to have a good shower (NOT TOGETHER OK).

Cooked some food for the evening, and manage the odd dram or three.


And thus we come to the end of Day 2 of our challenge.

It was nice to finish with some dry ground.
Although, it did rain again in the night, it was dry again the next morning, which is always a bonus.

But we will come to the NEXT morning in good time. OH YES!