In which we arrive in civilisation rather bedraggled.


Hey Joe - Guitar Pete
It was time for more blues wasn't it.
Yes it was

We woke quite early I think.

I had to borrow Phil's trowel, to go and dig a hole as a matter of urgency.
I did this, hoping that no one would come along the track, whilst I had my shreddies round my ankles whilst trying to maintain an element of balance, with the wind rushing past my nether regions.
How the hell Scott managed I will never know.

TOO MUCH  information I hear you cry.

NO SIR, TOO MUCH would have been the Photo....OK.

So, back to the day

It was one of those days with to be honest few photo's.
NOT because the weather was that bad (well, not until later)
BUT because I have done this bit so many times, I could think of NO reason to take any.

Maybe I should have, because there are always subtle differences when you look back.

Well, as you can see, it was all downhill from here.

Although we were lucky with the weather at the start, it was very windy almost to the Linn of Dee.

We set of up the hill, noticing a dead sheep about 100m from where we camped. Luckily nowhere near the source of our water, and anyway, I had boiled all mine.

The walk down to White bridge being very familiar old ground.
It was wind all the way, buffeting even at this low level,

By the time we got to the Ford where the track from the Tilt joins, Al was ready foir a stop, and we were all ready for a moment out of the bloody wind, so we made our way into the old ruined house.
No sign of a soul all the way up, not even a sign of tents at Geldie Lodge.

The building is now roped off with scenic red and white tape. Very rural, with signs saying no entry and danger.
So, we went in and had a sit down.
At some point it must have been a fine building, but now it is definitely "a bijou property ripe for development."

We stopped for a sit down and jelly babies.

This however, was not going to get us to the Fife, so we had to head off.
We strode round the corner, into even stronger wind.

I began to pull away, and was a long way ahead by the time I arrived at the ruins past the woods about 2k from White Bridge.

I stopped for a while, but it was cold in the wind and I headed off towards the Linn of Dee, only eventually stopping when I had a chat with an older chap and his wife who were walking in the opposite direction.
They asked me how far it was, and I said from here about 3½k, but that it was pretty windy.

"That's alright, we have an umbrella"

Fair enough I thought, that should sort it.
I had a vision of seeing one of them hurtle past up the Dee, a la Mary Poppins on steroids.
But alas, no such spectacle.

By now, Al and Phil had caught up, and we headed up the Linn of Dee together.

Once into the shelter of the trees, the wind was hardly noticable 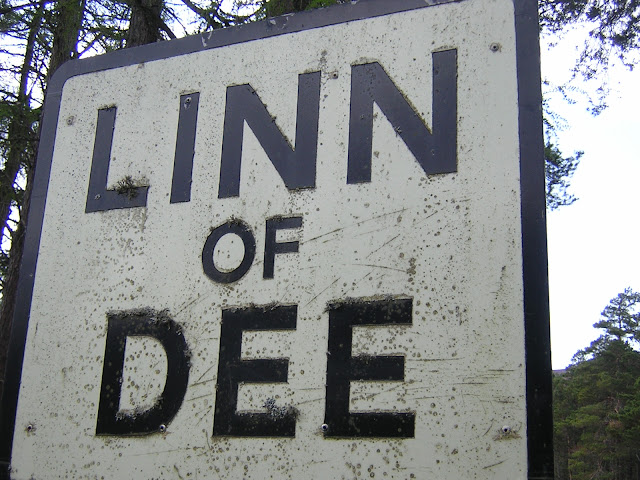 Now, back in 2012 when Al and I came this way looking somewhat scruffy, a couple who had been walking casually back to their car, ran across to it far more swiftly and jumped in.

"Maybe I should go and lick the windows"

I didn't, but looking back, a part of me, who we will call Mr Hyde, always wished he had.
Just for a laugh.

I generated the pose again, but I don't think that AL really captured the spirit of it.
I think by the time the photo was taken the moment had passed.

Anyway, there were no passers by to leer at or torment. 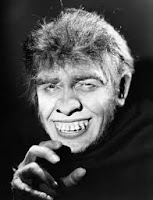 The year before I was somewhat more dapper

So, we headed off to the car park, just past the bridge across the river 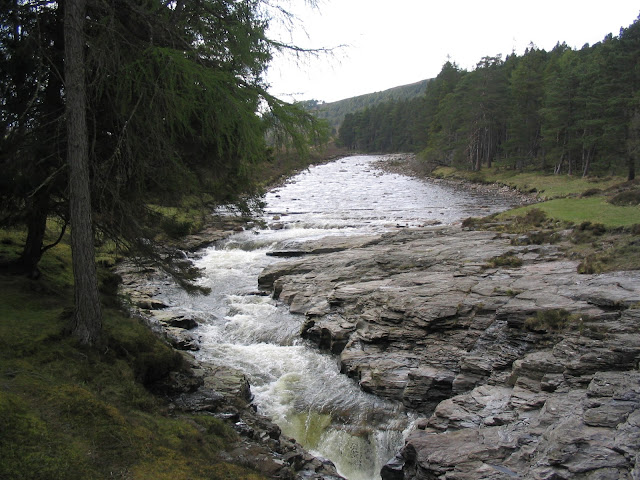 By now Phil was in need of his second movement of the day.
Phil moves quite a lot.
He had been holding back

So, imagine his HORROR when the first toilet said

"NOT IN USE, COMPOSTING!"

TO BE HONEST, SO WAS PHIL,
so it was lucky for him, us, and much of the Linn of Dee, that the other one was in use.

Al and I decided that we would head off to Mar Lodge, and let Phil catch up.
It is a long way to the Lodge from the Linn of Dee.
You think it isn't, but it is nearly 2½ miles.

Phil caught us a bit short of Mar Lodge, and we sidled in together, just as it started to drizzle with rain.
I had expected the place to be heaving, but when we got there, there was no-one there.
We were in the Gun room, and helped ourselves to tea.

Al sat down, and I made and served him tea.

He wasn't a well man you know!

We sat in BIG COMFY Leather chairs, slipped of boots and shoes and relaxed.
We had MORE tea
Then MORE tea...

A few itinerant TGO stragglers came and went, finishing with the arrival of Dennis.
But more of Dennis later on...
Some chap came in bemoaning the fact there there was no WI-FI at Mar Lodge.

I have had better, but not at the time.

WE HAD MORE TEA

It was time to go.

We headed over the bridge and up the road.

IT WAS ABSOLUTELY PISSING DOWN, IN RODS!

I had planned to go via the Woods.
In my opinion the best route in.
BUT NOT TODAY

Today was a head down and walk day, and hope to not get wiped out by a car with poor visibility.

And this is how we headed into Braemar.

Al's trousers were now of course saturated, but he is a man of his word, and his word was wet.
To be honest, by then, there was bugger all point putting waterproofs over them anyway.

My waterproofs had failed earlier in the Challenge, and today even in this I was completely wetted out by the time we got into town.
More of this in kit review later.
Probably like the kit review I did last year that NEVER happened.

Having said that I do have an Innov8 whinge coming as well as the coat.

By the way, the coat is all cleaned and reproofed now.
I probably won't use it next time.

We arrived in Braemar and headed to the Fife.
It was HEAVING with Challengers as was the cafe.
Too many names to mention,

BUT, ALL the usual suspects were there, and a few more besides.

We settled in for a pint.
It may have extended to 2
I think Al had 3 minimum.

It was warm in the Pub.

We needed to head over to rucksacks....

I shall expand and explain

While I was socialising,
AL had negotiated a room in a Cabin at the Braemar Lodge courtesy Louise and Laura.

"BUT we have room booked at Rucksacks with Kate", I said

"Tell her we can't make it"

"BUT I have a parcel there"

"Go and get it and tell her we aren't coming"

"I'm going to the Cabin"

So, I am now very embarrassed at the situation and feeling morally wrong.
What do I do.

I ring Kate to say that we are not going to make it, and to sell the bunks.
I am hoping that there will be a few people after the room, what with the shit weather (again) and all that.

I go back in and tell A OK.

(Other stuff happens here, but to finish the story)

Later that evening Pete comes up to me, and tells me that Kate had said back at the bunkhouse

"Andrew and Al are not going to make it so there is a room free."

"Oh NO, They are here, I just saw them in the Fife", some REALLY helpful Twat spouts..

Sorry if that was you, you weren't to know, but at the time I just thought TWAT!

"OH FUCK!", "I will go and see her tomorrow and offer to pay for the room if it wasn't filled"

To be honest, I was going to do that anyway!

Well, it was all fine, and we will come back to this tomorrow.

Get settled in, and I end up somehow with the task of taking all our wet and in need of Hygiene stiff to the laundry room, along with some of Laura's.
Takes these coins, and only has these settings, and we can't over cook all the special merino clothes and stuff.

Three trips and several £££ later, and just before we went back into town, I managed to get MOST of the stuff dry.

I was going to use the drying room, but there was some NON TGOC walking mob in, and they had taken it over with boots and rucksacks, and all manner of shit that didn't need to be in a drying room, but was.
So I put MORE ££££ in th dryer, and took the sensitive still bloody wet stuff back to the Cabin.

AND THANKS TO LAURA'S BLOG where I pilfered this from

Anyway, all was done.
We were cleaned and washed, and in a lovely room (even sharing with Sloman, the room, JUST the room)
and eventually headed back into town for doing Braemar and Fife Arm things.

It was still raing, but getting better.
The forecast for tomorrow was good.

The forecast for tonight was mainly BEER.

We headed off to get some food, and then made it back tot Fife for an evening of TGOCing.

It was a good evening.
It was a fine evening
It was a glorious evening of friends and fun.

For some it was slightly more than a GOOD evening.

By the time that we were all being turfed out, way beyond turfing out time, there was the dreaded call.

"ANYONE KNOW WHERE DENNIS IS STAYING?"

Well, no one really knew, least of all Dennis, who was in a state somwehere between planet Talisker, Planet Coma, and Planet Death.

The bar staff wanted him out.

And so it came to pass that Al, Alistair (The Cheese and Wine God), and I ended up somehow carrying Dennis to Rucksacks.
This was NOT helped by the fact that we had NO bloody idea where it was.

We were aided here however, by the Fife staff, who were more than happy to tell us, in order to get shot of the incumbent body that contained remnants of Mr Pidgeon.

We somehow got Dennis across the road and into the Bunkhouse at Rucksack.

We left him hanging out the door waving goodbye with the parting shot.

"Get the Fuck inside Dennis, find your bunk and we'll see you tomorrow"

And we headed back.

"WELL!" I said to the other two.
"Fucking hope he was staying there"

IT HAD BEEN CHALLENGE SATURDAY YET AGAIN!