A day in which we have a genteel Stroll to the hotel,
which is actually further than it seems
And Al finally loses it with the TGOC Fleece!

So yeah, not everyone wants the music, but then think of it like this.
It is one click to turn it off, and I may be broadening your musical horizons to a wider and more eclectic experience.
If on the other hand you like Status Quo, U2 or anything similar, then you'll possibly hate this.

So just click it off and carry on, because there is no hope of your musical tastes being improved.

If you are, then welcome to day 6.

I have nothing to rant about, because I have NOT got one of those big fluffy girly fleeces like Al.

What I would say, is that from the Bree Louise until the point where he actually used it with a BIG rucksack, Al waxed lyrical (and even beforehand), about the wondrous, voluminous and marvelous warm Fleece he had bought.

So it was interesting (at first anyway, BUT OHH GOD How he went ON and ON and ON....) to hear how he changed his mind as we walked,
Every ****ing day.

And so Al's fleece gradually transformed itself into a short sleeve high pile Boob Tube.

There were times when after removing his waterproof layer, Al looked like he had Popeye's Biceps along with Olive Oils forearms. (You get the picture).
Anyway, it is apparently a useless pile of shite, and NOT fit for purpose. 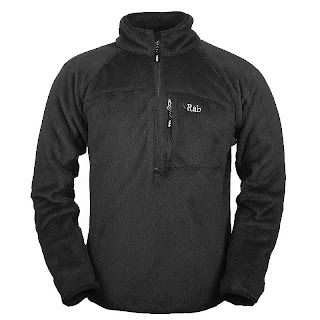 You can read the full review on Al's day 6 blog
I cannot comment on this, because I did not buy one, what with having too many fleeces that I don't wear, and also not wishing to stump up that much money for a big girls fleece :-)

Anyway, it was the start of day 6. 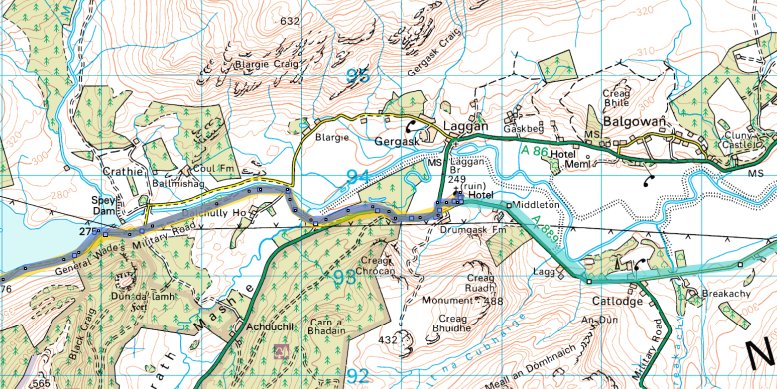 I had got up quite early, about 05.45 I think and gone for a pee.
I then went back in to get my camera, because the light was just superb.
In fact, my photos will not do it justice. Andy (that's the other Andy) was already up.

It was a fine morning.
I went back inside and crawled back into my sleeping bag for another hour of rest/sleep.
But, all good things come to an end.

Eventually it was time to get up, and make a brew or have breakfast, or whatever normal people do while I am getting an extra 30 minutes sleep.
Today I had to get up, to try and use the bothy shovel.

The bothy shovel at Luib Chonnal was like the saw, and Al's fleece Marginally fit for purpose.

I should have taken a photo, since it was held together by rust and a whim and a prayer.

Not the first to venture forth, I took trusty spade to go and dig a hole.
Since the near cataclysmic toilet episode on day 3, I had been regular as clockwork.

Hole dug, I used the spade as a support.

With hindsight, this could have proven to be a very bad idea, but luckily all was good.
The dreadfully deformed spade held its own against weight and gravity, and I managed to perform my mornings latrine duties intact, and more importantly, not covered in my own shit.
I went back and we finished packing our gear. Lifted packs.

Once more said a thank you prayer to the now deity who is named Alistair Pooler,
and headed acropss the river to start our journey to Melgarve and then Laggan

We headed off, skirting the very boggy ground (it can be done), over the stile and then off onto the track over to Melgarve.

AND HERE IS THE REALLY BIG THING.

There are some rather fine views along here, and most of the way, the track is quite good, becoming a bit indistinct and boggy as you get towards Shesgnan.

As we approached Shesgnan, we were hit by a heavy downpour.
This was to be a pattern for the day.
Shesgnan is a fine estate bothy, now fully refurbished.
You cannot get inside, which is a shame, but there was a good seat outside to sit and have a snack. Phil found an old golf club ( I seem to remember it was a 6 iron) to practice his swing, which would need practice.

We put it back were we found it.
Not sure why there would be a golf club here.
Anyway, by the time we were here, the rain had passed.
We had a rest stop and then headed off again. I had removed waterproofs by now, as the weather was looking quite good for a while, although a bit blustery. 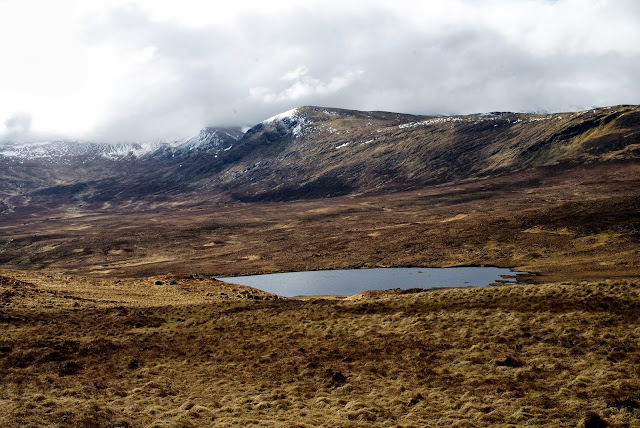 Panorama Video on way to Melgarve

Just as we arrived at Melgarve, after crossing the bridge, and in sight of the bothy it started to chuck it down.
I stopped to put on a waterproof. Al and Phil crashed on to the bothy.
I arrived soon after, and we set up stoves and had soup and stuff for lunch.

As I arrived an old chap outside (probably not that old), was pondering on where to set off to.
He had been told that the weather was going to close in during the afternoon.
As it happens it did for a while.

From Melgarve you can see the huge amount of carnage and destruction caused by the massive Beauly Deny power line access road that has been cut through the countryside to allow for the eventual building of the monster pylons.

It is another ugly scar across Scotland, but it is all too late for that now.

We had lunch and Phil attempted to light the fire.
It worked to a fashion. I made soup out of a Mountain House meal.
It is better as soup than a meal. Just my opinion.

Although based upon the number of Mountain House meals in Bothy's, either many agree, or there are a lot of people that take too much food.

So as we left Melgarve, the weather had cleared a bit.
We made our way down to the road and the rather LONG road walk over to Laggan.

As you walked along the road, you can neverendingly (not a real word) you could see the scar of the access road to your left.

The rain came in again in random waves, and waterproofs had to be donned.

Al had briefly fallen behind Phil and I as we trudged along the road but he caught up as I stopped for a foot and shoe and sock road faff.

Not much to say.

It was road walking.

We carried on I had come this way a couple of years back when I was with John Jocys and Alistair.

It was the same fucking road!

We carried on at Garva Bridge we came across a fine gentleman.
He was buy his 4x4 and had a small stove going.
He was fishing, but knew of the Challenge and offered us a wee dram.

Only a very rude or insanely teetotal person could have refused.
As we were neither, we took up the kind offer IMMEDIATELY.

It was here that we met John. I forget his surname, but he knew JJ (John Jocys to you)

We ended up walking together all the way to the Monarch Hotel in Laggan.

t is a bit of a hike along the road.

We soldiered on,eventually coming to the wee loch before Sherrabeg. 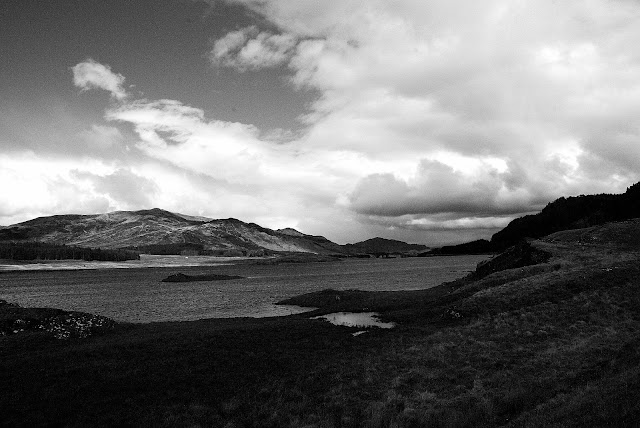 I think this was a Wade bridge. It certainly looked like it. 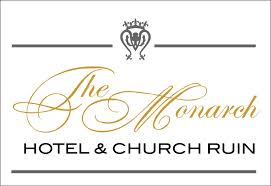 We were met at the door by Annie, who runs it with Neil.

Annie and Neil are both from Australia.

I will not fill in any more details about them.
But if you want to find out more, I can recommend that you pay them a visit, because they have really put in an effort to improve the Monarch (was Monadhliath hotel.).

Annie showed us in to our rooms, and once settled in (which took no time at all), we made our way back to the bar.

John had joined us although he was later to go off to the bunkhouse before coming back in the evening for a meal.

They are a delightful couple.
Professional and yet down to earth, and very friendly.


This contained the fine cheesy comestibles that we would be dining on the next night at the Cheese and Wine party up the Minnigaig.

BUT.. you will have to wait for that, However, it did not stop there.

Humphrey had also left for us, a £25 Monarch voucher.

How bloody fantastic is that.

What a fine gentleman.

It took Phil no time at all to spend that on liquid refreshment.

We had a beer and then went back to our rooms to unpack additional parcels, have a shower.
Do some washing and generally chill out. I was sharing a room with Al, and Phil had decided that he would have a single room so that he would NOT annoy us with his dreadful snoring.

What a kind chap..

This is of course NOT the reason that Phil gave :-)

Cleaned, suited and booted we returned to the bar (someone has to), and met up with Phil and John and Mr Knipe who had sloped in, along with Norman, who still had maps left to litter Scotland with.

There were others too, but you need to read Al's blog to find out who.

We spent the rest of the evening in fine company, and consumed beer and wine and cider, and all manner of dreadful things.

We also had a very excellent meal.

And so this carried on until it was eventually time to go back to our rooms and get some well deserved sleep.

I mean we needed to take it easy, because tomorrow was going to be another bloody long day

AND... Tomorrow was the second CHEESE & WINE party.

IT'S A BLOODY TOUGH LIFE ON THE CHALLENGE YOU KNOW!