A leisurely stroll which is always a lot further than you think.


No Music today, BUT there is a VIDEO later on 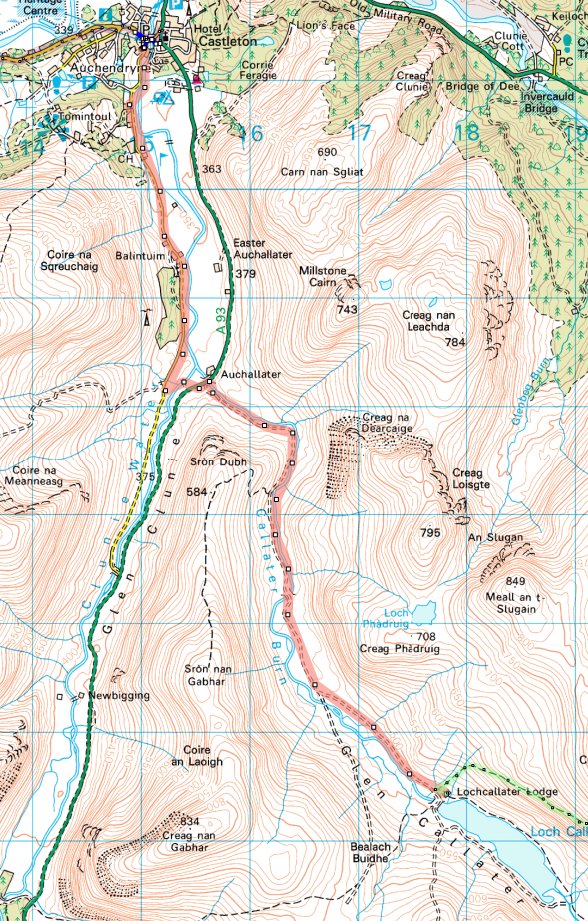 The problem with days when you don't really do much, is that they are hard to remember.

AND.. we didn't really do much today.
Well, the day started with the need to get up.
As it happens we all needed to be out of the Cabin by 10.00am

So at some point I got up.
Had some coffee.
Packed away stuff and gear and stuff.
Put on clean-ish stuff
Looked out the window

We cleaned the cabin as best we could
Thanked our wonderful hosts
AND.. wandered down the road to the Old Bakery for breakfast.

Al headed off to the Old Bakery

1. Find out if Dennis was ok.
2. Find out IF he really should have stayed there
3. Make peace (if necessary) with Kate (It wasn't)
4. Collect my parcel

As it happens, Dennis was there

He was fine (apart from hanging out of the window in his shreddies)
And he was meant to be there.

Kate was brilliant.
She really is lovely
Someone did turn up.
I apologised profusely
Offered to pay
She declined and said it was fine

I collected my parcel

I have only just remembered that bit.

AND THEN I headed to the Cafe

AT Least I think that was the sequence of events.

I did NOT have the Challenge Special but for many it is essential.
And as such Al had that.

BUT PHIL had blagged a room in the FIFE
I say that.

He had pre-booked the room way back.

So Phil had his breakfast served to him, and as such did not need to attend the Old Bakery at this point
Breakfast in the Old Bakery can become an extended thing.

After breakfast we went to the shop to get stuff to take to Callater.
Then we wandered up to the Fife (which was shut)

I got out my pen and odd sheets of paper, and continued to pen The Callater Poem for the evening.
I had started it in the Old Bakery
I continued to do this whilst socialising until we went inside, where I had Shandy, and finished it off ready for that night.
It was a bit scrappy, but as long as I didn't lose it, it would do.

The weather outside was getting sunnier and sunnier.
As the day progressed, I was getting itchy feet to head on down.

We met big Mick outside, and I asked if there was a chance of a room at Callater.
He said he would see what he could do.

We stayed a while longer.
I wandered outside, not wishing to beer the day away.
Anyway, for once the weather was fabulous.

Eventually, Al and I cracked and headed off.
We trudged slowly in the now VERY HOT afternoon, down towards the Golf Course.

Dennis was back in the bar.

At the start of the road we popped across into the Church.
Like Al, I had often walked past.
We were in no hurry so popped in. 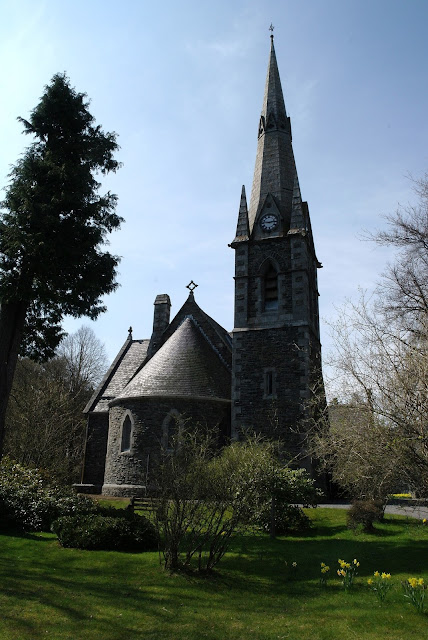 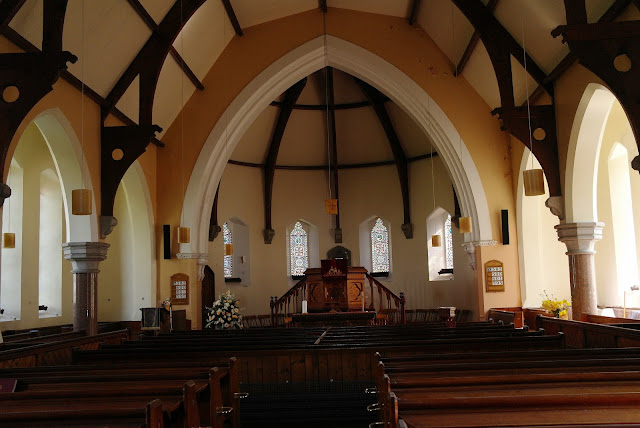 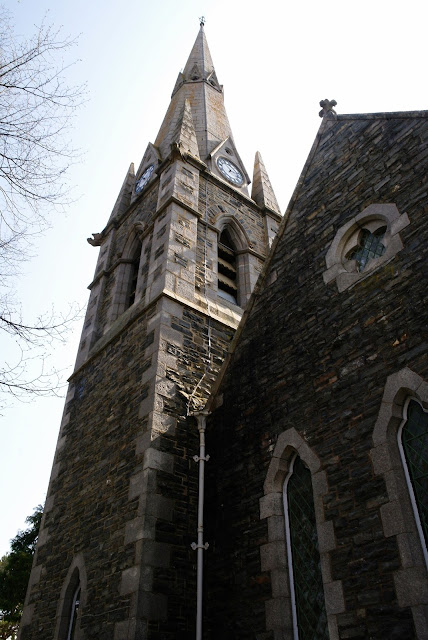 We headed off along the road.
It was now HOT

A bit past the golf course we stopped.
I took of another layer to get down to just a very thin T shirt.

This was good from the heat point of view until you had to pick up the rucksack.
I was now carrying pretty much everything.

We slowly and I mean slowly made our way down to the small bridge that crosses to go up the track to Callater.

Al wanted a sit down, and Phil was on his way, so we waited, and I adjusted micropore strapping on toes, that although not blistered in any way, for some reason today, were really bitching.

I was being typically impatient, and in the end headed off to Callater
It is quite a bit further than you think, and although I knew the way well, and the scenery was superb, I found myself yomping.
I caught and passed several people (NON TGOC) out for the day or just a walk.
None had BIG packs.

I carried on, and on.

As I got nearer Callater, I found myself guessing and then counting the number of paces it would take me to get there.

And then I had arrived.

I was at STAN and BILLS

A few TGO folk were putting up tents and stuff.
I dropped my pack by the door and went in.

Had a brief chat.
Mick said I was out of luck with the room, but AL had one.

I wandered outside to look for a pitch.

Bill was showing someone the Bothy.

I greeted Bill as ever, and asked him if there was room in the Bothy.

"Well, that would be favourite Bill" says I

(Apologies for the Accent Bill :-))

And I followed Bill a wonderful chap, as was Stan, and he set me up in the back room.
The only proviso being that I would need to look after Dennis when he arrived, and make sure he eventually got to his room.

"Not a problem Bill, brilliant thank you"

And I went outside to get my stuff

As it turns out, that job was easier than I expected.

And so gear and room sorted, I went to the kitchen to socialise, and have tea, before the serious stuff began.
It would at that stage been rude not to also have a bacon butty.
Wouldn't it?

And so the day wore on, with loads of old friends turning up, and new ones arriving.

The afternoon gradually became the evening

As the sun began to drop down I headed off outside to take a few photos of the Loch, because it is such a beautiful place, and reflects the inner beauty of the people who every year run it and provide us with such a fabulous venue.
I know we get asked to use a different route and not go there sometimes.
BUT
I mean
I have been there.
Why would I not go back?


I headed back in for the evening festivities.
There would as always be songs and recitals.
We would miss Ian and Jim & JJ
But Gerry and Mick were there in fine song
We sung and recited into the night.

Much whisky flowed
And at some point Bill bought out the Cheese that they had got to go with the port that Al and I had bought.

I was still not sure if I would be doing the poem, but AL introduced it, and it would have been wrong NOT to recite it now.

In fact I ended up doing it twice that night by popular request.
All very flattering really.

So, here it is on video (well almost)
Plus the transcript underneath

This is a video I did of it (on request) afterwards at home.

Please NOTE... This does contain swearing, so if you are going to be offended by that I would suggest you neither watch it nor read it. On the other hand, if you have read this far it is unlikely that anything in the poem will make the blindest bit of difference

I went to see my analyst About a month ago
He said…”There’s NOTHING I can do for you
You’re gonna have to go.”
“There’s a train that goes from Euston
It’ll take you to Hell and Back.”
“Oh, and by the way, just so you know,
You’ll be carrying a FUCKING GREAT RUCKSACK!”
It had all begun the year before
In September of   2  0   1   2
When a call from Lambert had been taken
“Ah..  There’s a place on a trip for you!”
“I promise great views and Wall to Wall Sun,
And velvet like grass” he cries
“Sounds Brilliant Phil, I’d LOVE to come J”
Not knowing it was ALL BLOODY LIES.

So, we set off across BOGLAND
As the Wind and Rain drove in
“It’s ALL Phil’s Fault”, the group all cried
We’ll NOT go with him again.
Our feet were webbed, our clothing soaked through
There was NOTHING we could do
But wade yet another river
And empty out Boots and Shoes

It was Wednesday and the Skies were clear
We set off UP without a care
Upon the Tops were stunning views
Oh yeah, and   H Y P O T H E R M I A
No fear, let’s bag another Top
You can see it just over there
Just need to drop down into Bogs and Hags
And 3 foot high fucking heather.


“Hang On! There’s a lovely river just down there
We could drop down and have a gander!”
Then walk along for Miles and Miles and Miles and Miles ………..
Of Never Ending Fucking MEANDER
We arrived at the Geldie and  set up our tents
Though just hours,    like days it had seemed
We had a snifter or two, then put our heads down
And in our tents we DREAMED ……….  and dreamed and dreamed…OF HEAT!

And so we come to ‘Cheese and Wine’
And all things that make life fuller
Thanks in main though NOT to us
But that wonderful Mr Pooler
It was a plan, a cunning plan
That would have been just fine
Except WE had two missing parts
The CHEESE, and Yes ……….  The WINE.

And so to Braemar, in we trudged
The rain it was firmly set
That nasty shitty Scottish Rain
Whose sole motive is to get you WET
We slithered and dripped into the Fife Arms
It was full of our friends in strife
It would have been rude not to stop for a beer
Suddenly ALL was Good in Life

A Cabin was offered for a nominal fee
An offer we couldn’t refuse
We dried out our kit, and then set off back
For an evening of chatter and BOOZE
And.. at the end of the day, we took Denis away
He was as we say ‘quite well watered’
We left him at Kates, we hoped that was right
See for Denis    Watered means  ……  Slaughtered


It was CALLATER TIME
It’s a favourite of mine, an evening at Stan and Bills
Where a small group of reprobates, arrive in a queue
For an evening of friendship and thrills
The evening long, the whisky flows free
And Mick sings us into the night
For us all it’s a joy, mind you, we’ve all had a few
For normal folk, it would be a bit of a fright.

And now off to the coast, although NOT happened yet
ALL TOO SOON, it will be over and done
The horrors of wind, rain and bog all f o r g o t t e n now
And the photos will show ONLY THE SUN
The Challenge is over, The Blogs will be written
From our fingers Tales of daring will fall
And in September ……..  we’ll ALL apply yet again
INSANE BUGGERS, One and ALL………

It was another cracker of an evening at STAN & BILLS.

So many thanks to all who came, and entertained, or just attended.

Dennis never did turn up

AND HUGE THANKS AGAIN TO BILL,
AND EVERYONE WHO MAKES THIS SUCH A BRILLIANT NIGHT EVERY YEAR.

See you next year (even if I don't get on)