A day in which we MEANDERED about quite a lot (again)


Riverside - We Got Used To Us

See how I used the band name as part of the day?      ...........    :-)
We were up reasonably early today.
Mainly because people where up and about. I had been up earlier at about 5.00am, not being able to cope in the tent anymore, I had to go for a pee. It had been pretty cold last night, and any earlier than that I didn't fancy the journey Val and Dave had not returned so we all hoped they got back OK.
As it happens, we learnt a lot later, that they had got slightly off track heading down to the dam, and had finally got back there very late, and not got home until after 2.30.

We had a long day ahead of us.
Intending to go up and do the ridge line all the way across.
A plan that did NOT happen as it turns out.

So after saying goodbye we finally headed off. Les and Issy had started a bit ahead of us. But in no time at all they had vanished into the distance. At first the track was quite wet and boggy, but as we rose, it became easier going. I say easier, it was UP. By the time that we were about half way up, I had begun to pull away from Al and Phil. Not a problem, this often happened, and in all honesty it is nice sometimes just to wander along in the silence and in your own thoughts.
I stopped for a bit of a shoe and micropore faf, and also to let the others catch up.
Les and Issy were long gone by now.
After a brief rest we headed on, turning left to head up to the first top.
A brief up, we were suddenly on wonderful soft and fluffy heather and grass. It was flattening out, and the walking was easy, and the views excellent.
Bit of a shame about the wind though, because it was pretty blustery on the top.

From the first top, we made our way down and across, to avoid the slightly boggy ground. We could glimpse Les and Issy as they headed off to follow the boundary line and bag bigger hills.
We made our way across to the top of the Corbett, with magnificent views, but pretty cold and strong winds. 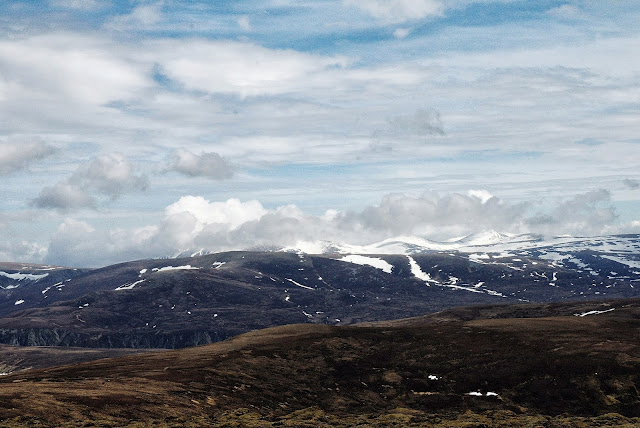 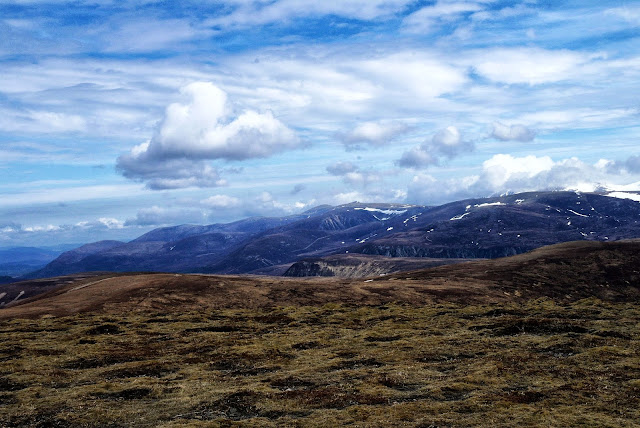 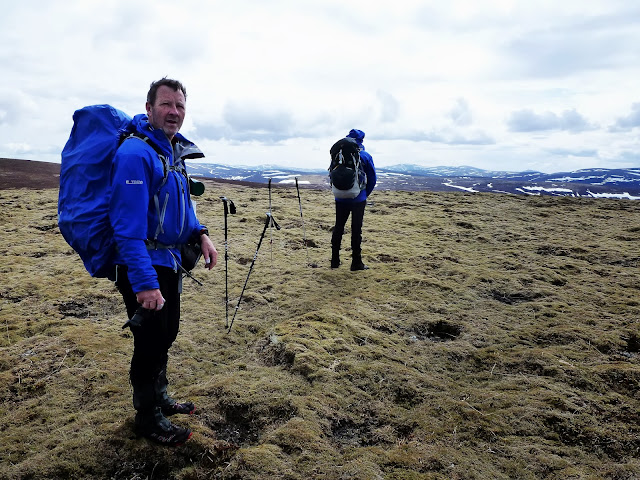 There was a wonderful panoramic view from the top of the Corbett.
To get a better idea, you can view the .wmv video below.
It will also give you a better idea of the wind.
You might want to turn off Riverside first though.
Although, the Riverside track is pretty damned mighty.


From the second top, we had to head back round and down. This meant losing quite a lot of height. It also meant plunging down through hags and bog, and then climbing back up again. This was much bigger rufty tufty heather and hags. Hard work going down, and also going back up to the next top. We also encountered snow lying in the more sheltered faces. Not as much as we would after Callater, but still snow. The snow was easy to cross, but when you reached the edges, you had to be careful that you didn't suddenly drop through the crusty surface into the nothing gap that was underneath where it had melted.

After discussion of Peat Hags and descents and ascents and general stuff, it was decided that instead of fighting our way through lots more hags and bog, that we would drop down towards the upper reaches of the Feshie, and then follow the river out, where it would be less wet?????
Well, we shall come back to that shortly.
We dropped down into a sheltered spot amongst the hags, and had a well deserved lunch. All too soon it was time to stand up into the wind and work our way down. Then we followed the river down, changing sides as was necessary, to avoid the large areas of snow melt.

It took quite a while in the descent, but eventually we arrived at the Feshie. A rather fine example of

But it was very beautiful, apart from the above. Now, at this point I must discuss Fractal Maths" If you have ever looked into any of this stuff, you will eventually encounter the issue of the INFINITE coast line. Because with these fractal curves, the more you zoom in, the more complex they get.

AND, if you fancy reading more have a look at THIS The off shoot of this is that Coastlines are INFINITE in length.
Well let me tell you, that after walking along that river, they are pretty right, because at times it felt bloody infinite.
We had a rest stop after we got to the bottom, by the side of the river

We carried on along the river and it's never ending meandering.
There is NO path, but for most of the way, you can follow the river.
Having said that, there are times when it is easier to cut across the meanders, and others when you have to gain some higher ground just to get past the steep sides.

Hey it is pretty cool. Just go there and see.

Highlight of the day!

Sadly NO PICTURE, but as Al and I stood by the edge of the Feshie,

AL suddenly shouted out "OTA!"
"I don;t think it is any hotter Al"
"OTTER! DOWN THERE IN THE WATER"
"WOWSER"
There is was huge and dark and mottled and swimming just under the surface.
This far up the Feshie.
A big old boy it was too Bloody wonderfully magnificent.
I like Al had never ever seen one in the wild, and there it was.
And then it was GONE!
Now that may have been because it saw Phil?
We will never know.
And Phil never saw it.

And if for nothing else, that day would have been worth it all, for those few brief seconds. Even without the views and with BIG BROAD GRINS, we set off to follow another bleeding meander, but it was OK, and to be honest ON and ON we went. Up and down and round and round and in and out We zigged, we zagged and we gradually headed  ...............

As we neared the turn, I had gone off again. I looked back no sign. I slowed up Phil came into view I waited
"Al's a bit knackered and is having a rest"
"OK, I am going to go on to the bend ad then have a rest on those rocks"

We wandered to the bend I went down to the river and Phil went to go over.
What with it being a bit of an awkward move.
"It's a bit of a BOLD MOVE" says I "But as long as this grip holds I should be OK"

Phil was not going to watch. He went over the top. Probably so he wouldn't have to see me break my neck as I fell down. I grabbed the hold the other side. Pivoted round the corner, as my rucksack attempted to drag me off backwards and down 10' into the river.

My grip held. I stepped round. I scrambled along a bit. I made it to the rocks I lay down I had a rest And I waited for AL.

After a while AL, apparently rejuvenated, flew past and headed off.
A slowly gathered my kit and started to follow.
Al and Phil were long gone by then. I headed up to the point where the Feshie turns back, and headed over heathery and boggy ground in pursuit as we cut across to pick up the Geldie.
Eventually I caught up with Phil, and then headed off after AL. He was a man on a mission, and it took some doing to catch up. By the time I caught AL, we had picked up the path along the Geldie. Now, PHIL had vanished in the distance. I think AL just wanted to get somewhere and put up the tents, because he was like a man possessed. We continued to stride along.
"I reckon Phil is about half a mile behind us" I said.
Eventually we stopped. It was still very windy, and we were NOT sure what the weather was going to bring. We carried on after Phil caught us up The path is pretty easy going along this stretch. A bit short of where the Geldie Lodge ruins we decided that if we could find a nice flat bit, with a bit of shelter we would set up tents. Most of the ground looks quite good as you look down to the river, but it is finding a good dry bit. Eventually we settled on a small patch of straw like grass sheltered by a small rise. There was enough water in small streams nearby. Al and Phil pitched on one side, and I used the other, since the Trailstar has quite a large footprint.

It was getting pretty windy and cold now. And to be honest we were all a tad tired.
NOT a night for parties. I popped over to Al's tent and gave him a SLUG of the remaining SLOE GIN.
Memory is vague. I think I may have gone to Phil's as well, but I cannot remember if he was still awake or not.

I settled into my tent, and boiled some water for another one of the extremely fine
Adventure Meals from Outdoors Grub.

Popped outside for a pee, and also to capture a shot of the Sun dropping down behind us.

The weather was holding off, but the forecast was not great for tomorrow, and back in the distance where we had been, it was looking less that friendly now.

It was time for a wee dram and then sleep.
We planned a reasonably early start the next day. I cannot now remember if we said 7.30 or 8.00?
It is a surprisingly long trip into Braemar from here, although the going is easy, and we wanted to get before the shops shut

AND thus, we ended a rather splendid day in which we circumnavigated the Feshie and dreamt of Braemar and Beer.