That is your opinion.

So today, what with the weather being slightly drier, I got on my bike and headed off through copious huge muddy puddles to wonder at the joy of our new Wadlow Wind Farm.

FARM??
What a load of bollocks.
How in the name of all that is Holy, can you call them a farm.
OK, they are sited at Wadlow Farm, but a wind farm?

Ooh yes farm it gives them that lovely green huggy warmy feel.
"Cos they are savin' the planet init!"


Forkers?
Is that spelt right?

And you can read all the Hype about it HERE

Anyway, here they are close up.
Well, as close up as you are allowed to go, what with all the danger, and keep out signs and only authorised personnel allowed and tons of other health and safety bureaucratic shite.

So, what does this wonderful development look like from close by. 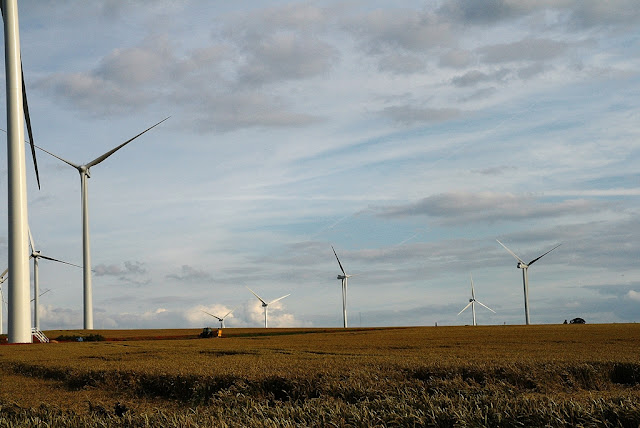 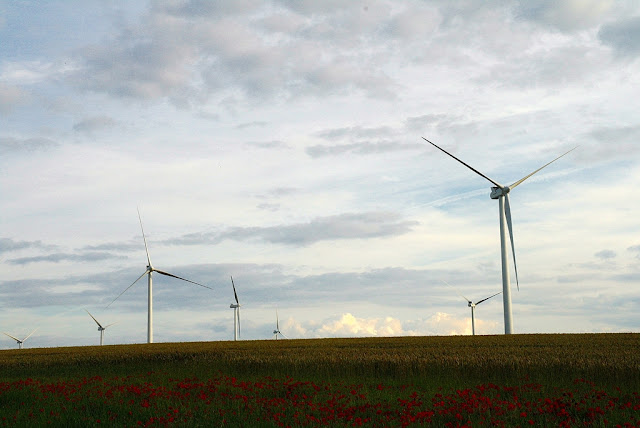 And we only have 13 of them, NOT the 53 (it might be 33), of the really big ones, planned for the Balmacaan Forest in Scotland.


But we are slowly being overrun by metal monsters.


I did have a nice bike ride though, despite the views


Once upon a time, several months ago, when dog and I went for one of our usual strolls along Quy Water, all you could see was flatness, and East Anglian horizons.

OK, you can still see lots of sky, but now the progress??? on the Wind Turbine Monster
(it has bugger all to do with farming), has now marred the view.

These are not even close, these are several miles away, but now that there are 12 out of the 13 of the damned things up, you can finally see the magnitude of these subsidised monsters.
I lied, there are 13 of the buggers, one was hiding behind another one.
.
Guess which day I spotted them?

So, today dog and I went along Fleam Dyke (again), over the M11, to have a close look.


There will be some daft bugger likes them.
I DON'T

I suspect that the locals who thought it was OK, or just did nothing.
There is a loot of apathy with these things, might just be thinking.

"I didn't think they there that big".


When in reality, they didn't think at all.


And these are not the big ones.

In fact, down here, there is hardly any chance of a hill in the way either.

Sooner or later, the govt will figure out what a monument folly of poor science these things are.
And by then it will all be far far too late.

So, there you go, next generation, look what we did for you.

Rain by Nora Jones Yes, I have used it before but by Patti Griffin
by Andrew W @ 22:22 3 comments:

I am going to write this in a strangely convoluted manner.

Well, let me whinge about it.

There I was needing to go to Brampton in Cumbria on business.
I had managed to get a mega cheap rail ticket (£39.50) both ways.
I am now assuming that this was because I had to travel in a carriage opposite some bugger with a big nose and a cold.

At the time of course I was not to know that because these germ things take a time to incubate inside you.

So all went well, and I eventually arrived at Brampton.

OK, British rail as it is, I nearly missed a vital connection at Newcastle, because some bloke "wot didn't do 'is job proper", buggered up some equipment, that changed stuff and we ended up being behind a rather slow moving freight train at a very reduced speed.

As luck would have it, we arrived in Newcastle with 4 min to spare rather than the intended 40, and so I did arrive on time, where Neil, who I would be working with for the week, met me.
A damned fine chap is Neil, and not only did he transport me to Walton where I was staying in the bunkhouse, but also loaned me a bike for the week, and picked me up every morning, and took me back every night, come rain, hail or shine.

So, mainly rain then!

I was feeling damned good, and went for a rather fine run once I had got myself sorted out, from Walton to Walby and back

As I was saying, I was feeling good, but would not last thanks to that ***t on the train.
OK, he is probably a nice bloke but he was on MY train, and had a cold, and probably gave it to me, so nice bloke or not, he is a $**t

The weather for the run was good (despite the flies, and the rather wet ground underfoot )
Indeed, this is a rather nice little walk/run along green lanes that do not sport bikes, 4x4's or motor bikes.

I set off down the rather wet sheep field to the river.
Here there is a little waterfall at the bottom just after passing through the bottom gate 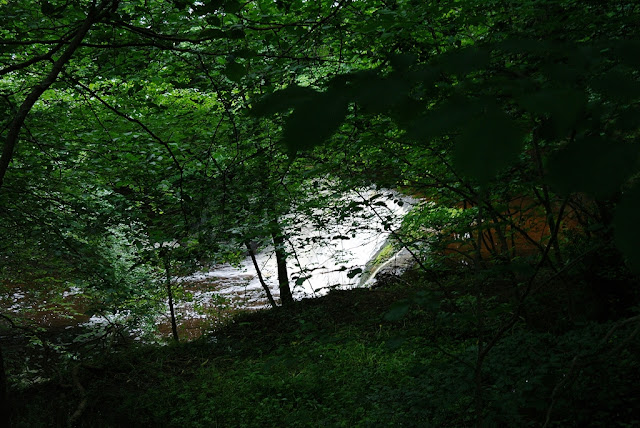 I also took this rather dreadful video of it.


After the river, there are several paths through fields until eventually we arrive at a set of steps that climb up, past a house where there was this fine fellow 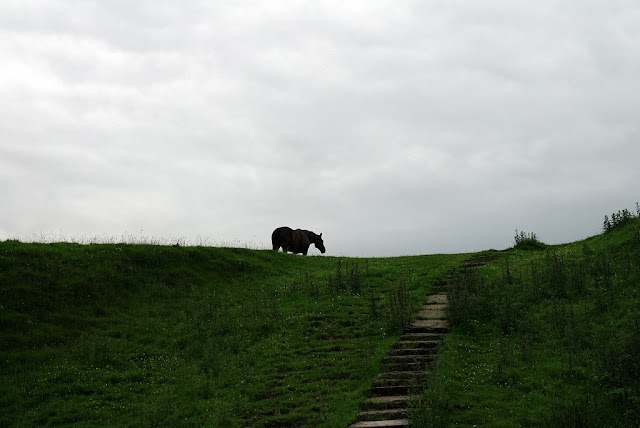 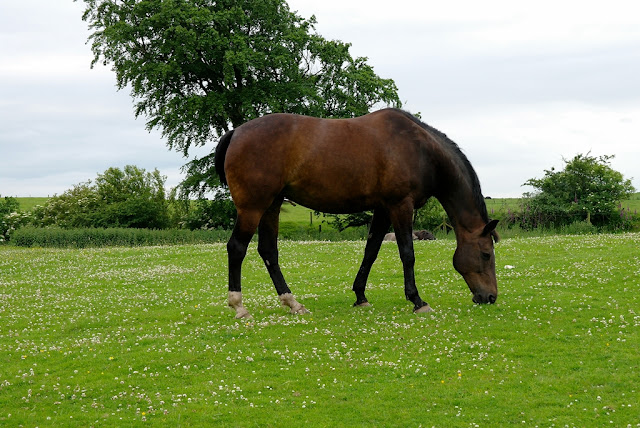 I carried on for a while.

A damned long while in fact, until I decided that going back might be a good idea, what with pending rain, and darkness and stuff


Indeed, it was fine evenings run.

Later back at the bunkhouse, I was the only one staying tonight, so I poured myself a glass of wine or three, and settled down for the night.
I would need to be up early tomorrow, to go and do 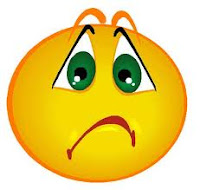 I know, it had all been going so well until then


So, what happened tomorrow.

Oh yes, I did that work thing.
Got back about 7.00 and discovered that I had company.
We had a chat.
Nice bloke, he was studying to be a vet.

I decided that I ought to pop out on Neil's bike, since he had loaned it to me, it would have been rude not to.
It looked like rain, but I fancied a ride, and anyway I needed to get to Brampton to the Coop for some stuff.

That being the case, I headed off on the bike in the completely opposite direction. 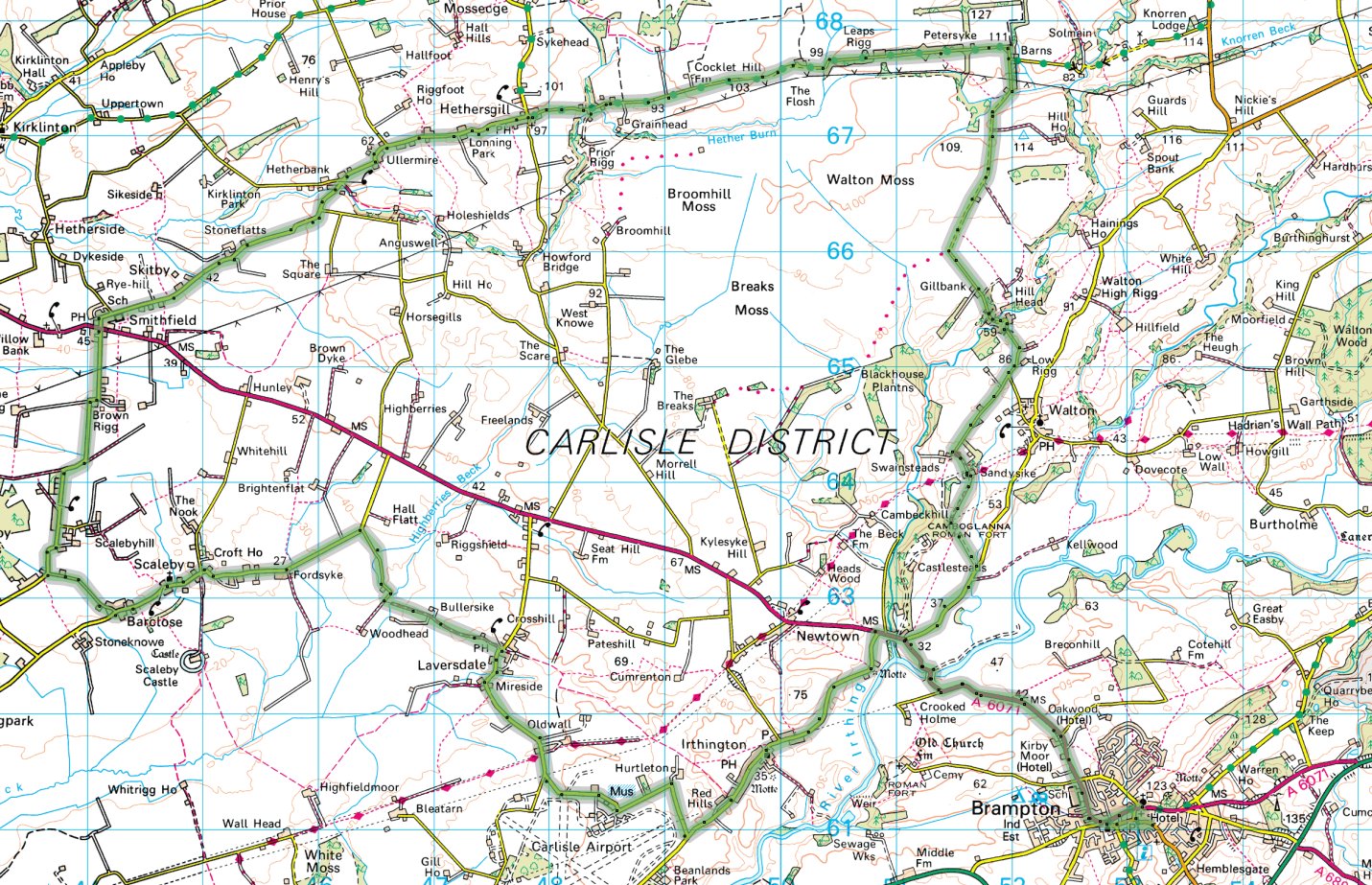 No photos of this bit, so I will NOT bore you with the saga.
I did go into Brampton though.
Interesting place full as far as I could see of youth's with very little to do.

So I got my stuff and headed back.

It was a Biblical deluge and so I arrived back moist, and muddy.

By now, there were a few campers outside cooking under the tree.
That had at least been their cunning plan.
Cunning without rain, but with rain foolhardy.

It was that sort of rain.

We had a bloody fine evening of chat and banter and beer and stuff like that,
and then at about 11.30 we all went off to wash and bed (separate bunks), and to snore.
Not me of course

I say work, but Neil is a great bloke, and working there is a lot of fun, and although we did a lot of stuff, it was a pleasure.

So, anyway, when I got back there were new different people in the bunkhouse.
They were also doing Hadrian's wall.
One chap had his dog Betty with him.
She was a brown lab, and extraordinarily well behaved, especially for a brown Lab.

DID I MENTION MY COLD?

It was developing quite nicely now, into a nasty sneezy sniffle.
Just like that bastard on the train had.
I kept the sneezing to my tissues, and kept well away from people as much as I could.
I had an awful feeling that it was going to become a nasty cough.
I also though that maybe a long long run, and tonight a long, long bike ride might not have been the best idea.

I decided it was time for another bike ride
I mean KILL or CURE.

Remember last time I tried exercise as a cure.

I said  I NEVER LEARN! 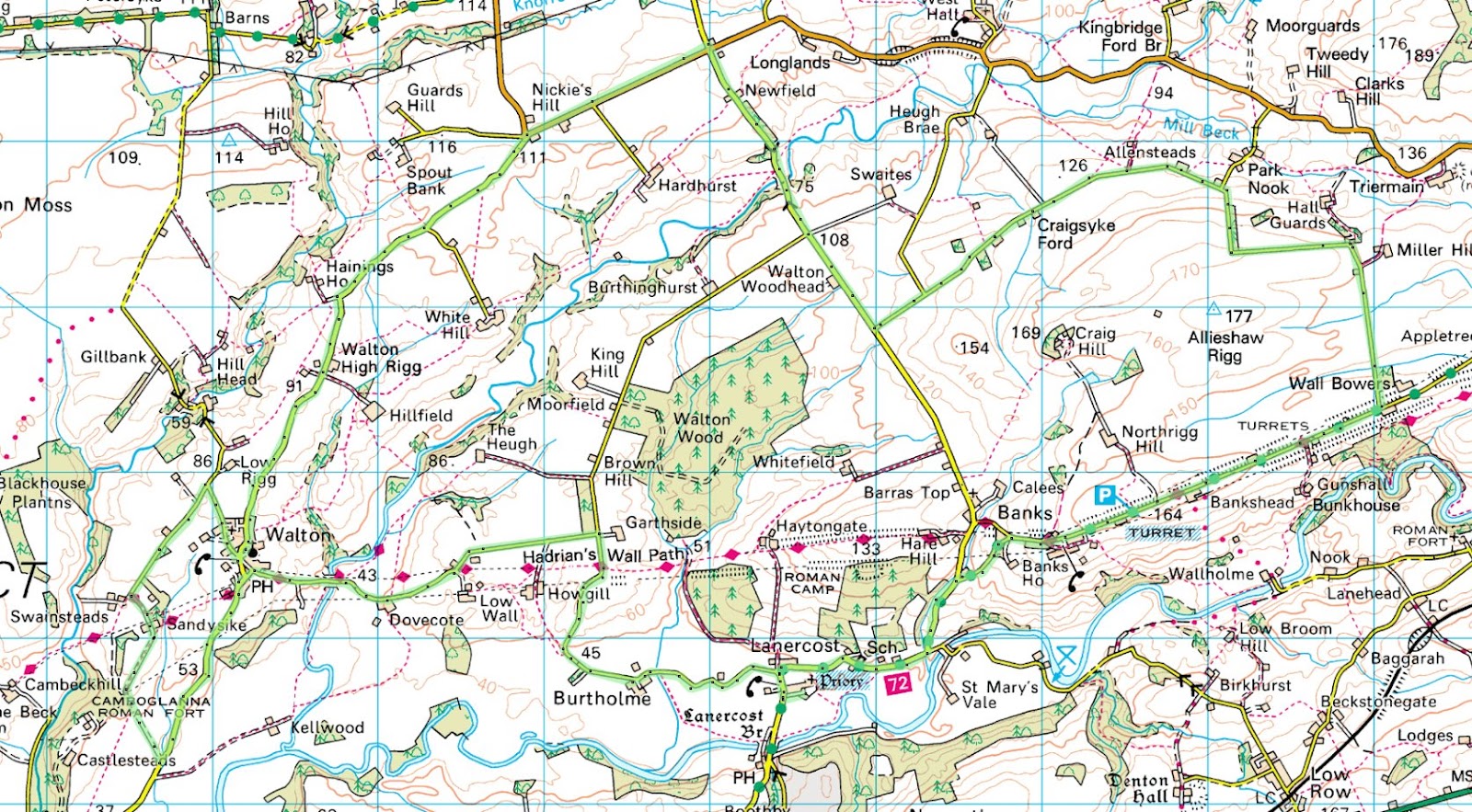 This one was scenic.
I did not need to go via Brampton to buy alcohol.
It looked a bit like rain, but I did not even bother with a waterproof

I decided I would go via Lanacost Priory and also see if there was any cricket on.

So, no maps again I went off via a route that went by the theory, that if you keep turning left most of the time you will arrive back at your start point.


More beer and wine ensued, mainly by me, and then eventually, it was time for sleep.
Or in my case, finish up the work, which I did very quietly in my bunk using a small laptop.

I took pills and slept badly

Next day I got up and went off to WORK!

So by now my cold is getting worse.
I have become the man on the train.


I am sneezy and not yet wheezy.
Neils wife Kim has not been here all week.
She was ill all week and before I arrived.
Can a human get a virus from using someones computer?

Anyway, we get the work done, well almost and then it is time to go back home on the 16.46 from Brampton.

Neil drops me off.
All is good, train on time
Excellent

Arrives at Newcastle only 2 min late where

Trains in chaos on the East Coast caused by weather.
I mean we never have Fucking weather, so it must have come as a shock.

We are delayed by (quite a while).

Eventually departing just after 18.00, which means all my connections are buggered.
The carriage is very crowded.
All reserved seats have been cancelled due to cancellations of trains.
I fight my way to a seat.

Yes, I know she was someones Grandmother, but I was bigger, so I got a seat.

The air conditioning was buggered, so we spent a long time on the way to Stevenage, overcrowded, hot, no drinks, and late.
Oh yes and we had to wait at Doncaster for 20 min due to no room on platform.
And then we had to go slow because of shit happening.

Some sort of sunspot, and unseasonal bollocks.

OK, so the long shot is, that I eventually get home about midnight.
Late, Hot, Bothered and feeling like Shit.
Cold is worse.
Still got stuff to finish

So I spent most of the weekend in bed, feeling ill.
Cried off work on Monday (well worked at home).
Went to Dr to see if I had really managed to get another chest infection.

Got some pills, but decided not to take them after all.

And that is it really.

But to myself, not travelling with some Typhoid ridden Pinocchio.

And Olly had his leavers prom and went with Grace.
And they do look a stunning couple.

Next week, Olly is off to Canada on Rugby Tour for 2 weeks.
So, the fact that he has just gone to the Physio with a slight groin strain, is

And to finish on a down note... It is a groin strain, and it may or may not stop
him playing on tour, which is a bugger
and he is quite upset, but showing it as just being plain angry, as you do at 17.

So everything is just fine. NOT!

Just as well the rest of the world is in perfect harmony then :)


Enough of my life!


Craig Erickson - No Reply
(Seemed like an appropriate track)