So, all we had to do now then was to get to Braemar and we were home!

There may be the odd mistake in this OK.
Maybe a location, or a name!
If there is let me know, and I will sort it.
I have my glasses back now, so really I have NO EXCUSE other than failing memory and old age.

Day 08 - Kincraig to the Geldie via Glen Feshie 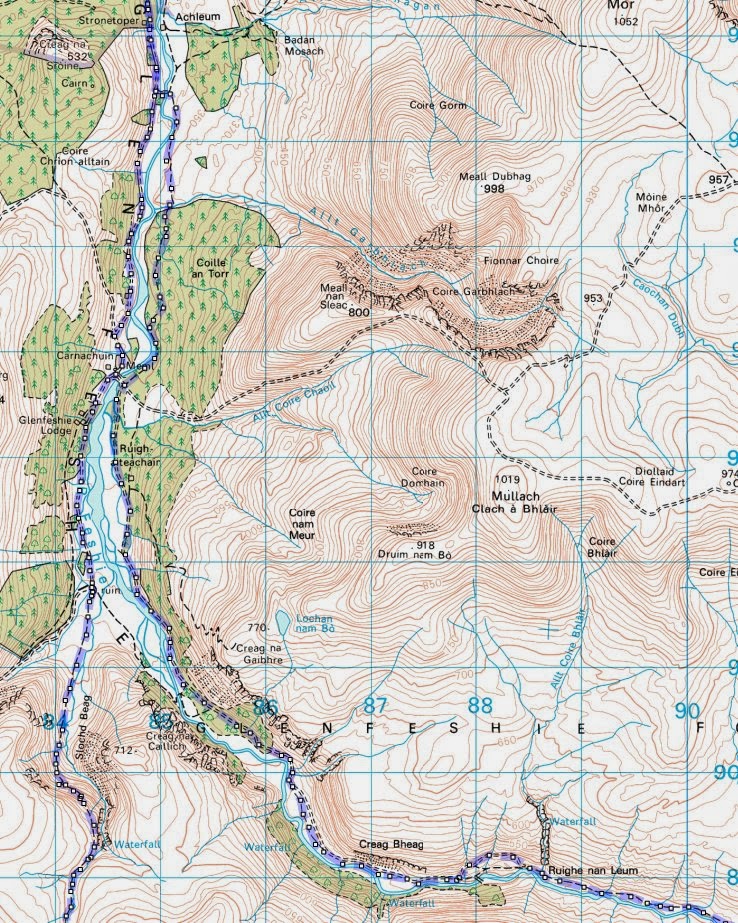 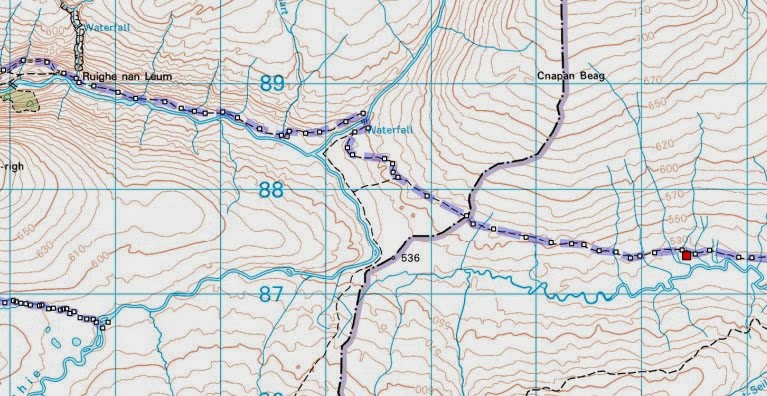 Now, since we were in Braemar, and since AL had a HURTY BLEEDIN' KNEE, we were NOT going, meaning Al was NOT GOING to do the hilly route.

SO, it was a bloody long walk down to the Feshie.
This having been said, it was a rather lovely day, and the Feshie is quite beautiful, and anyway, why lag a bloody great pack over a bloody great hill, just to tick off something on a list.

For years I thought it was MUNRO BRAGGING!


Now, it was at this point, and about errrm  5 miles from Kincraig, that Phil, remember day -1, felt in his pocket to discover his wallet was missing.

Found it in the pocket that he normally carries it in.

And thus it was with sadness at having to move, that we departed from Val and Dave's and made our way down the road and off into the Inshriach Forest to head down to Glen Feshie.

On a plus note, the weather was pretty damned good.


There is quite a lot of road at the start of this day.
We thought that by the time we got to Auchlean, where the Kingussie track joins in, that we might see some others, but NO.

So, we carried along the road until just after the buildings that have been refurbished at Stronetopper, where it was decided that a sit down and a rest was in order. Maybe a drink and a breakfast bar, and rest the feet from the tarmac pounding.


It was time to move on, just a bit own the road to cross the footbridge over to the left bank, which is the East bank, to follow the new rather fine track down to the bothy

The track winds through the woods, and along the way we encountered some new man made bridges. Later in conversation, we found out that they had all been done by the man at the bothy, whose name I ought to remember, because the daft health and safety rules that apply to the estate mean that it is not economically viable fore the estates to make them. 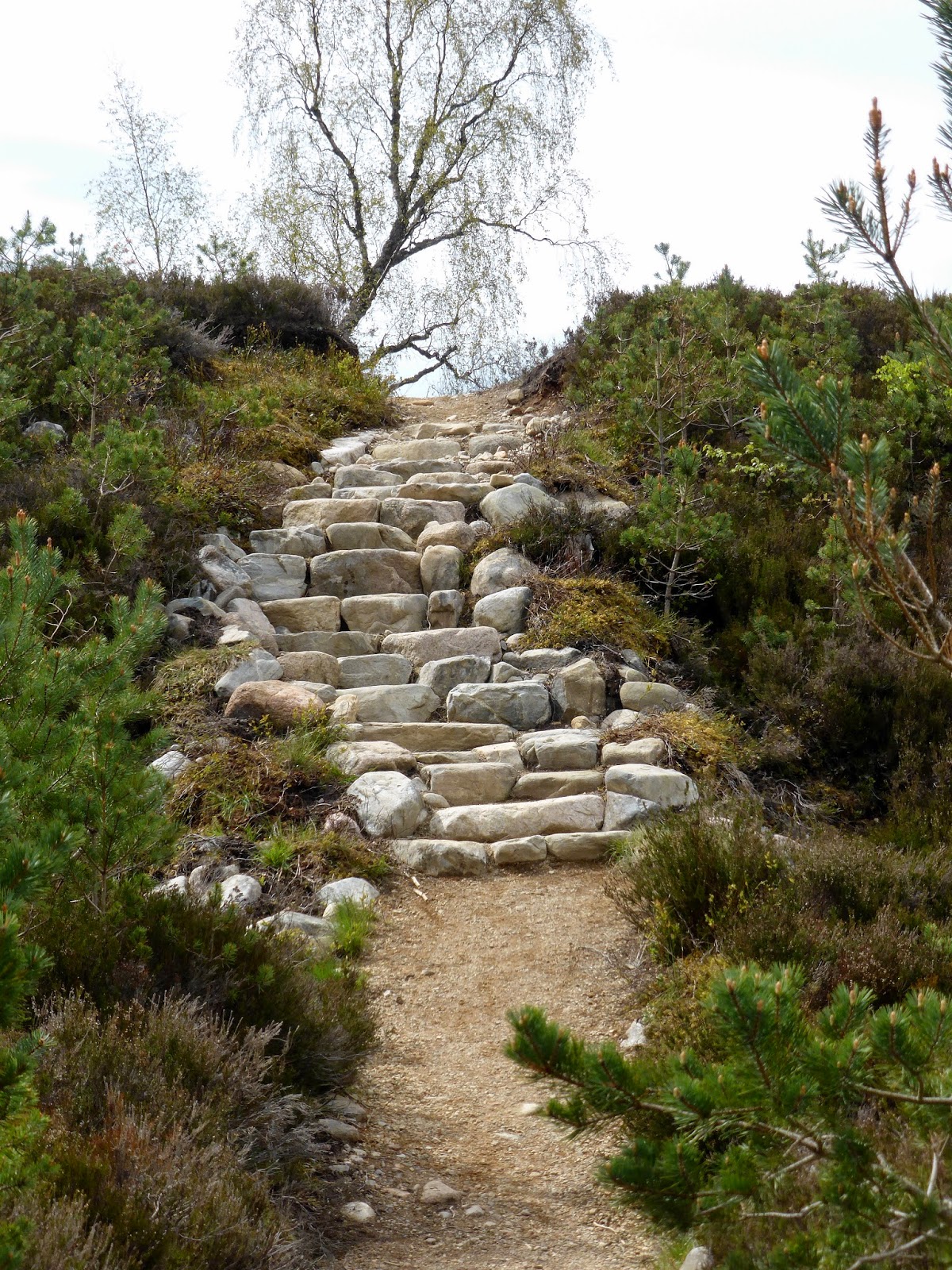 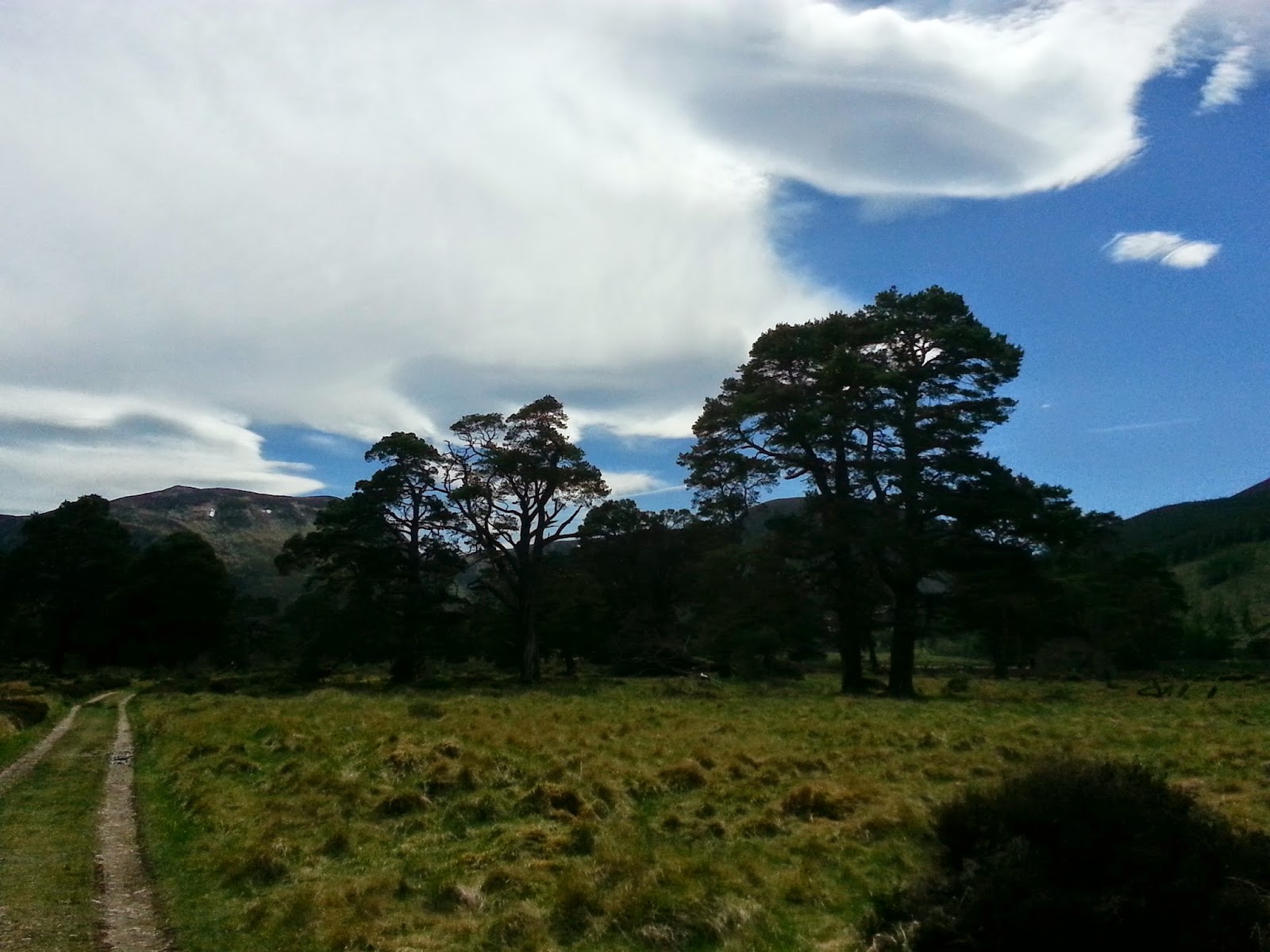 So, when we got to the bothy that was surrounded by Challengers, there was a brew of tea already going, and it is rude to refuse an offer like that.


So anyway, as per normal I had vanished into the distance in a flash.
Turning, Al and Phil were nowhere to be seen.
No worries....

I headed on down the track
I did actually take the lower track down to the ford.
Admittedly in slight error, but nice view.
So I had to clamber up the steep bank to the top path.
Been there, done it before.
At the top, Al and Phil had arrived, and we dropped down to a suitable rest stop near the bend in the river

We headed on over to our second rest (it was a HOT day) at Ruighe nam Leum. 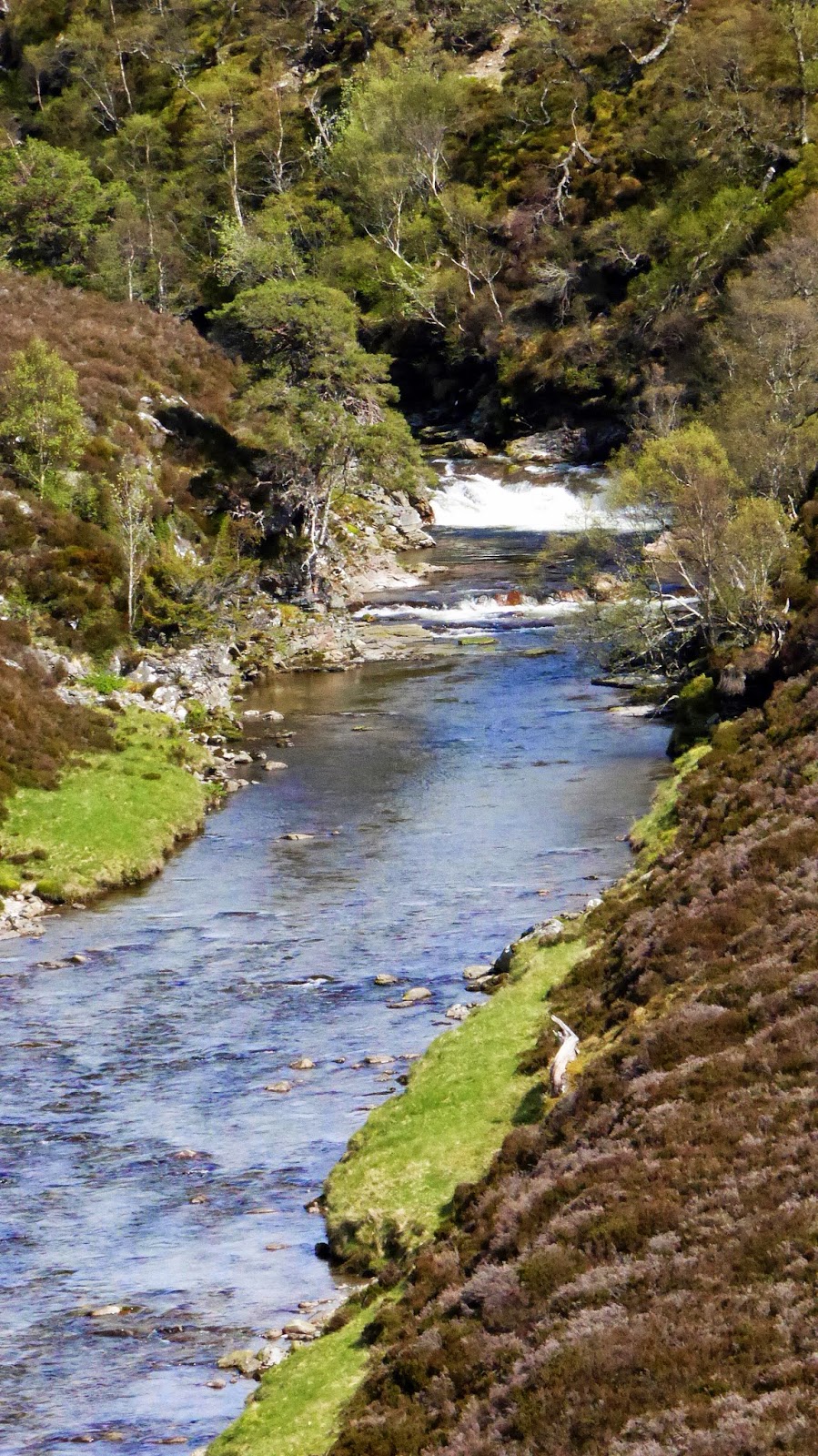 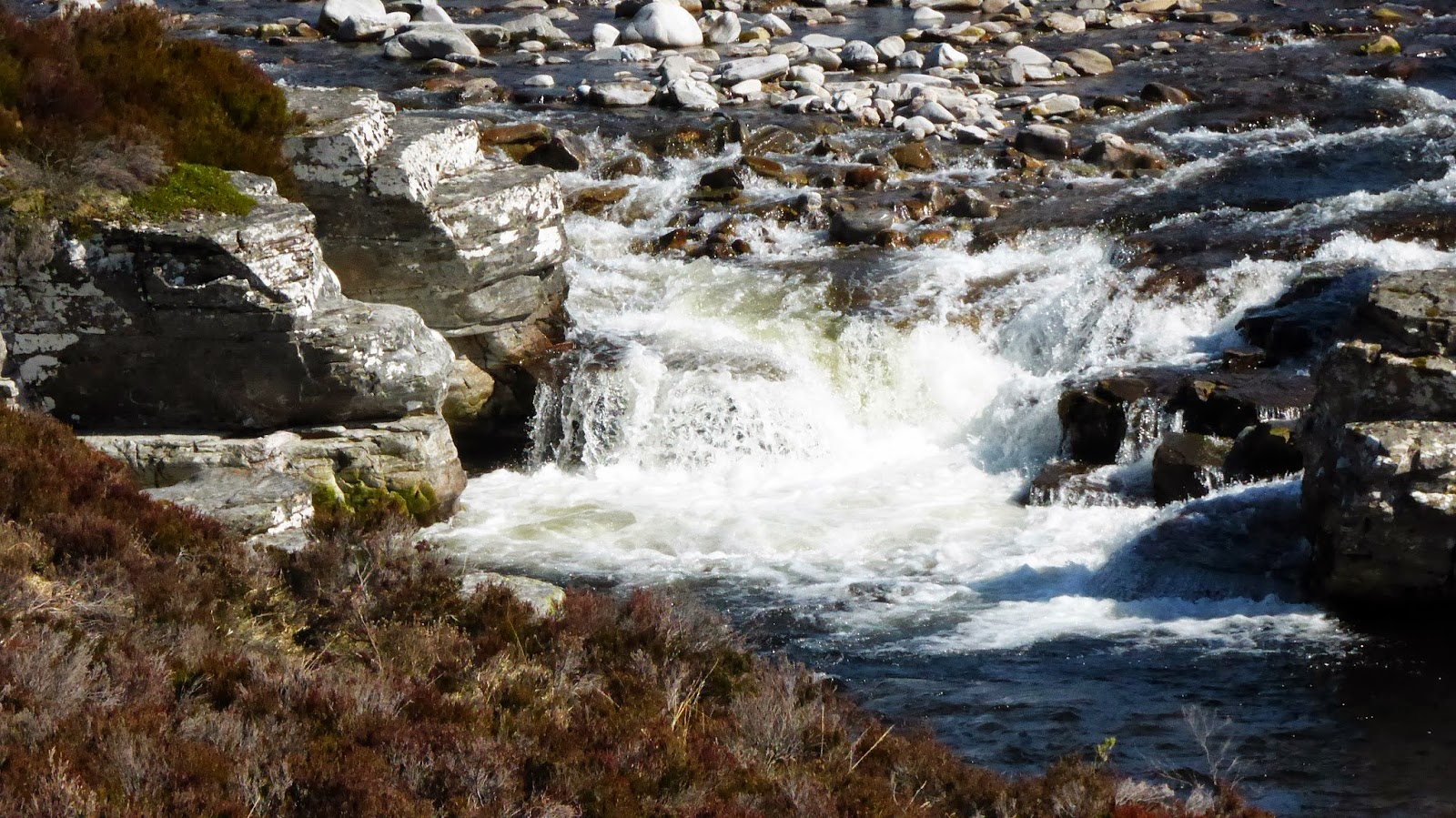 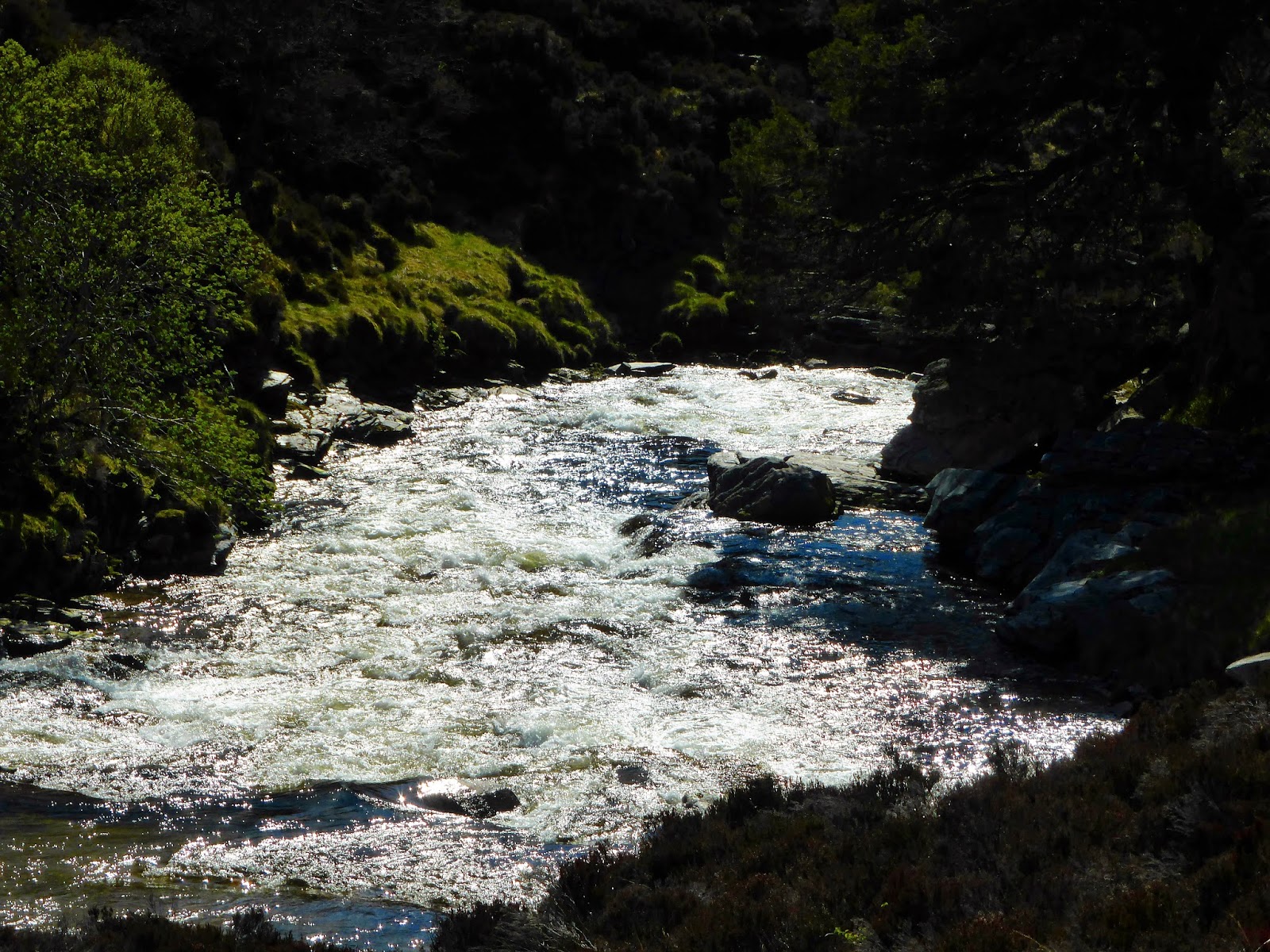 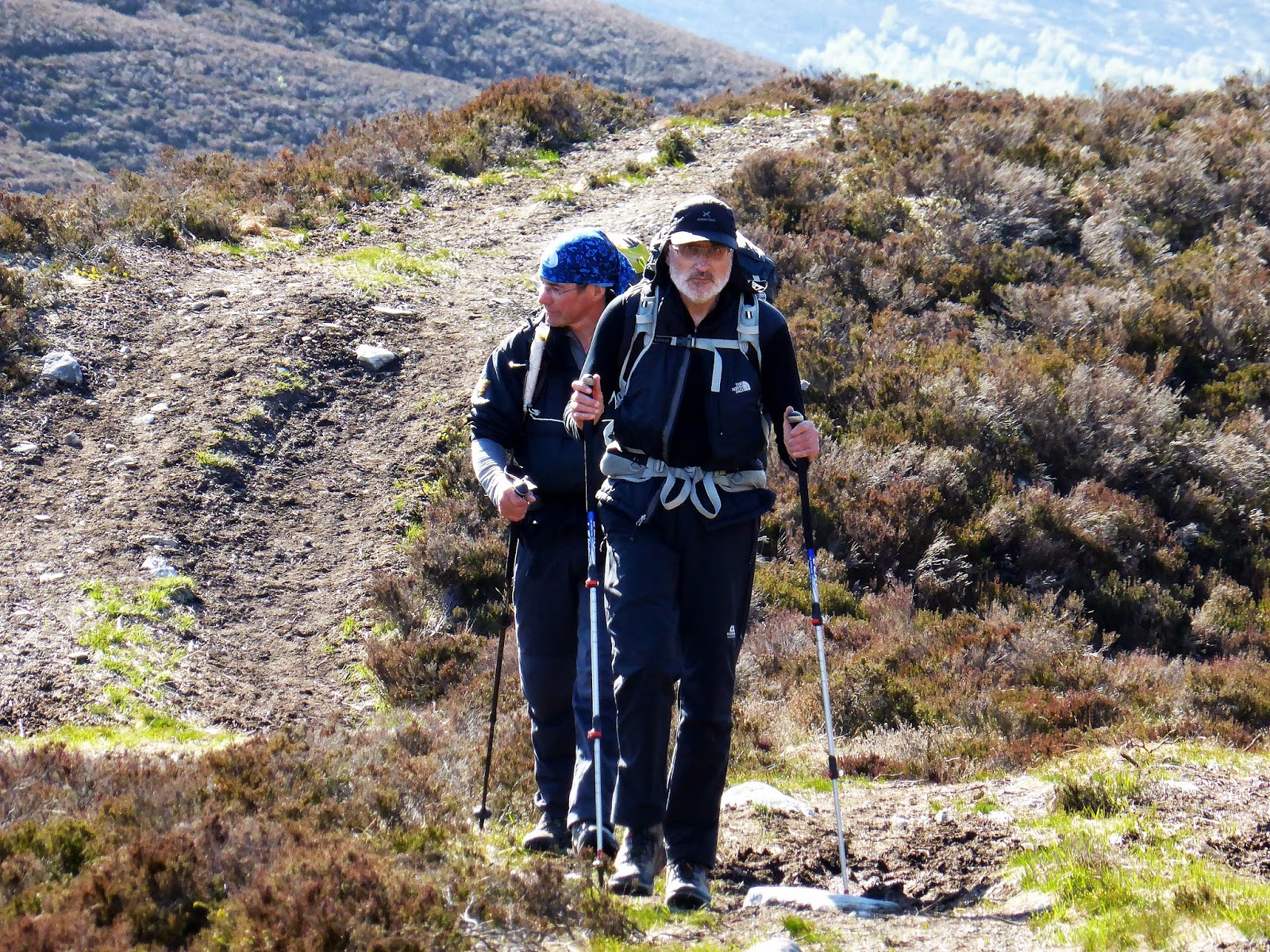 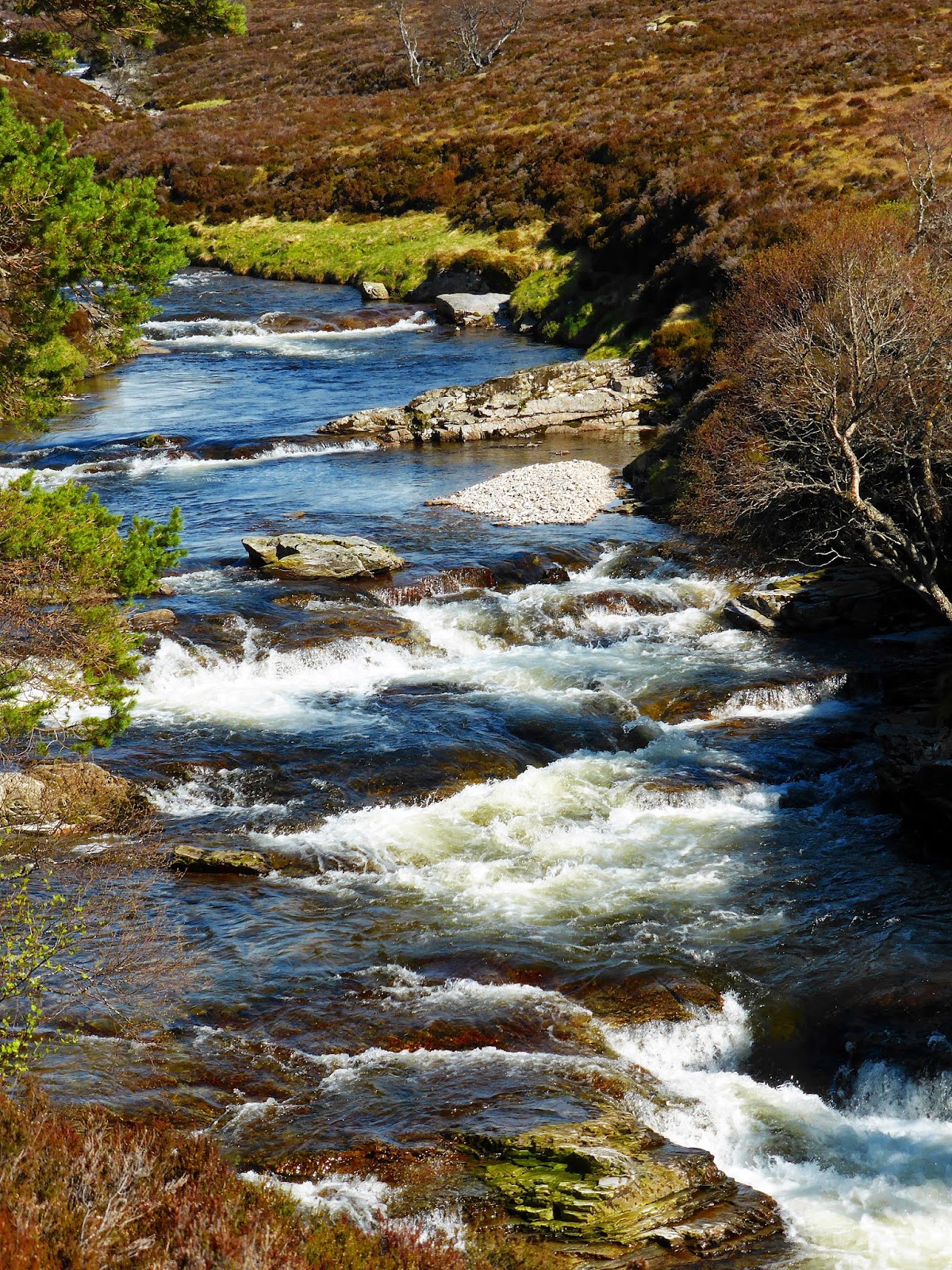 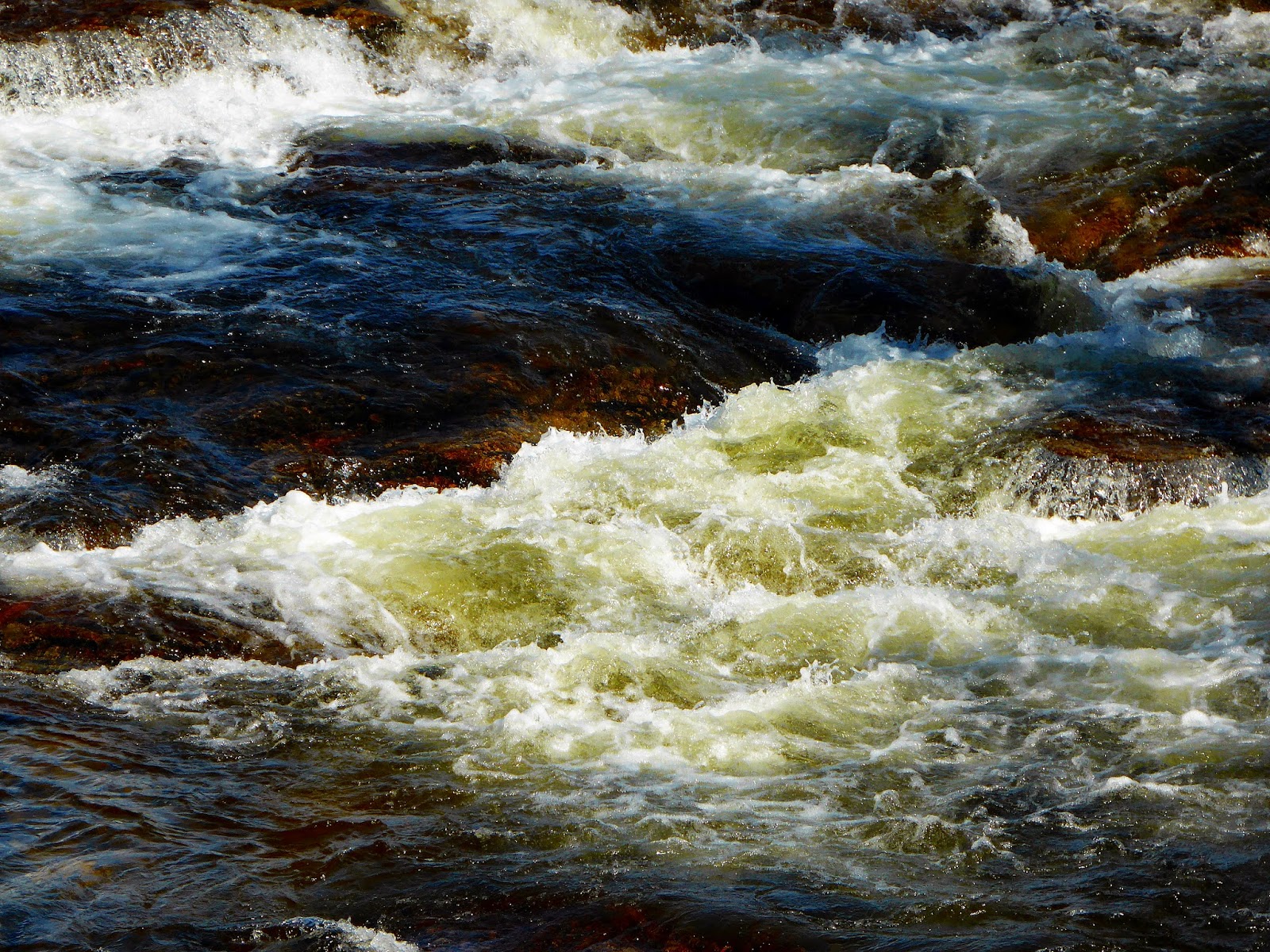 After another rest it was time to move on again.
Time was now getting on, although the day was still magnificent
We headed on over towards the old pony hut. 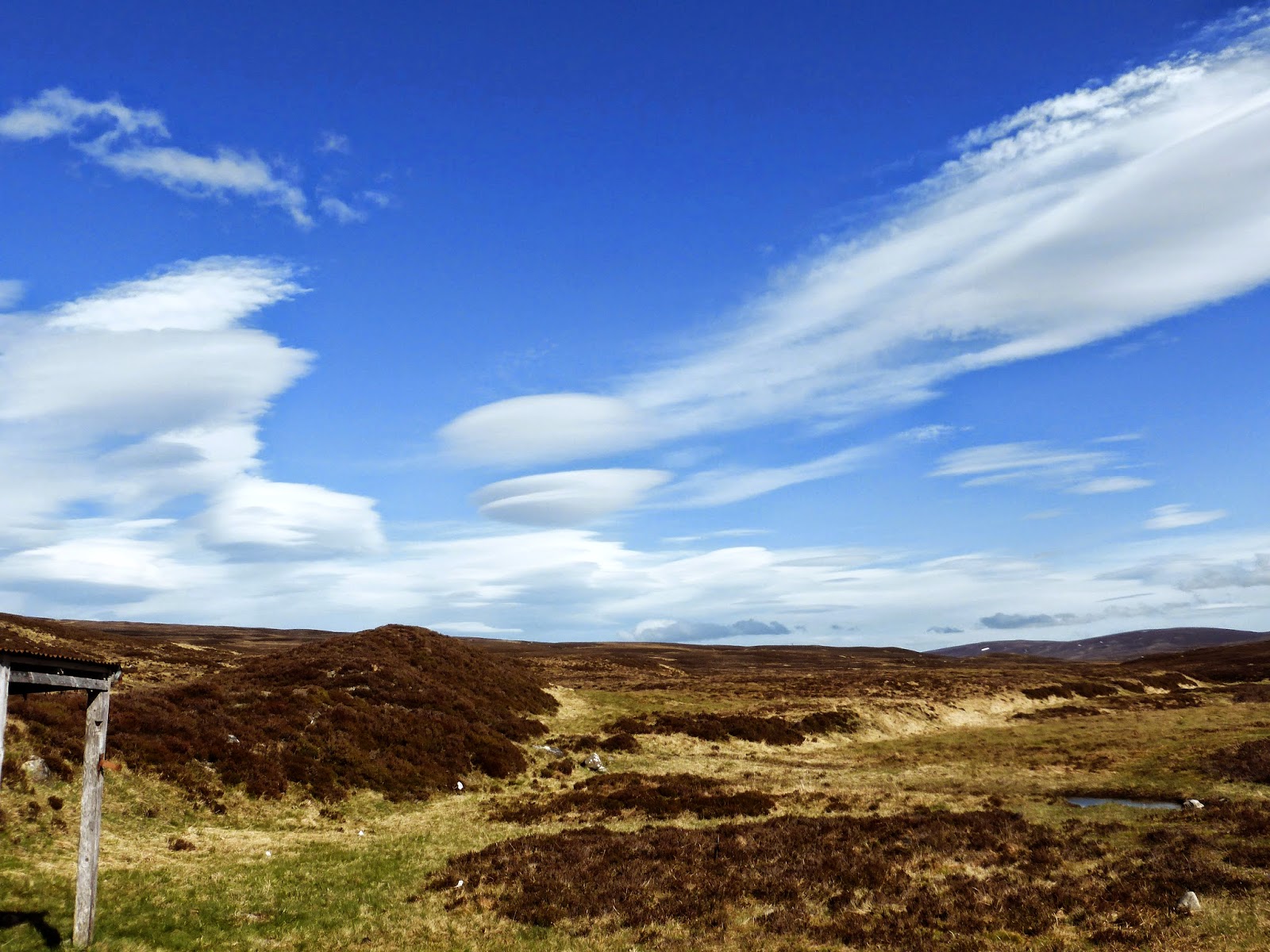 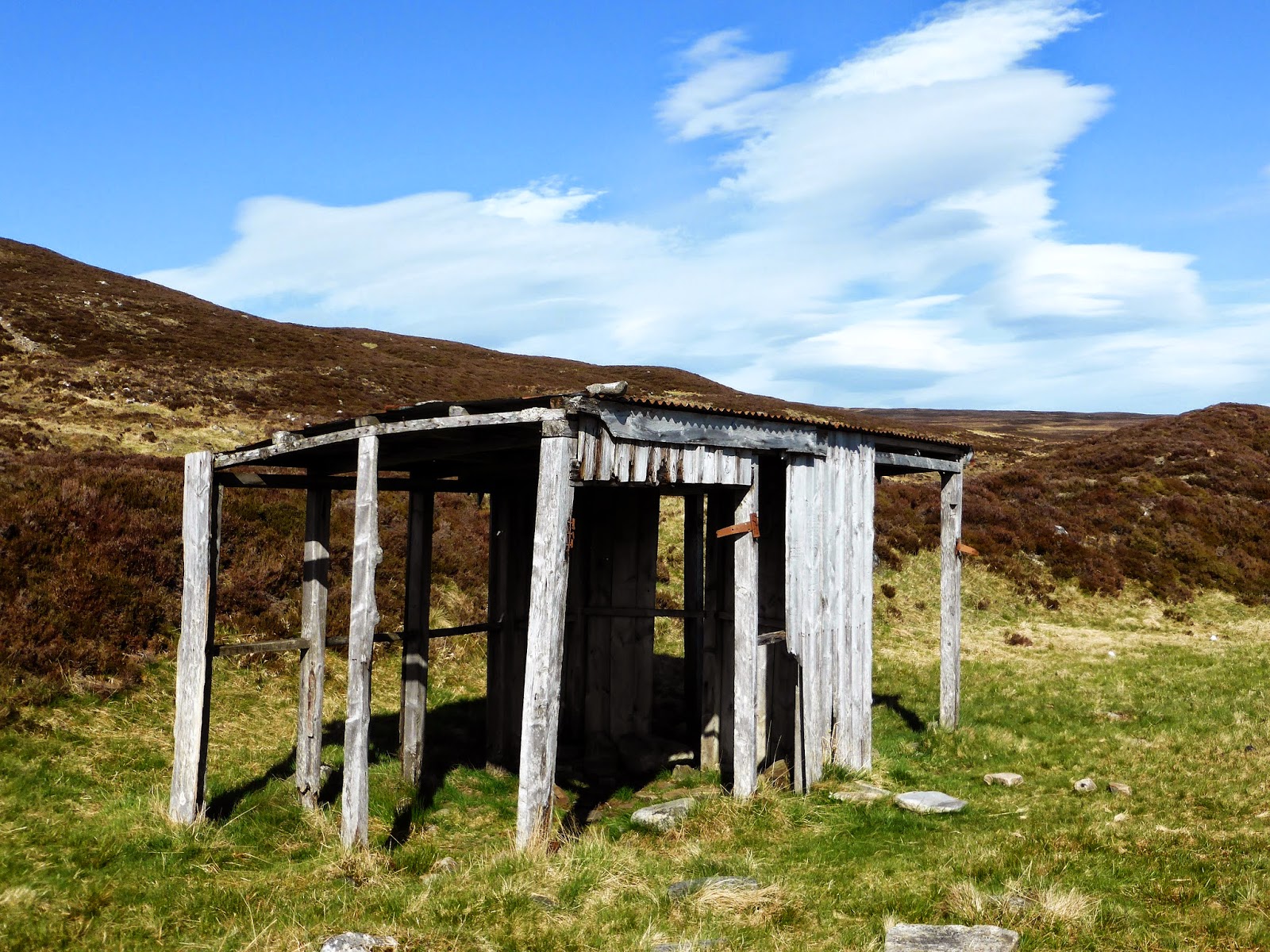 And then over to the bridge over the waterfalls

And then we carried on along the Geldie, with a possible stop up opposite the ruins of the old lodge.
As it happens, the wind was picking up, and we had done a fair few miles today, so we stopped a wee bit short where there was a nice bit of shelter.
I was thinking I could have gone on a few more kilometers, but to be honest, it was also bloody nice to stop

Well, that was about it.
We got tents up, had food, drank whisky and sloe gin, and went to sleep.
Tomorrow was going to be long again, because we had to get to Braemar.

Day 09 - The Geldie to Braemar

In which I had to walk with other people most of the day.
OK, strictly speaking I didn't have to :-)

I was making good time.
Very good time indeed, and before long, I was way past the Geldie Lodge, and up to the old desolate house where the track joins from Bynack Lodge.
The one with all the tape that says don't go in.

I very brief rest of the feet, and then I walked with them on the next bit of the journey.
On route we met convoy after convoy of walkers coming the other way.
We also watched as a pair of Mountain bikers struggled to work out where to cross coming down from Bynack lodge.

They trudged along the far bank through all manner of crap to where they then waded across.
Weird!

So anyway, I walked and chatted with Liz and David until we reached the corner of the woods below Carn Mor.
Liz cracked on, but I needed a foot rest and a drink, so David and I stopped and had a proper rest, where we were joined by Alistair Pooler, who had been doing HIGH stuff.


And so together we walked to the Linn of Dee, where we stopped down by the bridge for another rest, and also because Alistair needed some food.
And, because David had not seen how narrow and gorged the river becomes under the bridge.
We had at least 30 minutes rest here, shoes off, lying in the sun.
Excellent 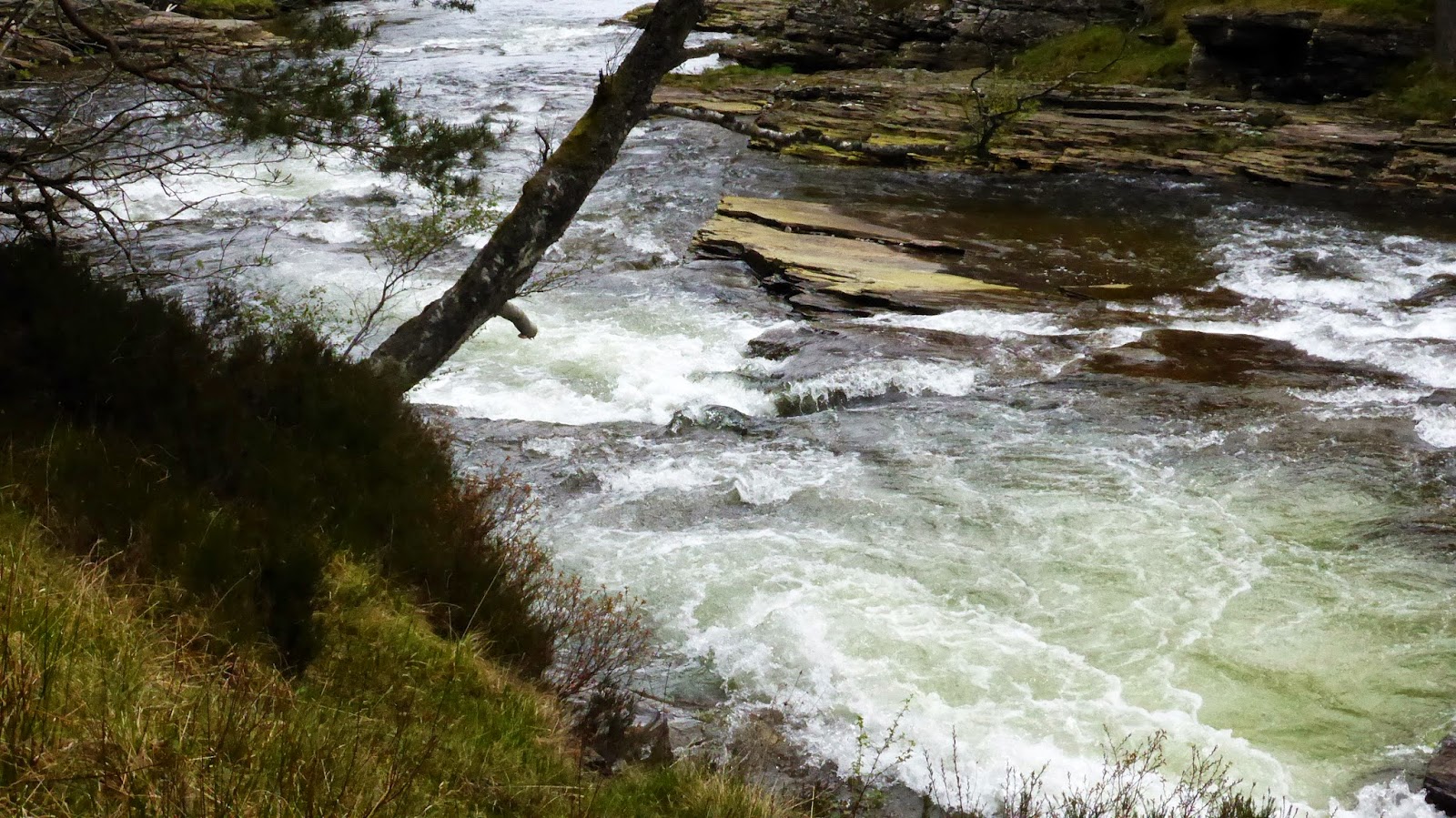 Too soon however, it was time to head to Mar Lodge, and so we went along the river and through the woods before climbing up to the road at the top.
I had never done this before for some reason.

As we got to the top of the track by the road, who should appear but Messr's Sloman and Lambert, right on queue.

And together we walked to Mar Lodge.
Where, other Challengers and a cup of tea of 3 waited!

I had told David to go and look at the main hall with the stags heads.
Because it was so IMPRESSIVELY WRONG 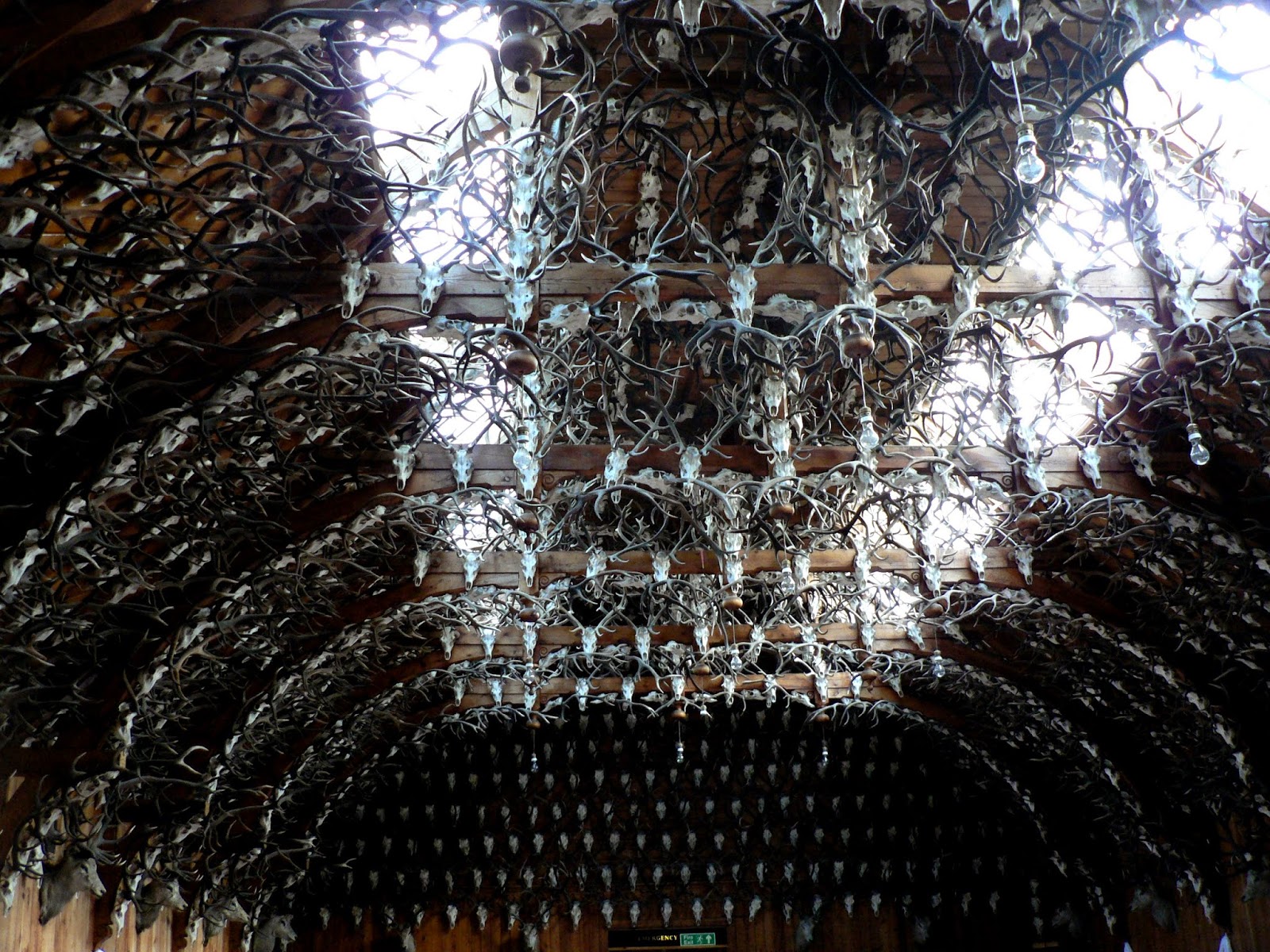 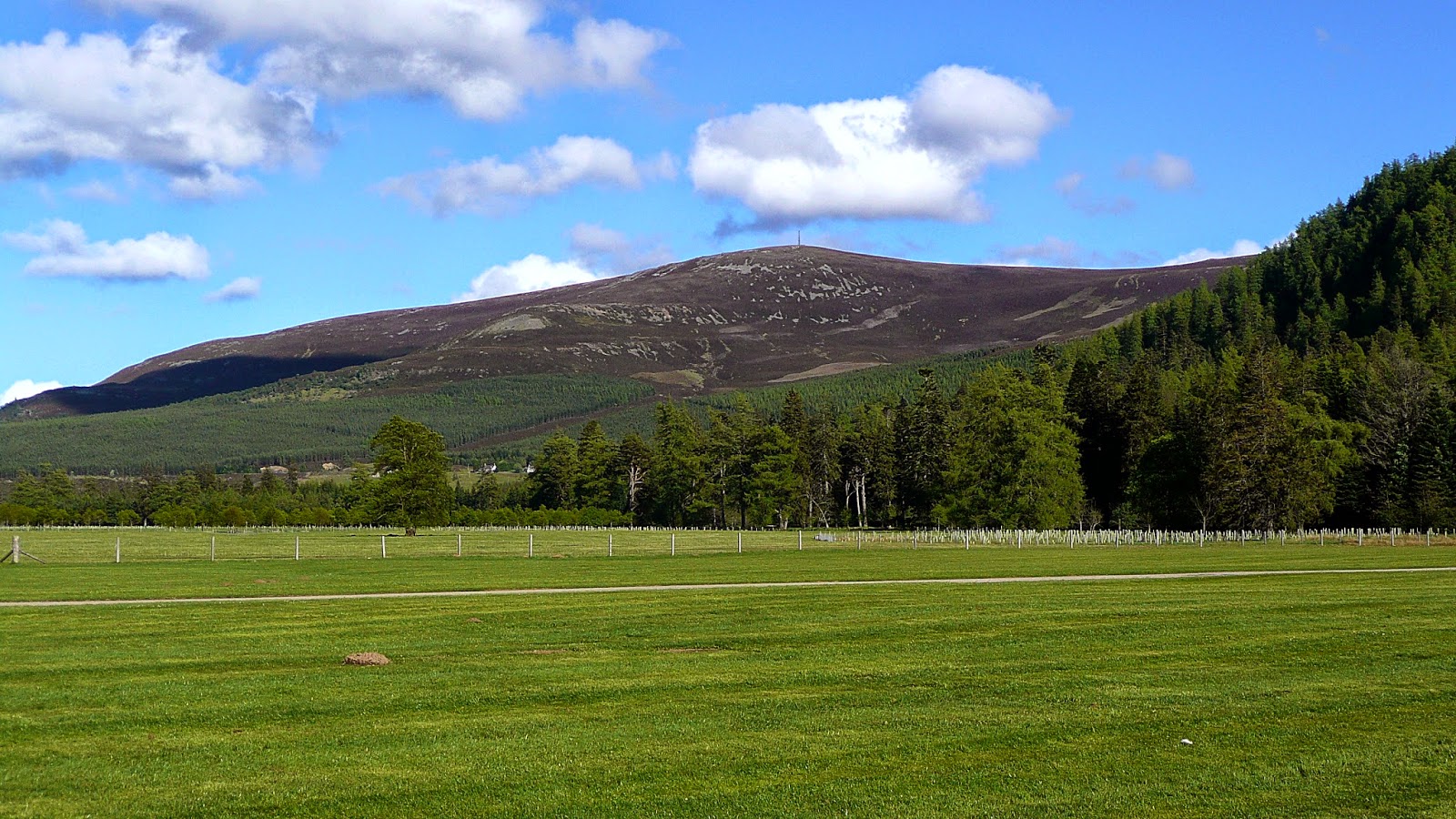 I left Mar lodge with David and Alistair.
Al and Phil did not want to go via the Morone Birkwood, and I did.
Can't be doing with road walking unless imperative.

So we headed down the road, or up the road, towards the woods, bumping into Mike Knipe in his car (not literally), who mentioned that he was taking 9 litres of home-brew beer to North Waterbridge.
Now, this was NOT on our route, but added to all the other things, was probably to have an impact on our final destination.

As we arrived at the start of the woods the rain began to fall.
It had been a splendid morning, and hopefully the rain would pass through, but it did need waterproofs. 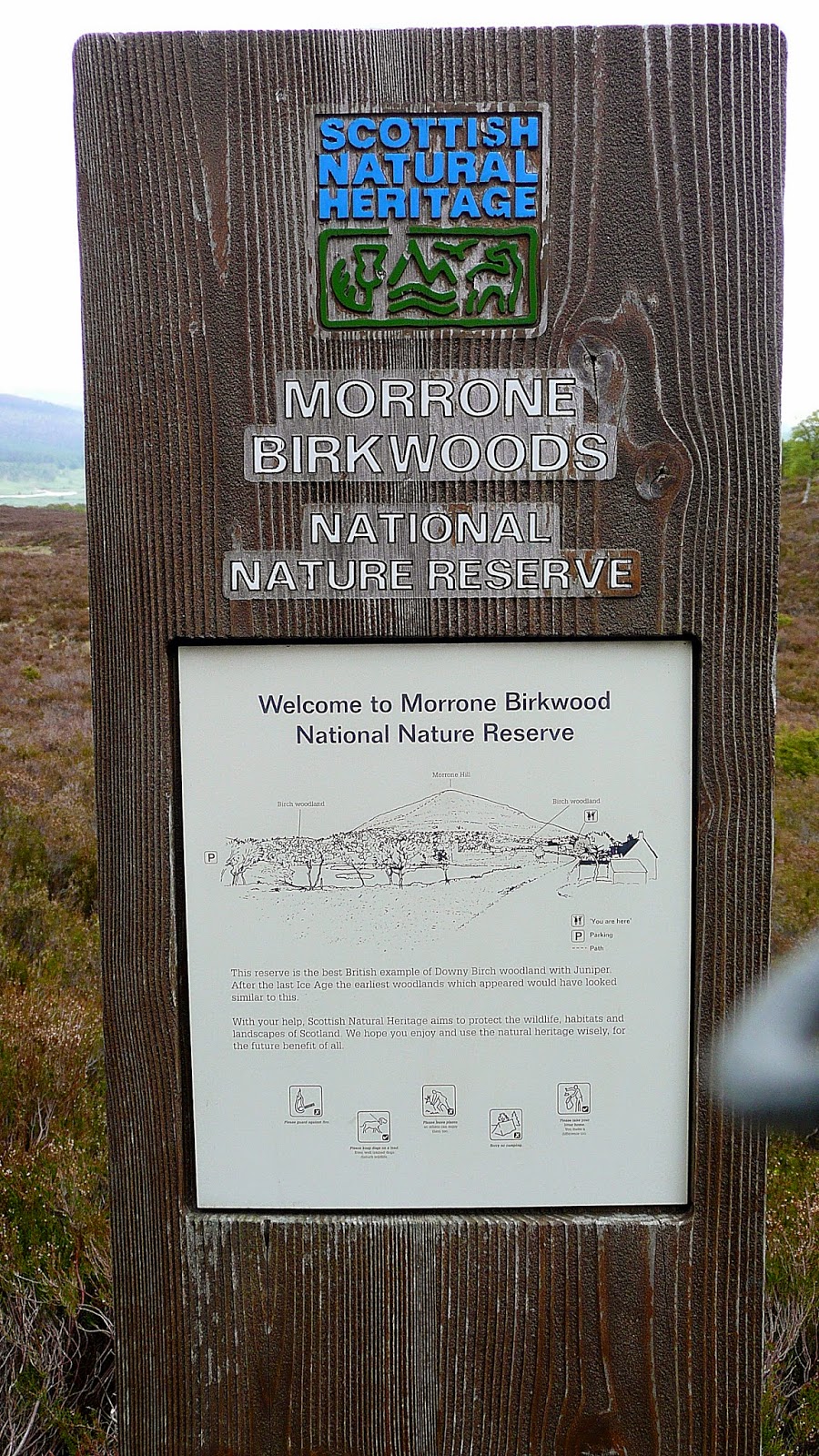 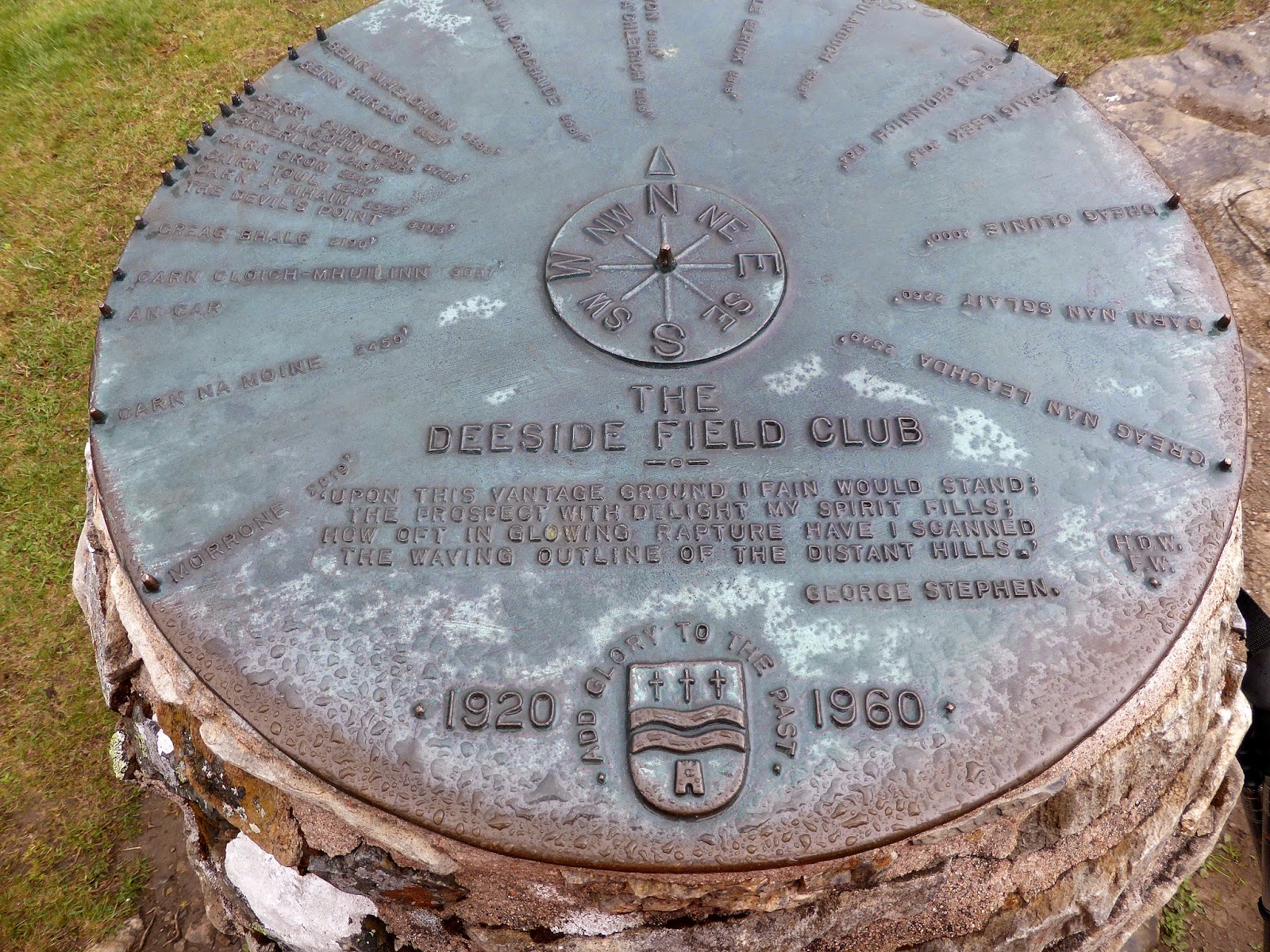 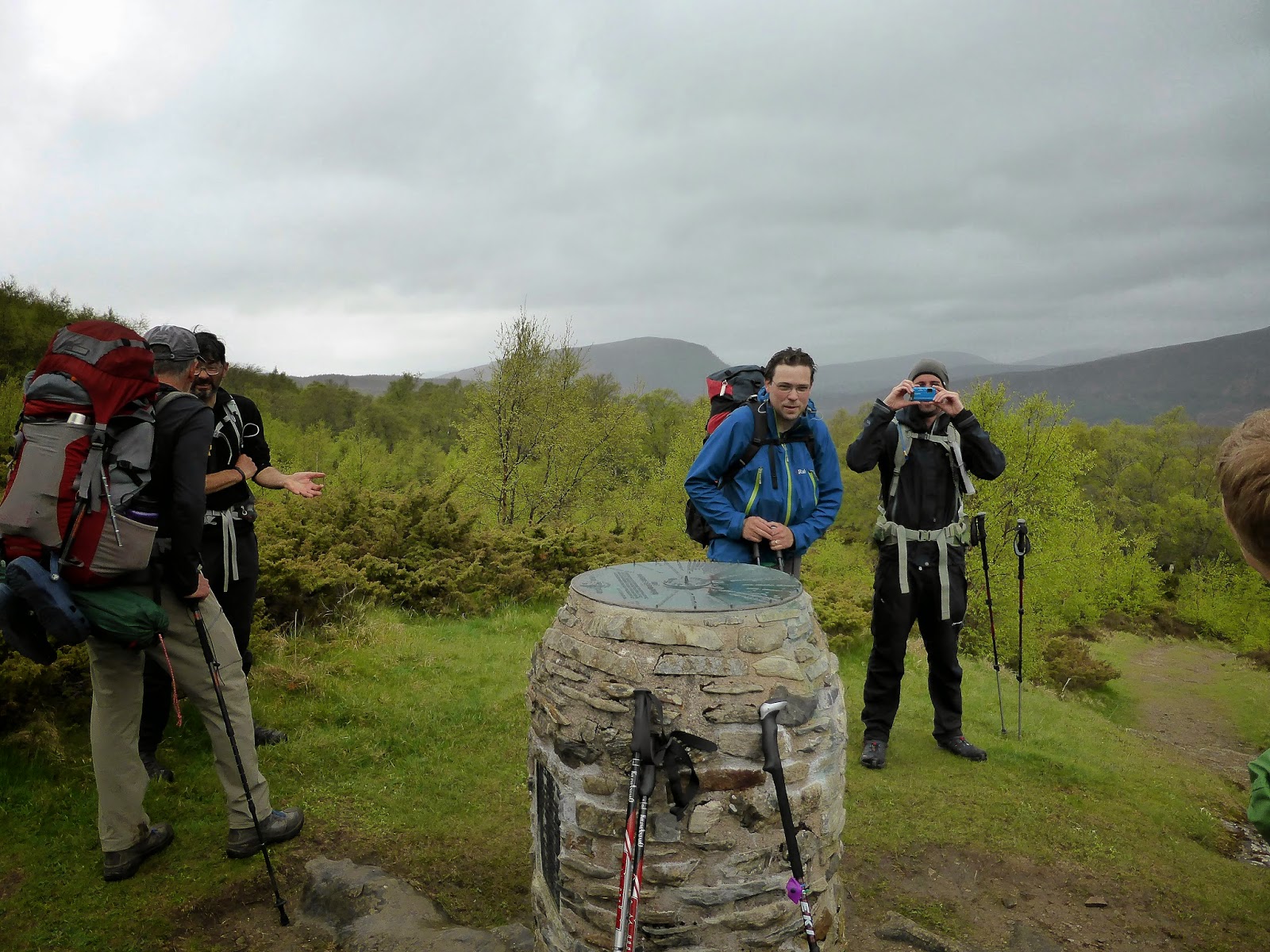 We left the top and dropped down into Braemar, where the festivities would begin.
At the FIFE ARMS, where else?, I caught up with Al and Phil, who may have been drinking beer.

After a bit of socialising, we headed off to our room in THE FIFE :-)

Well, it was not far.

Which we turned into an enormous kit explosion, and did a lot of gear washing.


And then we went down to eat and socialise and stuff.
A splendid evening was had by all.
I am not going top go on about it.

If you've been you know.
If you haven't you should....


I seem to remember at some point daring Mick (like that needs a second request), to go over and chat up the group of ladies at the next table.

We had a great evening, in great company.
It was interesting to go from the main bar into the rear entertainment??? room
where the coach party were dancing??? to some terrible crooned music

Bearing in mind, the average age of travellers, it was like two poles of expectation.

In the main Challenge bar, there were people of all ages, many older, living life to the full, and having a fantastic time.

In the rear room, there were people,
many of whom were younger,
Waiting to DIE!

Well, I know which room I want to stay in!

And so we did, well, apart from a rather disappointing trip down to the
Moorfield for a pint.

Please, someone bring back Bingo Wings

We even got told there to keep the noise down, because people were sleeping upstairs.

Suffice it to say, we didn't stay long.

AND IT WAS THE END OF THE DAY!
IN GREAT COMPANY!

By the way, Anyone seen Dennis?