Peddars Way 2013 By Bike with Daughter

Had to be Music Right? Well worth listening to. Bloody Good stuff!

Total distance inc travel to and from station was 121 km


Now, many do this as a walk, but I think, if you are NOT considering doing the Norfolk Coastal path as well, that it is a better bike ride, what with chunks of it being on road, and long bits of it being very straight and for walking, a bit repetitive (my opinion)

We started the day with a getting up at approx 7.30.

Not exactly to H's liking, but we had to leave by 8.10 to make it to Waterbeach station to get the 8.14 to Kings Lynn.
We also needed to buy tickets (that would be me then)

So we left with just about enough time, so had to go at a goodly pace to reach the station.
Luckily this transpired OK, and we got there with enough time (just) to get ready.

The Train arrived on time, and we got our bikes on.
And ourselves.

The forecast was for good weather all day, but I still had contingency plan waterproofs, and other assorted bike repair stuff, plus padlocks etc in the cheap Karrimor sack (we'll come back to that)

The journey is about 45 min, and before long we had arrived.

First job was to pick up rations at Morrison's and then head off towards the Wootons and then Sandringham before heading over to the Peddars way.

Town navigation is a bugger.
I warned H.

After a small loop we arrived back at the station, and then got the correct cycle track out.
This is a wiggly but scenic way out, as long as you don't miss the signs. It is an ok ride out through the Wooten's and across to Castle Rising, where we stopped for a drink, and a look around 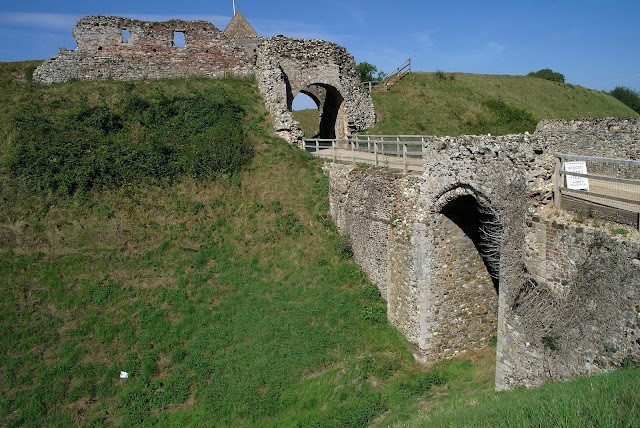 You can go into Castle Rising, but we had a long way to go this day, and I no longer had an English Heritage membership

From here after a brief stop and a drink, we made our way across to the Sandringham Estate.
Much of this route is very easy riding, and I would thoroughly recommend it as a day ride. 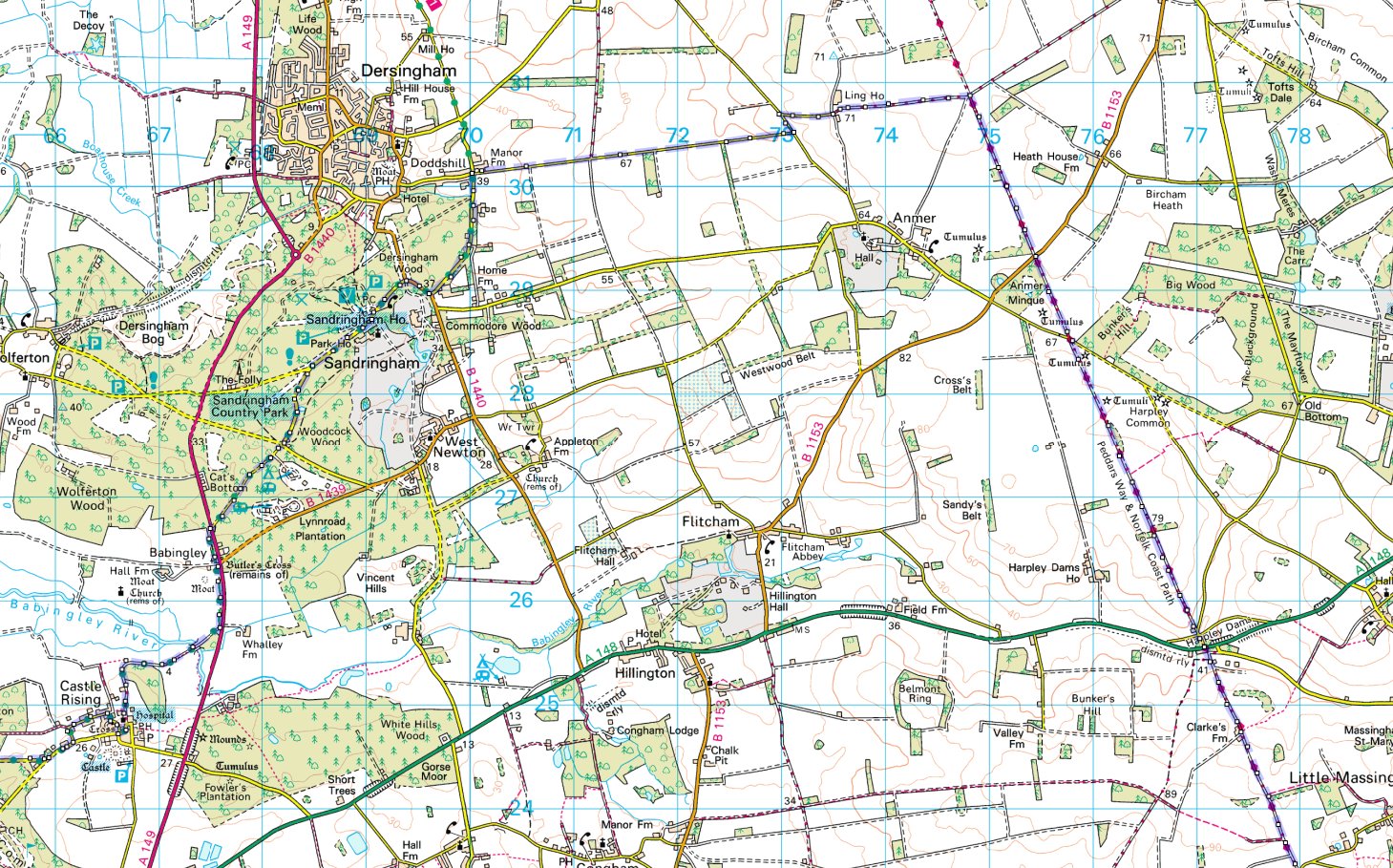 Now, don;t get me wrong here, but Sandringham when we got there, what with it being a pretty warm and nice day, was predominantly old people using zimmer frames, children who did not want to be there, and overweight people who had struggled there in their expensive 4x4's to waddle about.

No one else was on a bike.

So after a pause we trundled on towards Dersingham and then across from Doddshill via Ling House to pick up the Peddars Way. Not quite at the start.


So after another rest, and some fluid, it was finally time to head South.

We had a choice of stopping at Massingham, but decided that we would see what time we took, and then depending upon that, we might carry on to Castle Acre for afternoon tea


I am not 100% sure if H should have been the other side of the track with her bike.
So since the farmer was coming (probably to feed the piggies), we headed off down the track to Castle Acre.
Which was an easy ride, ending up on road.


After a brief walk round the castle, we did a brief round down towards the priory, but stopped at an excellent coffee shop for tea and cakes and lemonade

Then, all too soon it was time to head off.
We still had 50+k to go, and we needed to get to Thetford to get the train.

The following pictures are of the Priory 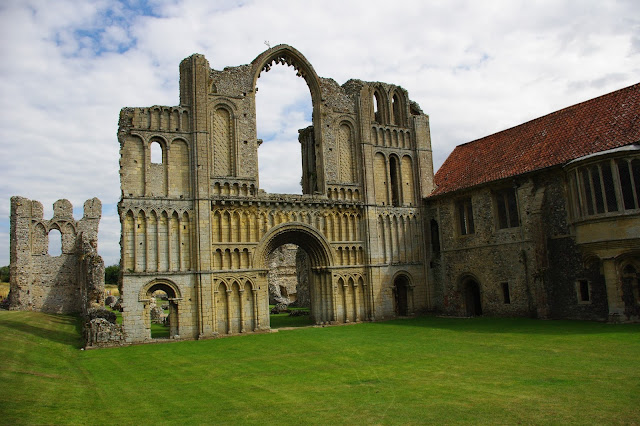 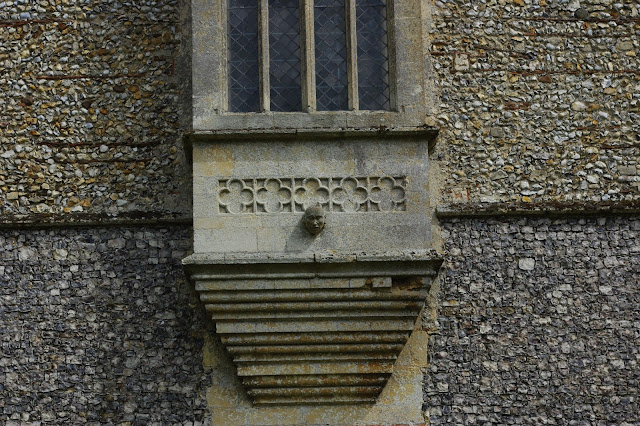 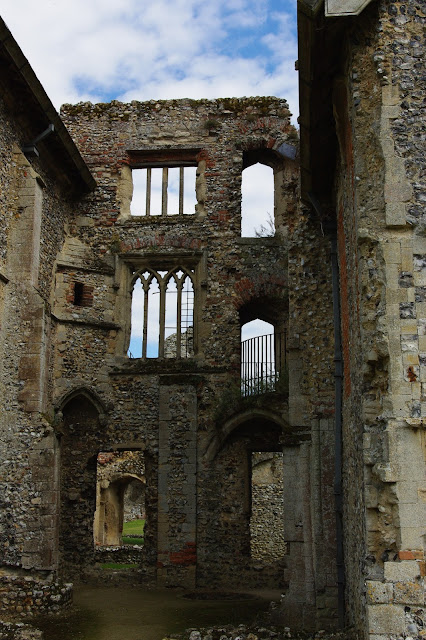 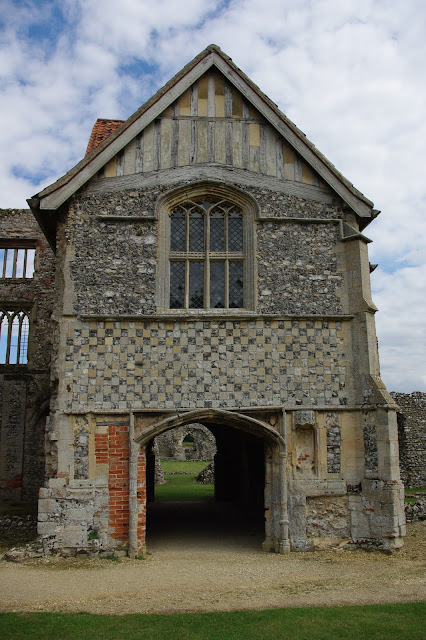 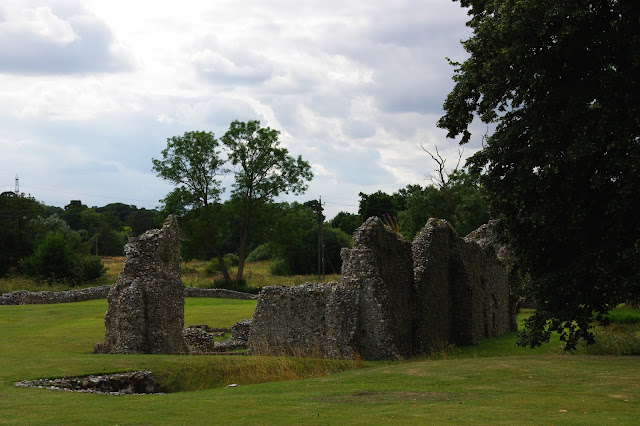 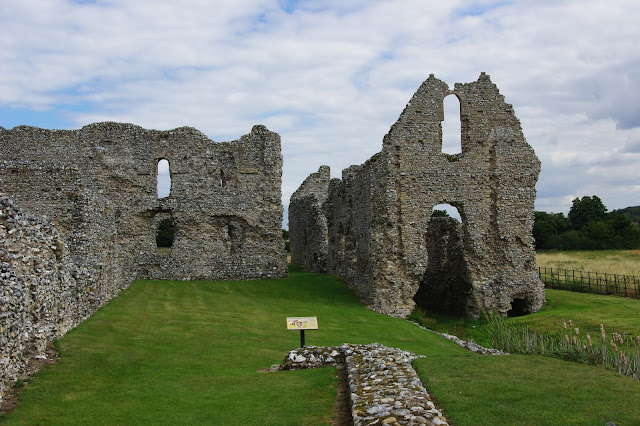 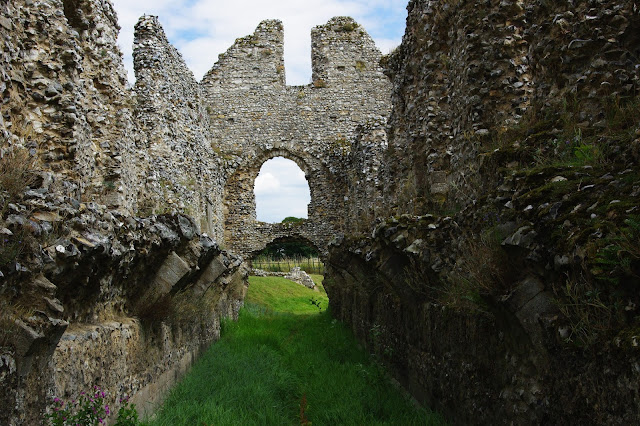 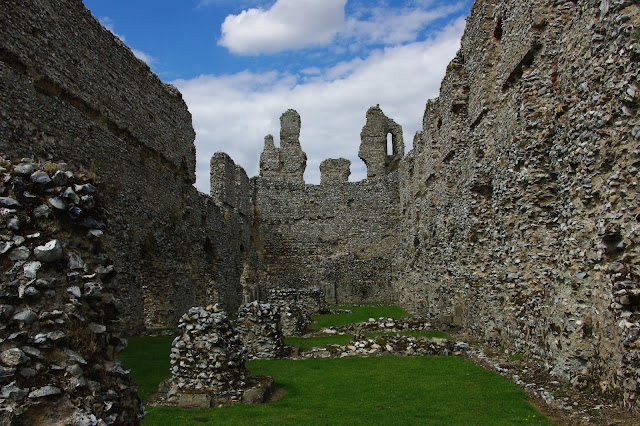 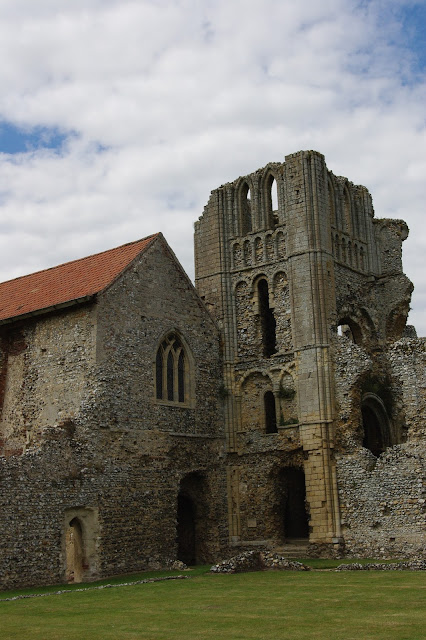 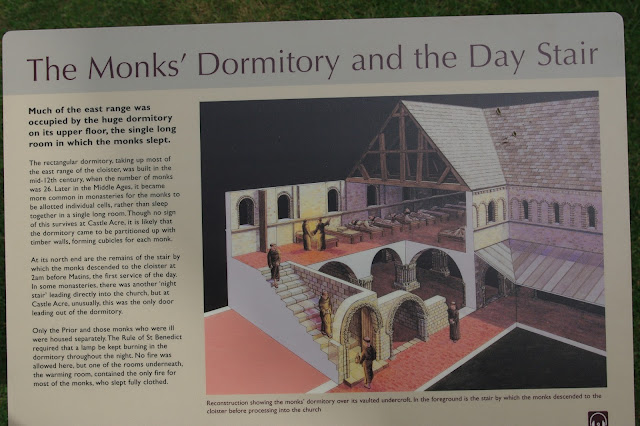 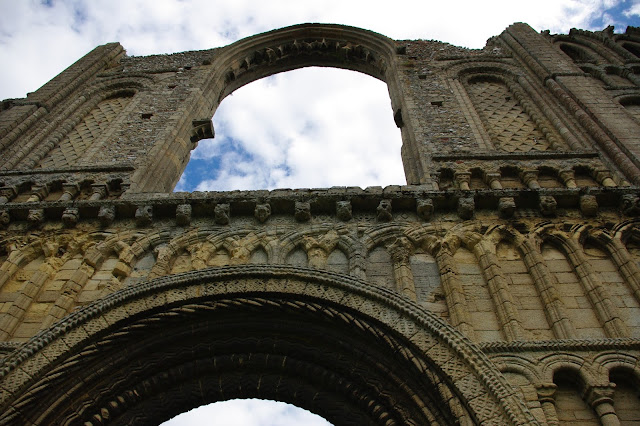 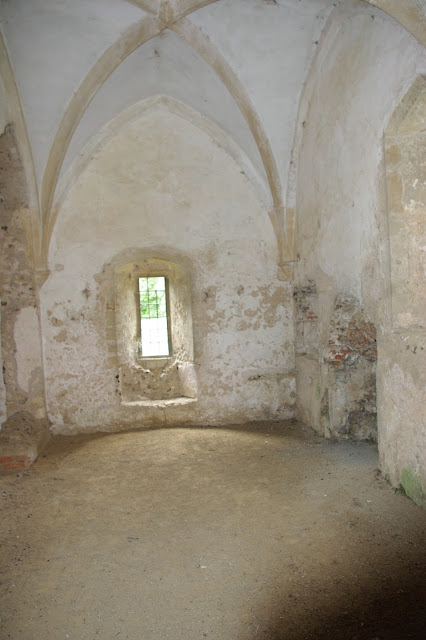 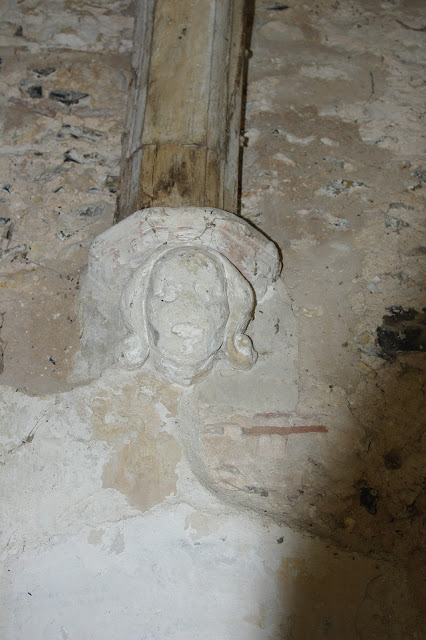 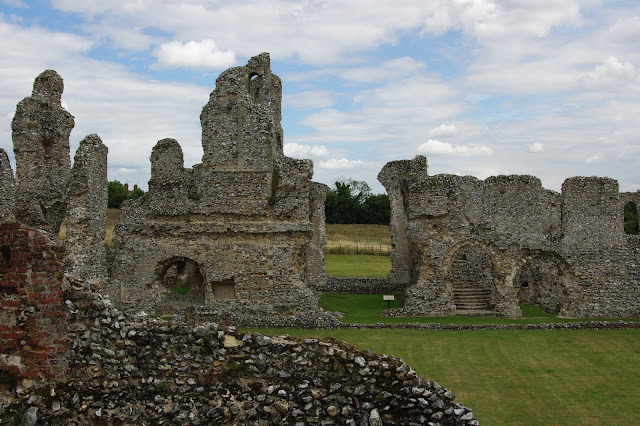 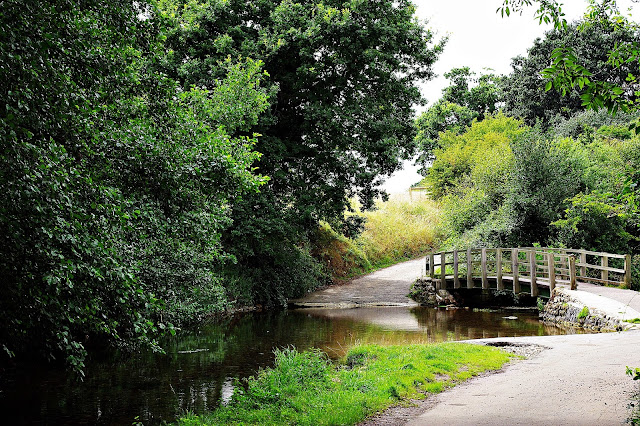 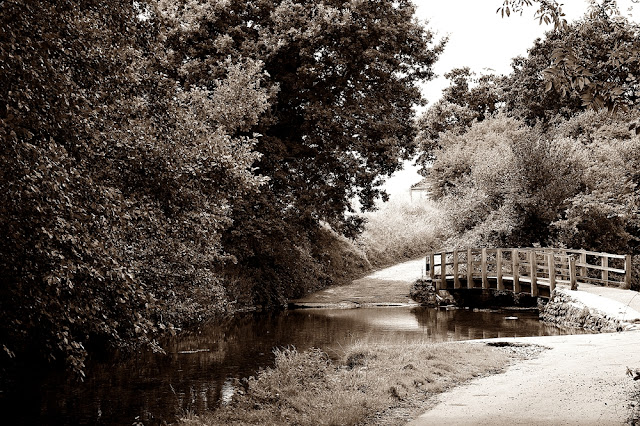 This is an older picture, since this time, a highways lorry had made a pigs ear of the Ford, and was being towed out.
Luckily we were on bikes, and even then getting past the lorry was tough.
But not as tough as it was for the people who were waiting to get out.
Also not as tough as the tractor that was blocked by a highways lorry parked across the end of the road to stop people going down, but with NO notice of why.

I suspect the farmer from the farm half way up the track who was trying to get out was well and truly pissed off.

He went very off road to get past.
If I had been in the tractor, I would have been tempted to push the bloody lorry into the ditch opposite. 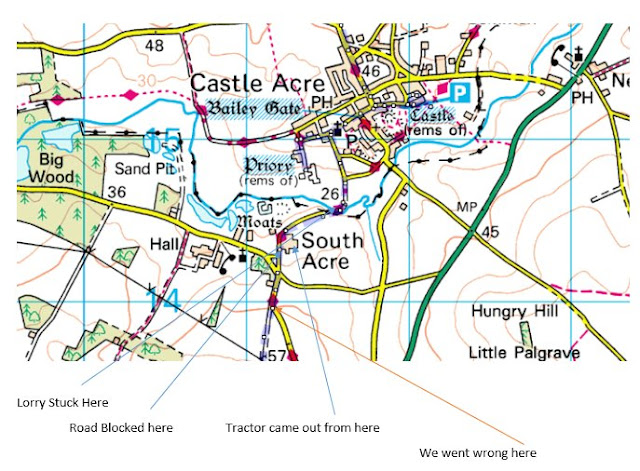 Sadly at this point I made my navigational error.
Yes I admit, that I could have bothered to look at the maps.
But fading memory is a terrible thing.
So I dragged Harriet off road via a track that gradually became less and less navigable until we arrived at a road.
It was obvious that this was NOT the Peddars way.

Time to get the maps out and take a bearing.

It was obvious that we were West of Swaffham, and so needed to head East. 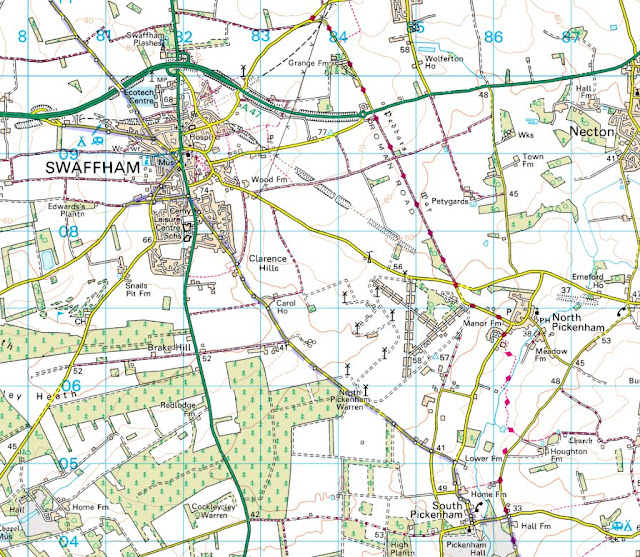 In all honesty, the overall distance was not much difference, and we ended up picking up the track again at South Pickering.

H was NOT impressed.


Eventually, back on track we headed South again to Great Cressingham, where there is very little. 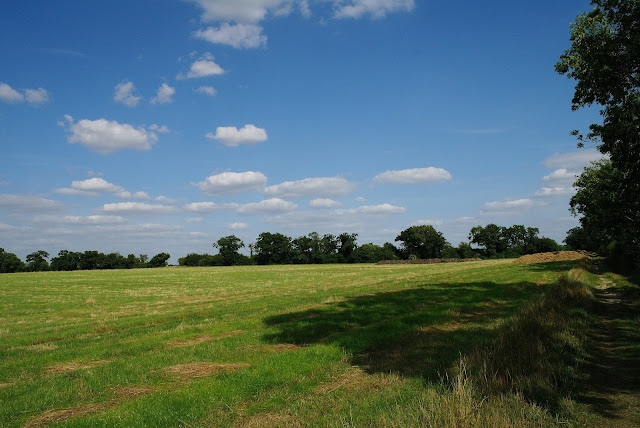 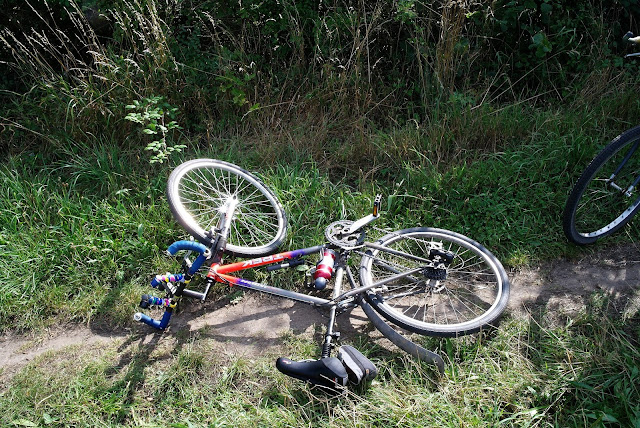 We then picked up the track South again.
A scenic but long route that parallels the Military firing area.

We had heard firing whilst we were heading to here, but this had stopped by the time we arrived.

However, we did see a lot of soldiers in the trees.
I suspect that they may have been TA.

We carried on along a track that took us through the woods as we headed south into more forest.

Finally coming out at Stoneybridge, where there was a very tempting Pub, that was vetoed by Harriet, who now just wanted to get back.

There is a short section of road at Stoneybridge, and then you pick up the Peddars way again heading even further South.


At this point for us it was not that much further before we needed to head West to Thetford.


We crossed the railway line and then the very very busy A11, full of nasty fast moving lorries and robotic drivers heading home after a day of air conditioned toil and strife, oblivious to our 2 bikes.

More south before we finally came out on the Bridgham road
The actual track of the Peddars Way is rather unclear here.
We turned right onto the road to Thetford, and shortly after I made stupid tired navigational error number 2
Rather than check the map, we took the signpost to Thetford that took us down the short hill to the A 1066 near Shadwell Park.

DO NOT cycle along this abomination of a road.
Go straight on.
AND if you do get to this road on bike, do NOT accidentally turn left because you are looking at the map the wrong way up.
In that direction lies utter madness, and a bleeding long bike ride.

Luckily I spotted this error quite quickly (well, after 2Km), which was NOT quick enough for H, who had now lost all faith understandably.

We turned round and headed back to Thetford.

DO NOT let the map distance fool you.

It is Fucking Miles and Miles, as the bloody lorries thunder past at ridiculous speed and even more ridiculous proximity. 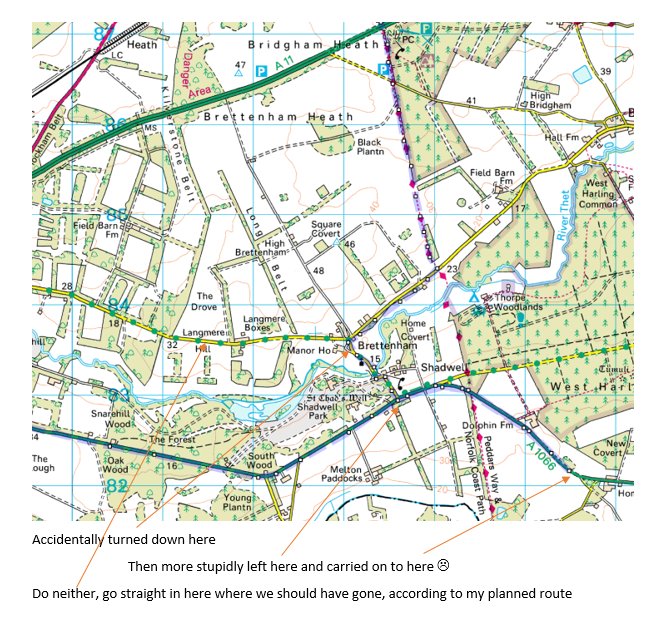 It seemed like forever before we got to Thetford where we bought tickets (that's me), and waited 30 min for the train.

Then we were on our way home.

We arrived at Waterbeach at about 19.20

And then we were back.

It had been a long day, and a lot of Kms.

But excellent weather, and despite my lazy navigational blunders, a great day out.

But don't tell her I wrote anything about her in the blog.

Soon, I will write up the Dartmoor trip. (Honest)
But not until it has become more fictional in my head