WHAT HAPPENED TO THE BOXING DAY WALK?

Apart from the weather which to be honest was not great, Lucy has not been well over Christmas and as I write this, still isn't.
Indeed she spent most of Chritmas Eve lying down having almost passed out in the kitchen (and NO alcohol was involved before, during or after - genuine illness)

So, instead of Boxing Day walk I took the dog for a run to Cambridge.
I say, to Cambridge, but that was not the actual intended destination.
My intention was to do about an hour.
Any more and Dawg needs a crane to get him in and out of the car.
Also, I still have this stuffed up nose, bloody, bloody, bloody, $%$&&ing, cold thing that I cannot seem to offload.
That might be because I keep going out running of course.

Anyway, we set off at 11.15 (that's me and dog) intending that Lucy would collect us on the way to her Mother and Father's house in Cambridge about 12.20.

I had not heard anything by 12.15, so I texted through for pick up point details.

"Olly not up yet, he's being a bit awkward (Teenagers). We will be at least 30 minutes.

Bugger!, I will carry on but start to head towards Cambridge.

Now, my route (there being a lift after an hour?, had taken me overland, away from Cambridge).
So at this point, I was still just under hour from Cambridge, at my rather pedestrian running pace.
I did not tell Jasper, because he goes all misrable hang dog look, and starts to snurkle about. 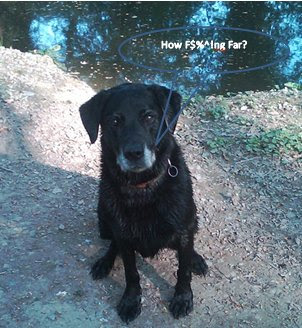 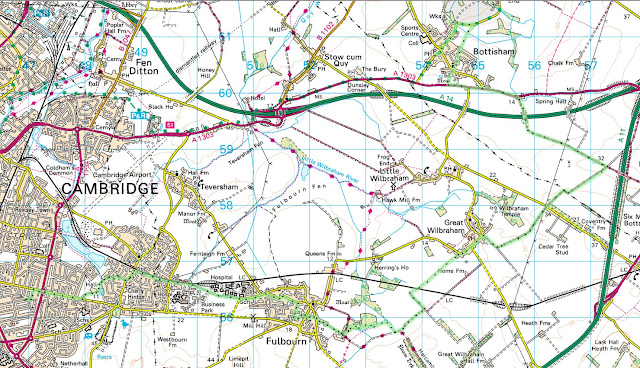 We gave it another 20 minutes and I rang to report location and check on process.

"Olly Not up yet, we are going to be at least 20 more minutes!"
"OK, I will go to Fulbourn and start heading to Cherry Hinton" 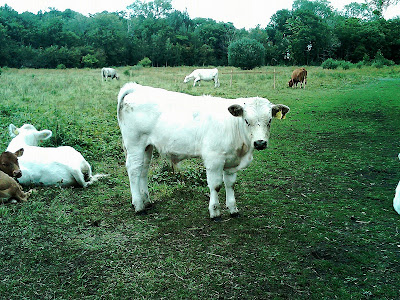 So at Cherry Hinton, I texted!

"At Tesco store will go slowly"
Reply ... "Olly only just in shower, at least 20 min"
Text Back "Oh Crap!  Dawg and I are knackered big time!"

At Cherry Hinton (which to be honest, is only about 20 minutes away (if that) I did another check.

"Leaving in about 10 minutes!"

OK, you do the Maths!
We ran to Cambridge, and we got there first! By some margin.

Eventually Lucy arrived and all was good.
Apart from the fact that I was truly Cream Crackered, and the dog was dead on his feet (paws), Lucy was not well, and could not eat, and we had to get back to take the cat to the vet.

Did I mention the cat? 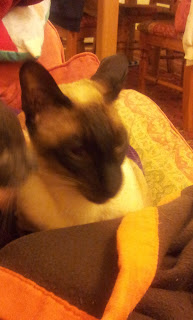 He had a bite on his tail that had become abscessed.
So he was off to emergency vet for extra expensive treatment, and was later to return home with a backside like a Baboon, but minus the dreadful abscess. (Nice).

Did I also mention being kept awake half the night as well, by the other cat that brought in 3 rats for us to play with from the fields at the end of the garden.

Anyone want to know the best way to drop kick a cat over the shed.
(No I didn't ok, but I had evil thoughts at about 4.15am) 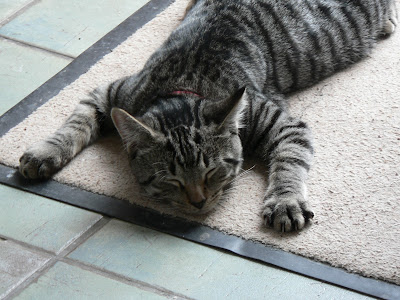 He'd make a good rug though!

TODAY! (27th) I did not get up until a bit later.
I reckon my cold is actually not a cold, but a Sinus infection, because my nose is not a nice place to be, and I would prefer it if it was not attached.


Continuation of the Blues Theme
Buddy Guy - What Kind of Woman... Is This? - For Lucy .... because!

And the Boxing day Walk?

That's postponed for about a week.

I have to take my Mum's friend back to London.
Olly and Harriet to London to spend some of their Chrsitmas Money.
In all honesty they are now richer than I am.
To clarify those combined statements...
They are going to spend THEIR Christmas Money!


Then there is the New Year (when Maybe the New Year Walk if everyone is well enough)
Then back to school for them and Lucy, and also back to earning some money for me to pay for Christmas.

Thank God Al is planning and sorting out all the route and stuff.

I just have NOT got the time!

Today, the weather around here being mostly crappy was spent being remarkably idle.
This is mainly the fault of the neverending bloody cold I appear to have.

Now, NOT one to learn the lessons opf previous misdemeanor's I attempted method 1 again the other day, and blow me down but by the time I got back I felt pretty damned good.
The following day I had to go and collect aged friends of my ageing Mother from Londinium, and blow me down if by the time I got back from there, I did feel a tad on the side of shit again.
Now this may have been the exercise from the previous day, or it may have been the drive down, or it may have just been London Lassitude, but whatever the case I did not feel 100%.
In all honesty I would have been impressed with 75% but I did not even attain that heady goal.

So yesterday in the lead up to some important retail festival, I went and fought my way through the millions of people who were panic buying lest they starve to death for the 48 hours that the shops are shut.
I was behind one family in the queue in Sainsbury, clutching my 2 items, whilst they bought just over £450 worth of food. Mind you, they did look like it was their evening meal, but we will not go there.

Recently I have also followed Alan's blog for 3 episodes of tangential thought patterns.
I was being a bit blond at the start, but I think I have wrapped my dwindling collection of brain cells round it now. Whatever the case I want some of the stuff he's taking.

Yesterday I also had to take Olly to 'M&S' to do the Rugby Club packing thingy.
By the time it got round to going to collect them, I could not get back due to the ridiculous congestion on the roads around Cambridge, and they had to walk across ton to meet me on the outskirts.
OK, they could have cycled, but it is difficult with 7 buckets full of money.

Are you following the theme of this?
If so let me know what it is please!

Today I fitted a new security light to the front of the house.
The old one has been broken for some time, and Lucy was concerned with security and lack of illumination on her front passage.
I am assuminmg she was talking about the security light, otherwise I may have missed a moment there.
Anyway, the NEW light is excellent, assuminmg that was what she meant.

So, by the time my Mother had come over to drop of stuff, and forget to take home her Christmas present, it was time to take the dog out with Lucy, and we had managed to miss the last of the good weather. 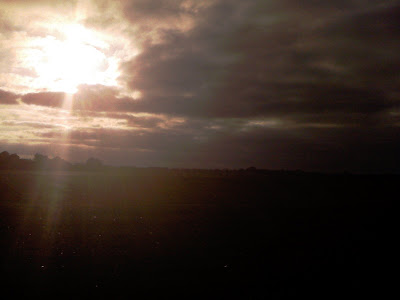 This picture has absolutely NOTHING to do with anything!

Since my daughters friend had commented on the rather pitiful state of our Christmas lights, (all 20 of them), I dug about in the loft and found the old ones.
These I managed to rig up eventually, amidst driving rain and gusts of wind, fought my way through the jammed garage door, plugged them in and voils! Bugger All!

"Did you not think of testing them first?" said Lucy.


"Did you not think to tell me to test them first?", I didn't say that!

So anyway, what has this got to do with walking and blogging?

Eric Gales (check him out)


Time for a beer!

ROUTE DONE! LISTEN TO THE MUSIC

Well my route is now all done and sent in to the Vetters.
I say my route but of course it is AL's route.
I didn't do any of it for once, and I must say it was most relaxing.

I have seen the route of course and IT IS 'AN ABSOLUTE CRACKER'!
But enough of that, because IF I divulge any of it I will have to kill myself.
AL is too far away to kill me so I would have to do the honourable thing.

However I can tell you a bit about it.


So anyway, I had fought off this £^cking cold for about a week now, but it has got me in the end.
I felt a bit crock on Thu & Fri last week and decided there are two ways to get rid of a cold.

So feeling much better on Saturday, I decided to employ Method 2.

Jasper was feeling a bit neglected, what with dark evenings, too many hours spent working before Christmas, and I needed to go out, so we went for an 8 mile run.

Anyway, method 2 does not necessarily work, so after spending yesterday standing by the side of a Rugby field watching Olly, by the time I got home I felt to put it bluntly $hit!
Testimony to this was the fact that I slept all the way back in the car, then most of the evening on the sofa and then the whole night in bed (normal practise that though).
In fact I was a bit late getting up today, but after a few drugs (medical) I spent a day working,
(as you do) and actually today I feel ok. Not great but OK.
I am thinking that Method 1 seems to be the better method, and I leave that as advice.

BUGGERS WHO GO TO WORK WHILE SICK!

Now I have waxed lyrical about these %^*&ing martyrs before.
You know the ones, bloody people who struggle in germ ridden, snorting their germs over everyone, (and before you say HYPOCRITE, I was NOT coughing and sneezing today, I just felt a bit rough)and causing about 20 working days loss through illness when if they had stayed at home then only 1 person would have been ill for maybe 2 days.

And while we are on the subject bleeding open plan offices and communal air conditioning.
Then you add in the fact that we are a generation now of over cleansing fanatics (not our house I might add), three generations down the line kids will have no immune system.

Anyway, last week I had to run a training session.
The people on it were very pleasant.
BUT! One of them (I will not name them, NOT because I do not want to, I have just forgotten who they were - apparently this is an age thing), had a dreadful cold and a cough.

AND.......Coughs and Sneezes DO spread diseases YOU ARSE!

So where was I? Oh yes, the routes in and we now await the deliberations of the wonderful Vetters.

Lisa Gerrard - Sacrifice
One of my favourite pieces of music of ALL Time.
JUST CRANK UP THE VOLUME, CLOSE YOUR EYES & LISTEN!
If this does not make your spine tingle, you have no emotions!
This woman has a stunning voice! 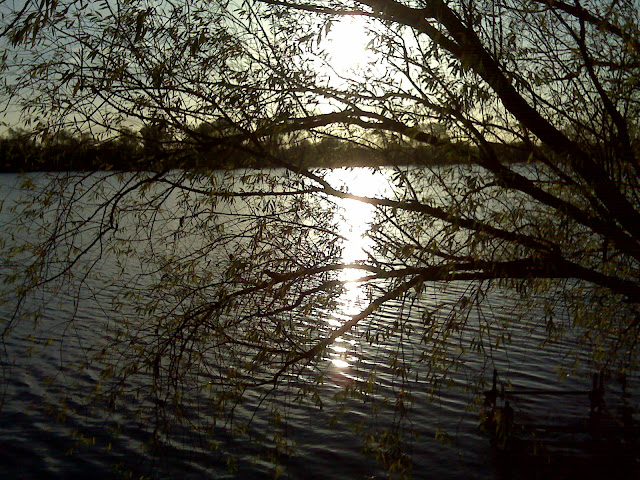 
And if Lisa Gerrard is NOT to your liking then this is also a brilliant track, and may well be appearing on a future Blog.


Aynsley Lister - Need Her So Bad
Just click on this and listen to the Blues!