Four Chaps and a Trailstar (The Langdale Daunder 2012)

Well, here it is, at long last, I actually went out in the Trailstar.
Plus a lot of other TGO gear, so how did it all go.


I had packed all my gear the night before, so by the time that Phil arrived at 9.45 on Thu, I was ready to go.


Now, we just needed to collect Alan and Dave at Nuneaton, and then get to the Langdale campsite, via a brief shop in Ambleside.


The stop in Ambleside did involve beer. 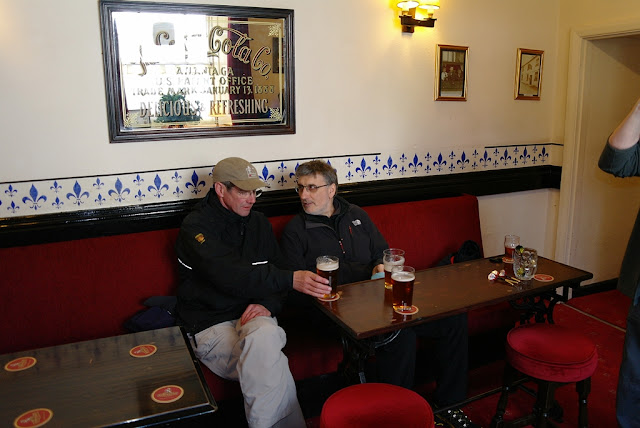 Since I have seen the posting of the incredibly unflattering picture of me on Alan's blog, I have decided that the beer was not a good idea.
In fact, a better diet and more exercise are a definite must do.


It is not fitness, I can still run a goodly distance and also bike and walk,
BUT, and here is the point.


I definitely need to lose some weight.


To my mind, about 10kg at least, and maybe a bit more.
A couple of stone (old money), would certainly do no harm at all.


It is a long way to Langdale from Cambridge, but by about 5.30, we were at the site and setting up tents.


I had decided to take the Trailstar, with the Oooknest.
I had only put this up once in the Garden to do the seam sealing, so this was it's first outing, and my first proper go at getting it all set up ok.


The fact that I had cleaned and oiled the Pacer Poles last week, did not help.


DO NOT USE WD40 on your Pacel poles.


Liberal is what you want, or none as the case might be.
I had overdone it BIG TIME with the spray, and they would not lock at all.
This is not good when you need them to hold the bloody thing up, so after a lot of cleaning, I did finally manage to get them locked.
We will come back to the pole theme, because they are about to get a major overhaul here again to get them sorted.
If not, I will be taking my old Leki Poles on the challenge.

After a bit of a pole faf, I got the tent up just fine.


With the Oookstar it is to my mind a shelter, and a bloody enormous one as well.
I though Wendy was big but this is huge, and weighs in rather less.


I did not get a Cuben Oookstar, the SilNylon one with the mesh front is just fine, and the difference in weight is not an issue to me.
I mean, looking at a couple of photo's I am carrying at least an extra 20lb on my middle.


Well with the thing up and covered in more than a few copulating insects, we headed off to the ODG for some food.


Yep, I am going to be going for smaller portions on that lot for the next few months as well.


As you can see, Al is off the no beer diet.
By the end of the evening, quite a long way off.


It was a bit chilly this side of the pub.
We finished by standing around the nice fire on the other side.
BUT.. eventually it was time for sleep.


It rained in the night, but by the next morning, all was pretty clear, and so it was time to go.


The weather was looking good, but the forecast was pretty horrid

A gentle stroll round via the ODG, or it would have been had I not left my map and compass on top of Phil's car. So I had to run back and get these and that added another 7½ min.
See, I have started the fitness thing already.


I am not going to do a massive description of the route, because that is already done on Al and Phil's blogs 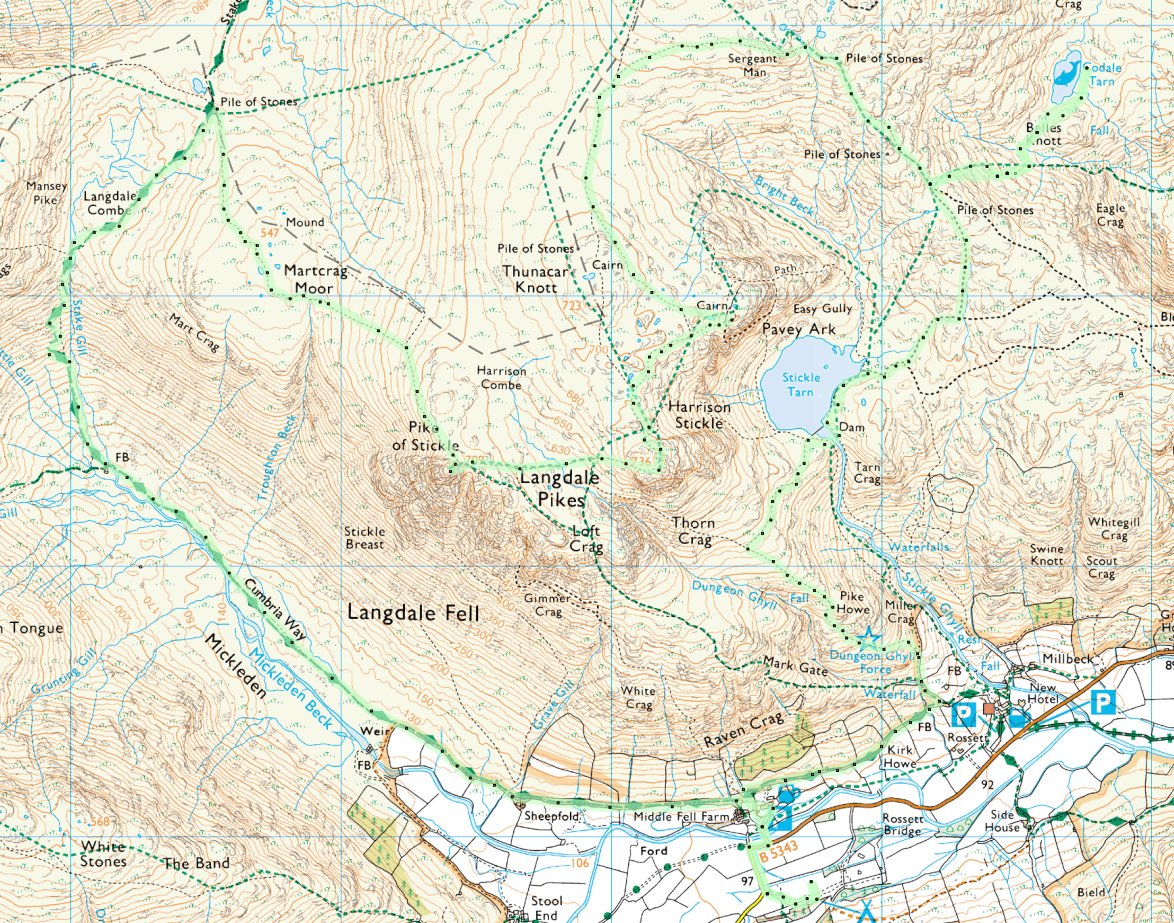 The start is nice and gentle, although as we got to the footbridge, the heavens opened for about 10 minutes. So at the point where the climb up to Langdale Coombe begins we had to have the most clothing on, making it hot work.
By the time we got to the top, the rain had gone away.

The next bit, was a mixture of easy underfoot, with a few rather boggy bits. 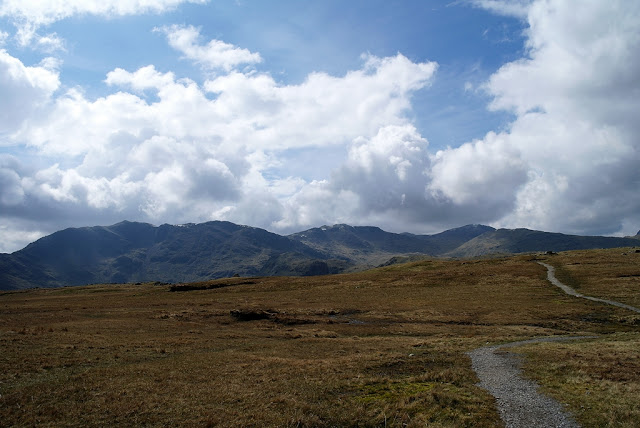 So, we dropped our packs, and with just Poles in hand (which I did not need), we went for the top.
Being a bit impatient, I decided for the direct route rather than just use the path.
Back in my climbing day this would have been a simple scramble, but excess baggage and fear of death, made it less so.
Still, it was a lot more fun than going up the path.


I came down the path!


Having collected gear, we headed off round to Harrison's Stickle and then Sergeant Man,
via a path that in some places was decidedly moist.
The views from the top of Sergeant Man down to Stickle tarn were jolly fine indeed.

After this we descended down to Codale Tarn via the direct route.
Much much nicer that then the path.
Having said that Dave went for several interesting slides on the rather wet and slippery descent.
I also managed a rather fine 4m glissade followed by another shorter one after which I landed on my arse in wetness. Luckily, it was the bottom of the rucksack that took the biggest force and that saved me from breaking my backside.
I did however overstretch my hamstring a bit.
Luckily, it was just a minor twinge and all is fine.
That would have been an utter bugger for the Challenge.


A beautiful little spot for a Camp, I proceeded to put up Treeza the Trailstar.
Al gave her that name on his blog, so I will stick with it.
She's a feisty little number, but I have to say very taut, and that is how they should be.


My only error, was starting the attach the Oooknest ties to the wrong side.
Not a big issue, but it means a bit of a Faff to move it round.
Indeed, that aspect is my only reservation regarding Scotland and the Challenge.


NOT because I am concerned about the robustness of the Traistar, nor how warm it will be if it is cold.


BUT... To attach the Oooknest, and tension it to the outside pegs which it shares with the main Tarp, you do have to squirm about a bit on the ground to reach through and get the elastic ties.


It is not the damp that concerns me, it is TICKS.


That being said, I am pretty convinced now that it is TREEZA and not Wendy that will be accompanying me this year.
Only been out in it twice, but as a shelter I love it.


Mind you, if I don't get my Poles sorted out, she may not be going!

During the night, there was a very brief sleet shower, but that was all gone by the morning.
It was a bit chilly, but only if outside of the sleeping bag.
The only other noise was Phil's sleeping mat.
Well, something in Phil's tent anyway, and best to leave it at that.

We decided to set off by 9, and amazingly, we actually set off at


Yep, on time, even with Phil's strap faff.

It was a stiff old climb up to the top again.
Dave had rushed ahead, but the rest of us stopped quite a lot to admire the view and also for general banter. 
We headed on round, and eventually down to the Tarn.
Here, it started to rain for only the second time.
So on with all the rain gear, which pretty much guaranteed that it would stop.


Which it did about 10 minutes later.


So, off with the rain gear, and down to Langdale.


As we looked down, there was an enormous convoy (snake) of people all starting the Ascent up.
No wonder there is so much erosion on some of the paths in the Lakes.


We finally did the last bit back to the ODG via the Cumbrian Way path.


By the time we got back, both my Poles and Phil's had jammed.


Dave and I had a cup of Coffee, and Al and Phil had beer and Shandy.
We did discuss sandwiches, but then decided after a good rest that we would head back to
Ambleside to the chippy, and to see if I could get any better pegs.


Did I mention pegs?


I thought that they would be the DOGS bollocks, but they turned out to be testicles.
The ground was really not hard, and in all honesty, a 9" peg should not bend.

I have some Alpkit titanium 6" that are excellent. As is their Titanium Cup
Also some 6" Aluminium pegs from Clamcleats that equally excellent.
So, I was a bit disappointed with these overall.


I am now going with a larger MSR blizzard stake at the back.
A couple of 9" Y pegs,
and the remainder 7" Clamcleats Titanium mixed with the Alpkit Titanium


More on final gear list in a blog next week.


So it was all over, and we headed back courtesy of Phil, who did all the driving.
What a lovely chap.


We dropped Dave off back in Nuneaton ,and then Al at Huntingdon Station.
Finally Phil dropped me off at home.


It had been a short trip, but excellent weather, and a good laugh, in the best of company.

This is Stephen Wilson et alia, also of Porcupine Tree