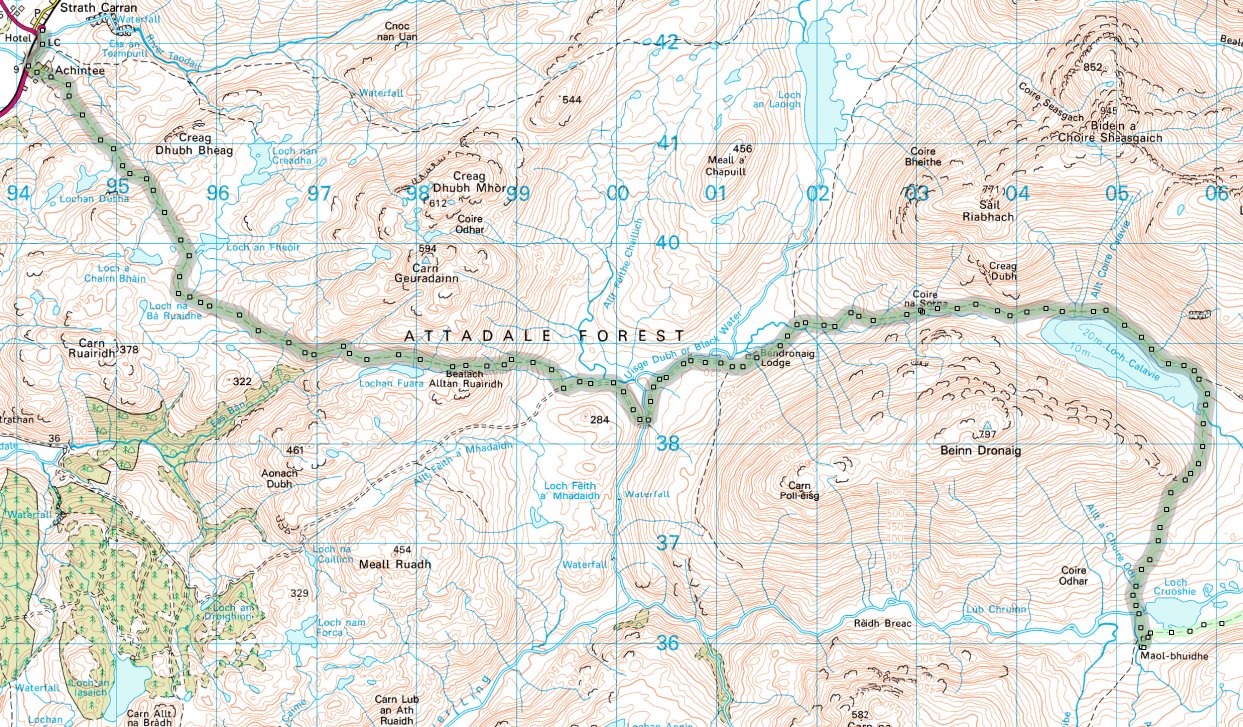 Well after a night of rain, followed by rain and Al on my floor all night we left the hotel at about 8.50. All nicely packed. I had my stuff for the Post Office. I had tried to send it the previous day, but they shut at 1.00 on Thursdays. So I waited for the 'man wot does Post Office things' to arrive! 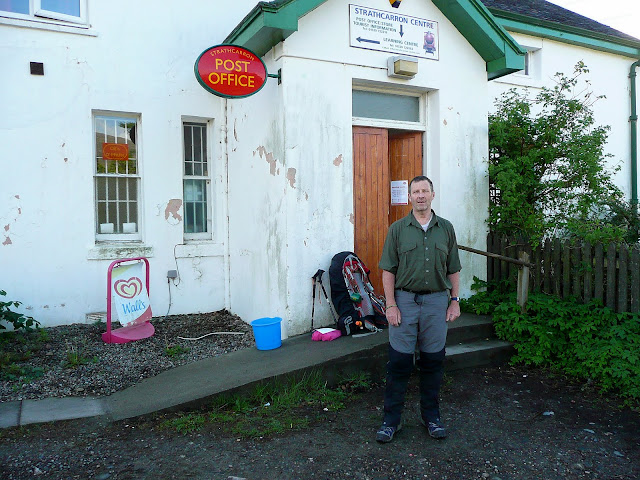 Which he did at about 8.55. "Fantatstic" I said, "I have a parcel to send please."
"Can't do that yet, I have the post to do."
"Not a problem", says I, "I have to get an envelope to put it in. I'll look for an envelope and wrap it up while you do the post"
"Can't do that he says, I have to do the post", and disappears inside to do I know not what.
So I waits, as Al (remember Al, he slept on my floor and used my shower and ...), gets impatient to leave (understandable of course).

By now it is 09:10, and still no open door or sign of the Post Office Man.
Must be one shed load of post every morning in Strathcarron.
So I wait....

Luckily at this point a nice lady, who may or may not be related to the man in the Post Office, arrives to open the shop, and lovely lady as she is, let's me in, and finds me an old bigger envelope than the A5 size biggest that they have, and even let's me use the sellotape roll.
Mean time Al is pacing up and down outside, and the man in the Post Office (wot is busy doing God knows what), has finally materialized to accept my parcel.
Then, after a bit more faffing, accepts said parcel, and I pay over the money to have it sent home.
And I am away.
So at last we start the Challenge
We have another photo taken and off we head.
Myself, Al and Pete (Lilo). 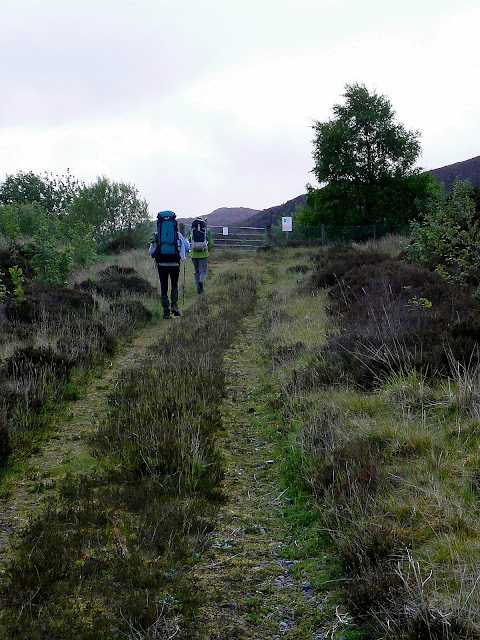 Hmmm. "There is a bloody long way to go, but at least it is not raining.", prophetic words those as it happens........

We walk down the road and off onto the track that will take us away from civilisation and into the cathartic wonders of the Challenge.
Oh and a wee bit of weather!
The weather is a bit on and off as we travel along, and after a pleasant mornings walk with varied comings and goings of assorted waterproof gear, we start to drop down to the river and Bendronaig Lodge. Pete was with us just before this, but suddenly vanishes.
Al has also disappeared into the distance whilst I was putting on my waterproofs (again). 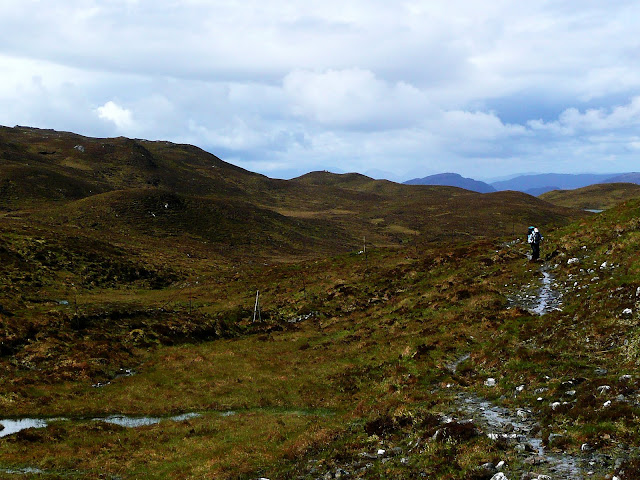 Pete just after the putting on of wet gear, and before he vanished

He's a man on a mission, but I finally catch up with him just before the bridge.

Here a fine bearded chap Bill Archibald appears from the mist and the hill with his lopsided rucksack. He has been for a wander to look at the waterfalls.
We take a picture or two of the foaming stream under the bridge and head round the corner for the bothy.
Still no sign of Pete (He'll be fine! Honest!). 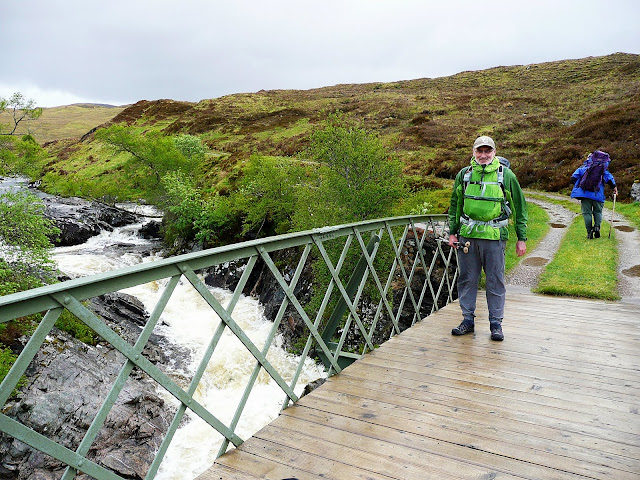 Bendronaig lodge is a rather fine bothy, with water and toilets and rooms and fire and (a dart board?) 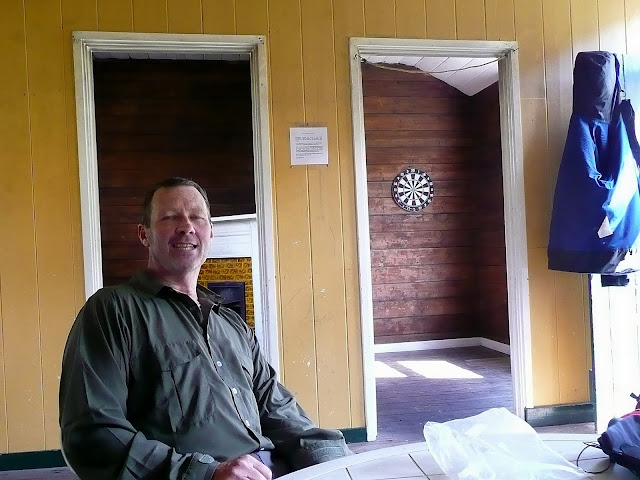 We have a brew and a game of darts with the worst darts ever made (my excuse for losing), and wait for Pete who turns up eventually having stopped for a rest and some food.
The chap who was there when we arrive is heading off in another direction.
(Seemed ok to me, but Al found him a bit odd), and we are ready to stride off to Loch Calavie.

The weather has brightened up a bit, and I decide to not wear my coat, just the paramo shirt.
Nuff said, it starts to rain.
Can't be doing with more rain, so I put my coat back on and of course it stops raining.

Bugger it, leave it on.

Which I do ,and we wander along to the Loch and across the beach at the end. 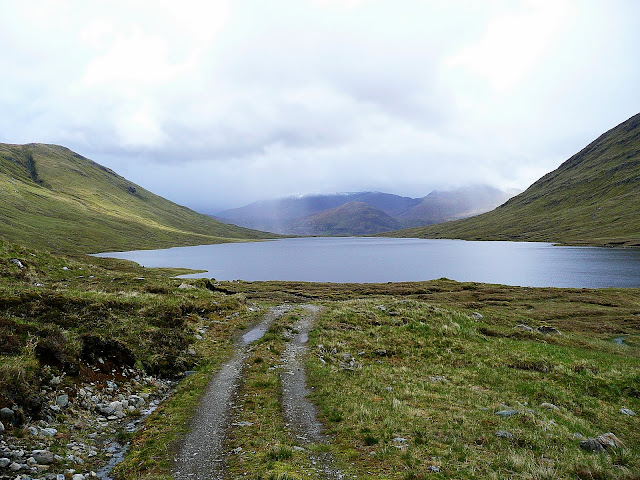 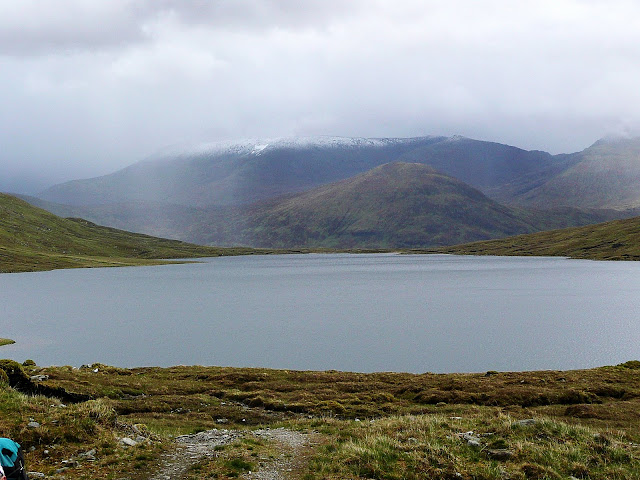 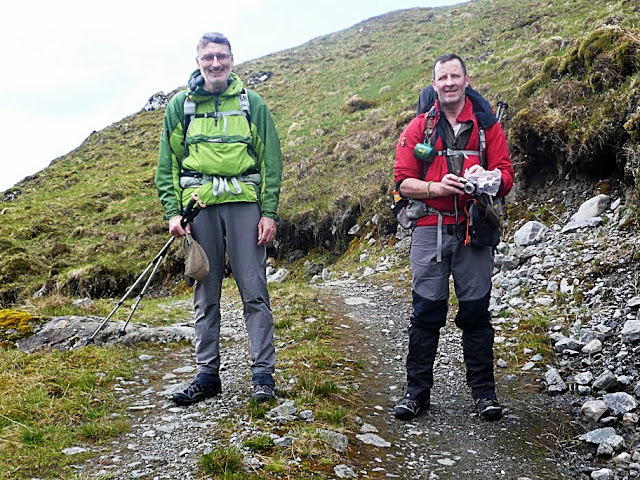 Bill has headed off now, and we are ready to cross the stream and head down to Loch Cruoshie.

It's at this point we encounter the wire bridge.

Al does not like these bridges. Al does not like many bridges to be honest!
He does not like bridges without handrails, nor ones with windy bits, nor rickety ones, or wobbly ones,  or ......
He going to meet a lot of bridges he doesn't like.
And to be honest, they are far better than the ones that are not there at all coming shortly in another paragraph. 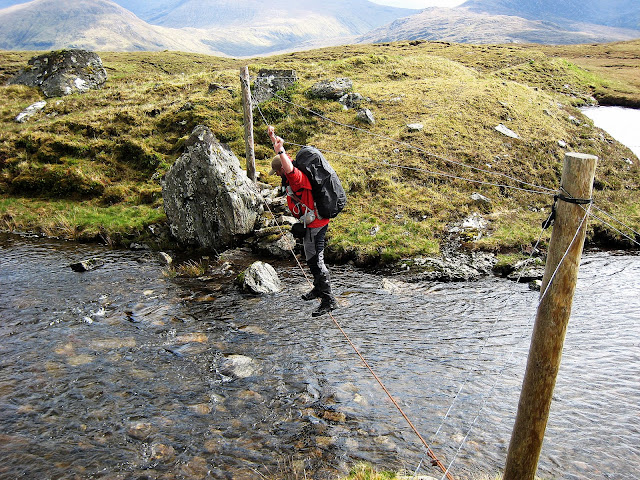 Me on the wire bridge! Piece of cake!

Pete and I cross the bridge (fun it is and anyway the water is not that deep).
Al decides to walk on water and wades across the end of the loch.
(The first of many wades). 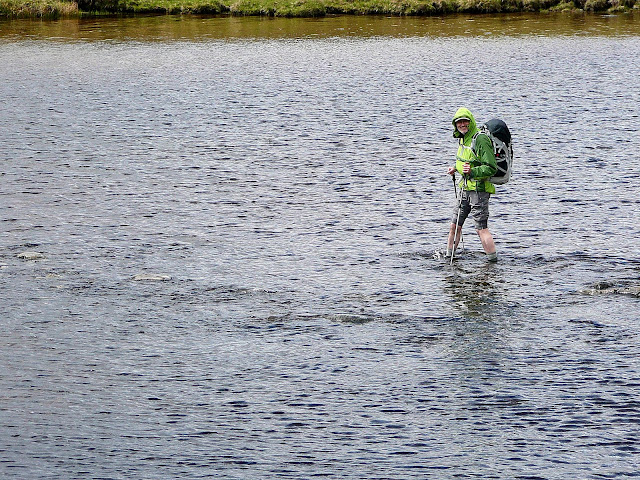 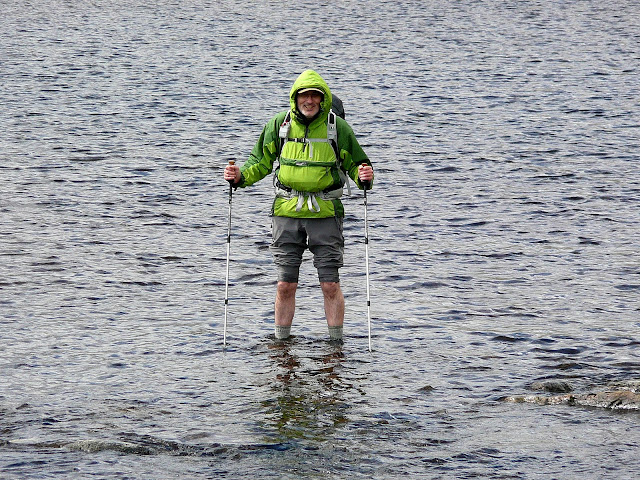 So safely across, we stop for a snack and a snifter of assorted whiskey's 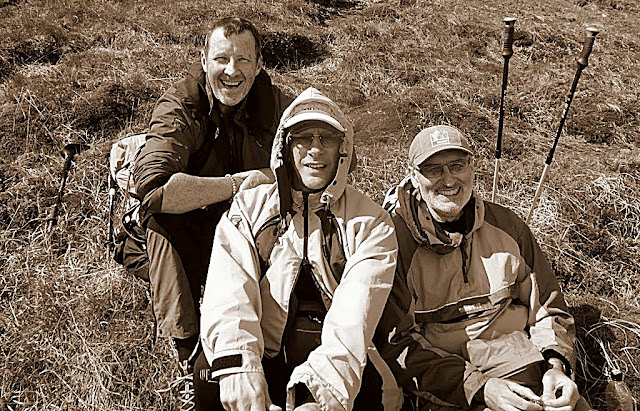 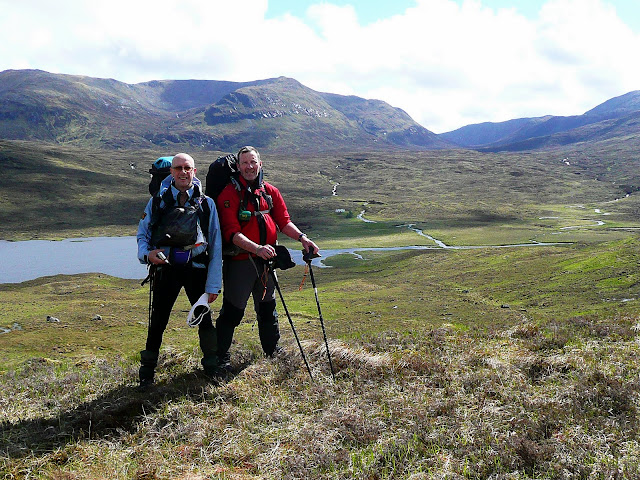 Then we do the short yomp over a bit of boggy, but not that boggy ground to the bothy.

First however, there is the crossing of the water at the head of Loch Cruoshie.

Now this is normally a nice little wade, but it has been a bet wet the last few days and the water level is rising.
It is also heading along the bank we are on at quite some rate.
Not a problem the other side, but we are on this side, and need to get to the other side.
So we have a bit of a wander and I decide that discretion being the lesser part of valour, must remove said trousers and shoes and stuff and attempt to get across, whilst Al and Pete look for an alternative. We dally around at the fast running bit with various attempts, but no success.
I have a crack at getting across in the deeper water.
This is ok, but by step three, I am up to my thighs and the poles are below the handles.
Also the next step takes me into water 2 feet deeper, and about another 2 feet of silt below that. At this rate I'll be stuck and up to my neck, and the water is rising and ....

I return to shore and the original crossing point.
It is an interesting place to cross.
All you need to do is place your foot into the water about 6" to the left of the rock you must land on so as to not be swept away downstream. Then repeat the same movement with great rapidity on the next 2 rocks that are about 12" below the surface, and finish with a leap to the shallow bit.

After the first step there was only one option, so I went for it.

I attempted to encourage Al and Pete across at the same point, but they were having none of it. 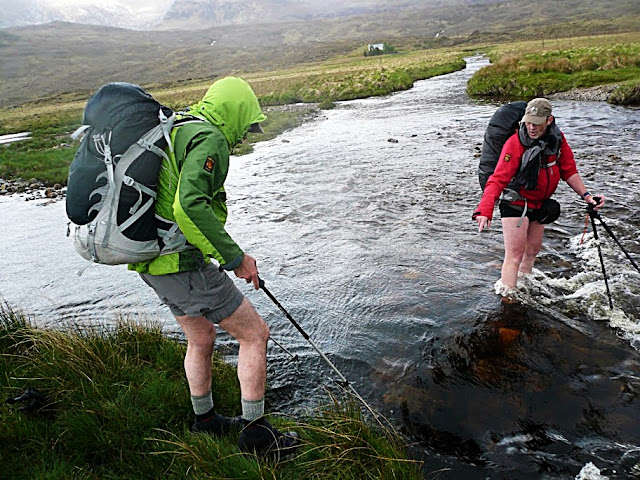 Could I get them across. Could I buggery.
So they stood on the bank umming and ahhhrring.
And I stood in the water in my pants freezing my *&^* off.

To assist with my pending hypothermia, a small squall of hailstones and stingy rain swept through. That's not sunburn on my legs, it's blood, they have been flayed by rain.

Well truth be told, after a period of about 20 minutes that seemed like about 2 hours, we all got across and made our way to the bothy.
What a fine bothy it is. Well it is once you can get through the door with the dodgy bolt it is anyway.
The weather is brightening up briefly, and we get out kit sorted out, and socks and shoes out to dry.
Pete at this point brings out his set of Pound Shop mousetraps. 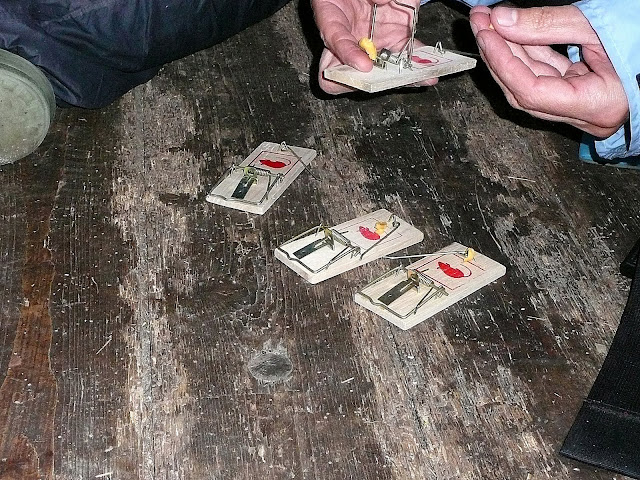 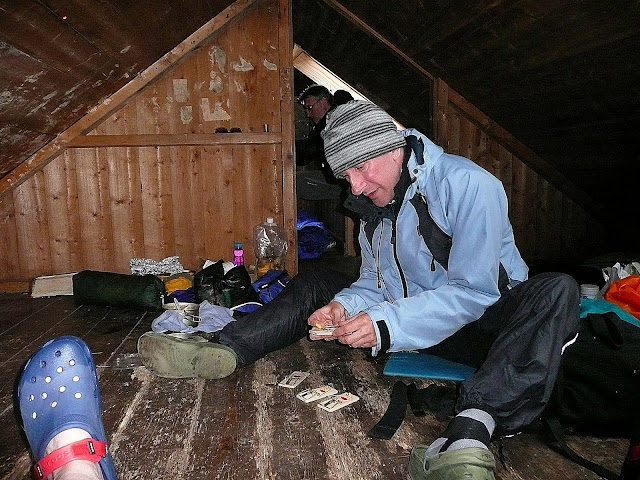 That's my foot that is with the blue Croc. As you can see, Pete has taken his right leg off and it is lying on the floor. That's what I call Ultra-light backpacking.

This is a man with an agenda this is.

It is just after this, and maybe a dash of Al's rocket fuel (English Whiskey), that we spot a man (later to be know as Robert) in the distance looking to cross the rive (remember the river?).
Now this is NOT a river to cross on your own, so I decide to nip off down there to give him some moral assistance and encouragement. Especially as he has by now done an extra 3 Km up and down the bank.
Well I was, but it started to rain, so I came back for my waterproof, and headed off again.
The intention was good, but by the time I got half way there, he had made it.


We have no images (best not to it was agreed) of this man in his underpants walking up to the bothy. Fine legs, but NOT for public consumption on the Web.We gave him a whiskey and we all settled in for the night.Kit reasonably dry. Food on the go, and all nice and warm in the smart clean bothy (with mousetraps). 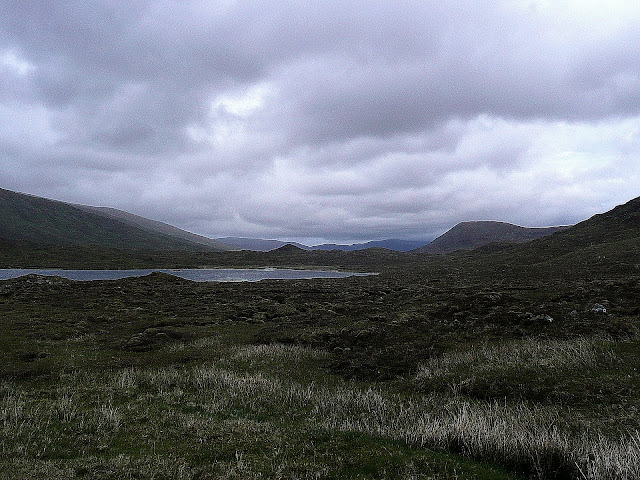 Evening view from the Bothy. If you look very very closely, you can see a herd of deer swimming across the far end of the loch. No you can't but they really are there!

It was to be a very stormy and wet night, which was to make us consider our route for the next day. We had already decided, that the original plan for the
Mullardoch 4 (An Socach > An Riabhachan > Sgurr na Lapaich > Carn nana Gobhar > Mullach na Maoile) was a bit of no goer, but we were now thinking that the FWA might be out of the question as well. Maybe the FWA for the FWA was in order.
We had a think and came up with a plan.