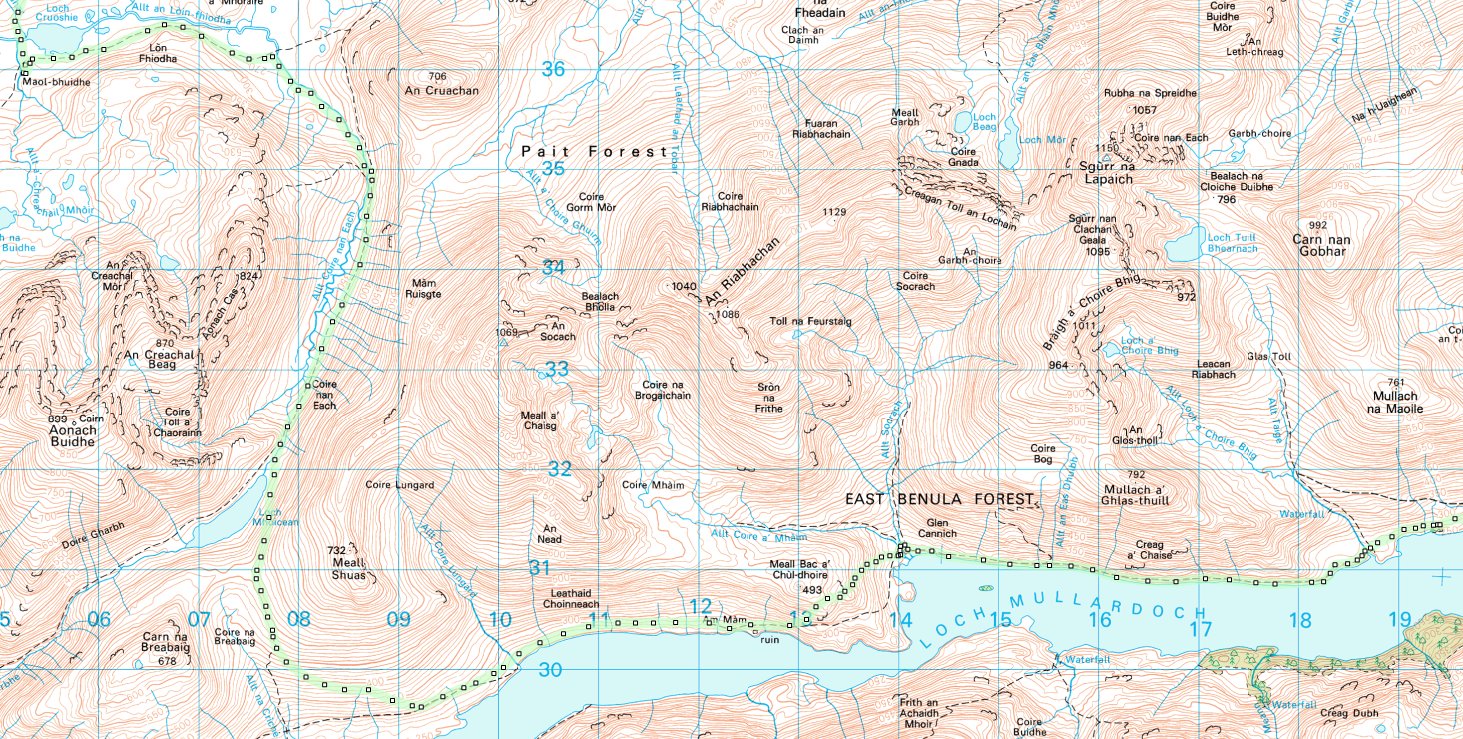 It was time for a decision, so we decided that we would decide later, when we got to the river.
It was a plan of sorts and it worked for us. We were not going high today.

So eventually after waiting for Pete (see, it's not always me!), I think he was checking his mousetrap, we set of East along the South shore of Loch Cruoshie.
It was not a bad path, and although single file, the weather was ok.
It did not take long until we arrived at our crossing point.

We looked at the weather and the stream, and made decision 1.
We would stick with the FWA.
It was a nicer option and would not require a later road yomp.
Well it would, but nowhere near as long.
After a bit more discussion, it was fairly apparent, that we were NOT going to cross there.
A look at the map told us that we needed to head South along the bank and look for an easier crossing point. 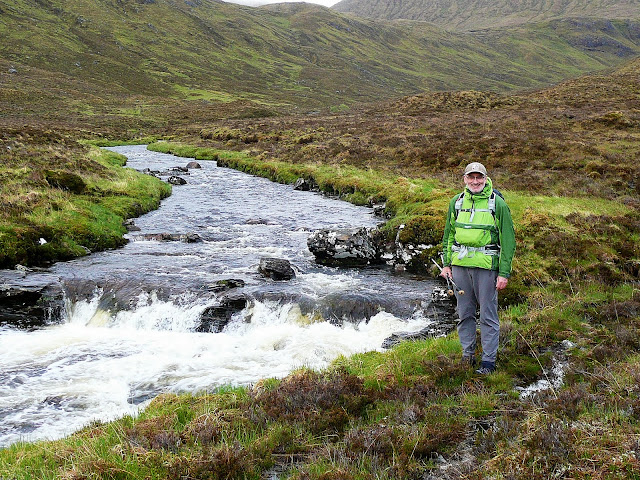 So Myself, Al, Pete and Robert started our journey South and then later a bit Southwest, to find a place to cross. It was not a bad track, although not as easy as the track on the other side would have been. The one we were NOT on. 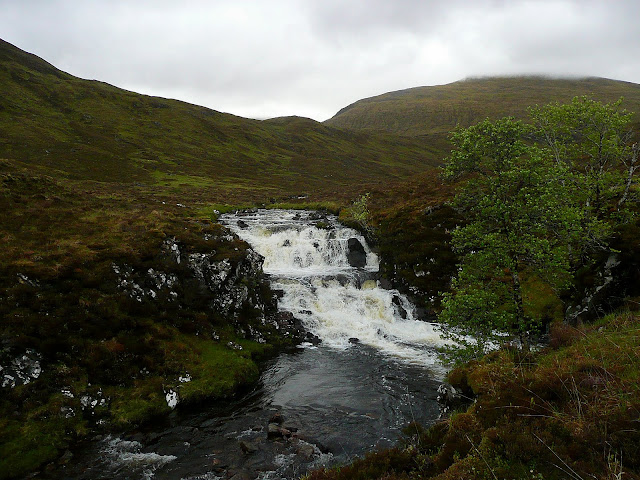 We'll not be crossing here either then

So we headed along a bit further, until we found a suitable place to cross. 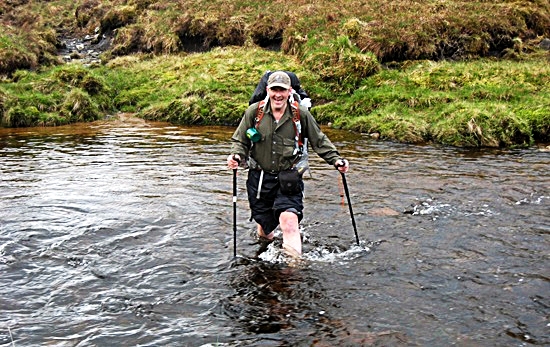 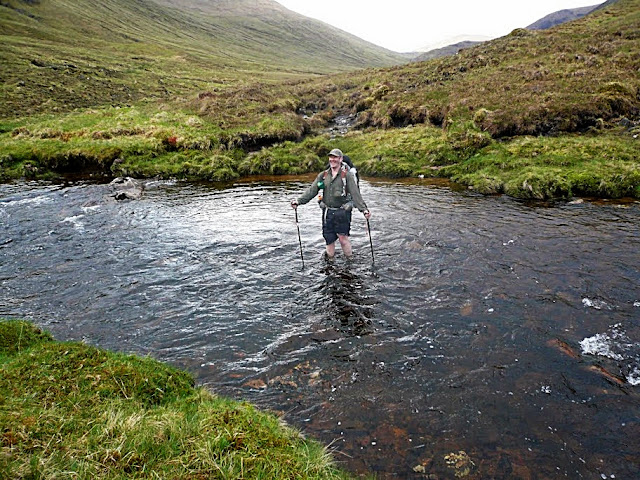 It was quite pleasant on the feet as well, and the Crocs elastic repair job was holding up nicely

At the other bank, Pete left us. He was heading over towards I think Struy. (He may correct that later), and we continued South to Coire Nan each and Loch Mhoicean. 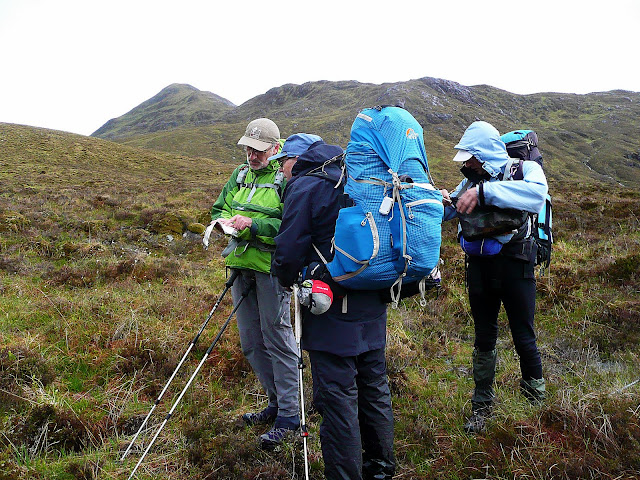 Al checks the map just before Pete departs up the hill

It was pleasant walking, and at the moment the weather was holding up nicely. 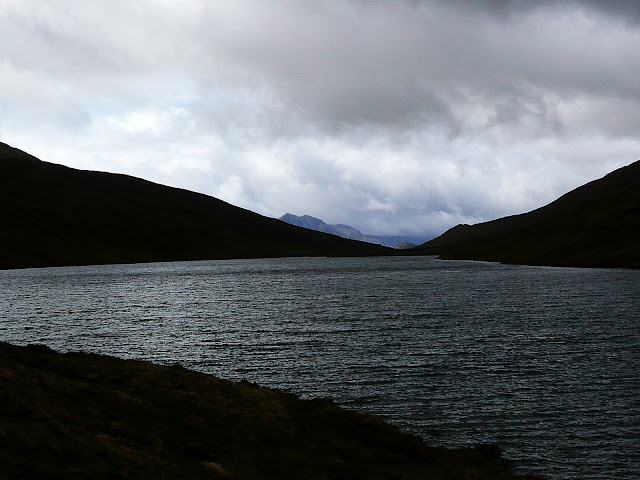 At the loch we crossed a small sand beach and headed up over towards Loch Mullardoch.
At the top just before the decent, we stopped for lunch. The sun had come out and although a bit chilly, it was a great view. 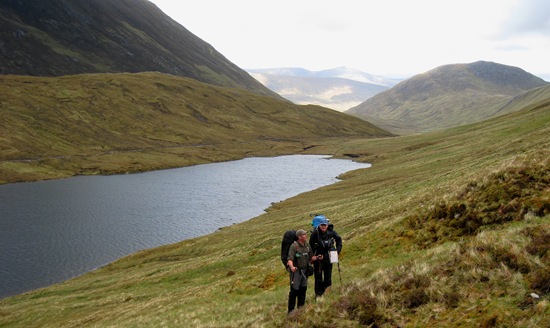 Rob and Me heading up from the Loch

Just as we started down after lunch, the weather changed back into it's irregular patter, and it rained again. As it happens, it was a short shower, and we were to be lucky for the rest of the afternoon. Well until we were about to pitch the tents that is.
Let me say this now.
Although it is reasonable walking, it is a BLOODY LONG WAY along Loch Mullardoch.
I will probably say that again. 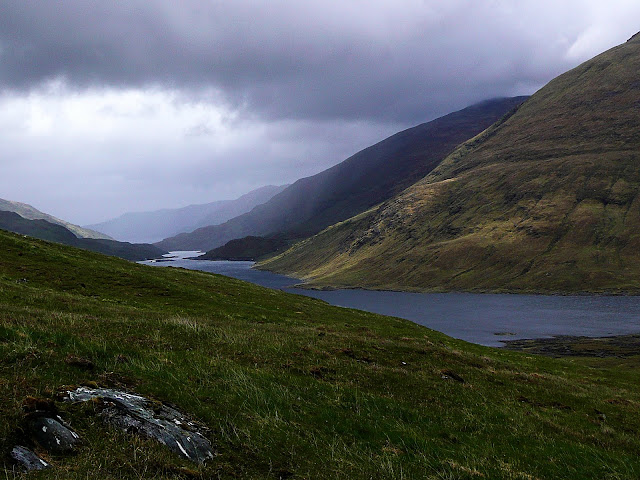 A First glimpse of the Loch

We traversed down to pick up the intermittent path along the North shore
The going is reasonable easy, but a bit tedious at times, although some of the views were stunning, with the moody weather.
I had somehow twisted my foot, and was getting a pain in the top walking on the heathery tufts. Al had disappeared into the distance, and Robert and I were bimbling along at a reasonable pace, if I had not kept on stopping to faf around with my shoes. 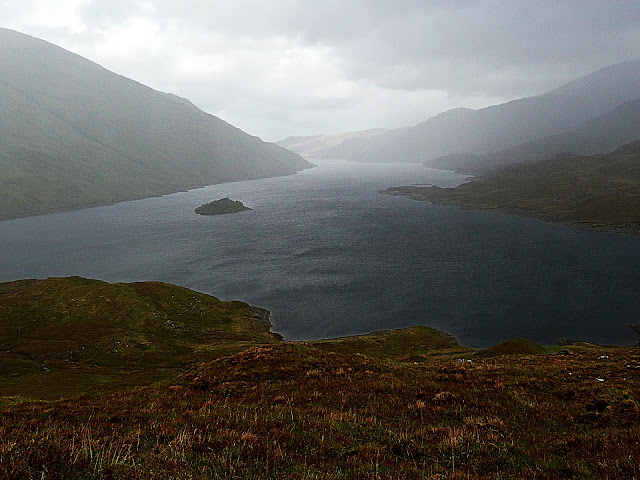 Eventually we caught up with Al at the ruined building at Am Mam where we met Carl.
He had just finished a break and was about to head on.
We said we would see him later, had a brief stop, and then headed off.

Carl took the lower track, but this is actually much further round, especially if you stick to the shore, and we headed off up and over.
A short sharp climb, but much quicker.
As we dropped down to Glen Cannich and the buildings we could see Carl just coming round the headland. 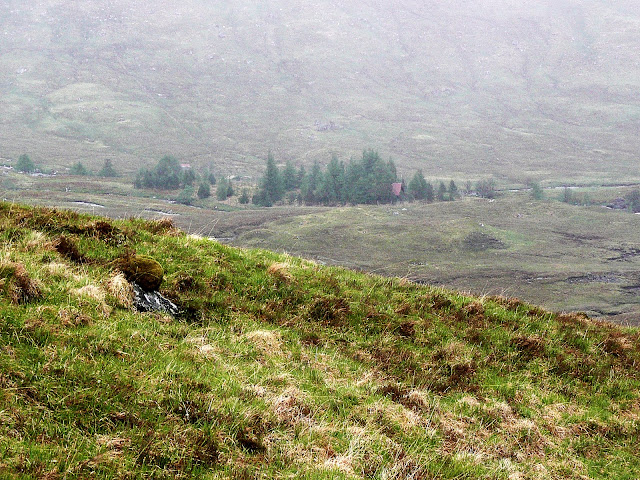 View from the top before dropping down to the bridges

There is a great little building with a Veranda just here, although it is locked.
There is also a very wobbly rickety bridge that Al was dreading (remember Al's bridge phobia). Well, as it happens, there is NOT a rickety old bridge here anymore.
Indeed, there are two rather fine new bridges here. Which is just as well, because it would have been a long walk up to find a crossing place. 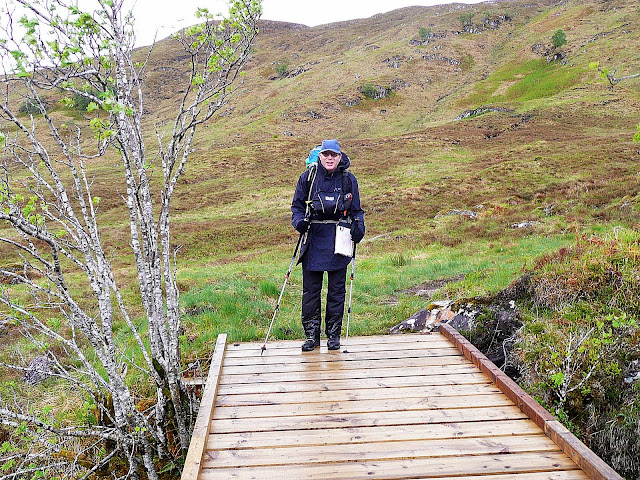 Rob crossing one of the new bridges. Still no hand rails, but big and wide and strong.
Al got across with no problems. 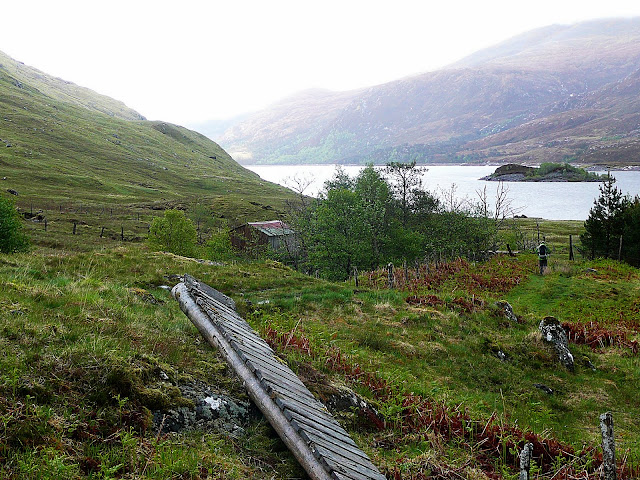 And the remnants of the old bridge

At the building we met Brian Shepherd. He had started in Dornie, and come across today from Iron Lodge. He has a few Challenges under his belt does Brian, but none for the last few years. He had pitched his tent under the veranda, and was looking somewhat knackered. We offered some help, but he said he was OK. Eventually we left him there, but promised to ring into control for him the next day, and also check he was ok.

He did make it to Cannich, but unfortunately had to drop out at that point.
Well, we still had a long way to go. And it is a Bloody Long Loch (did I mention that?).
You walk along a bit, go round a bit of headland, and there is another bit of headland, and then another bit, and another. It is like cycling up hill in the Pyrenees, only a lot wetter.
So we carried on along the shore.
To be honest, it is a bit of a slog, but the views were great, and my foot had stopped hurting which was nice. 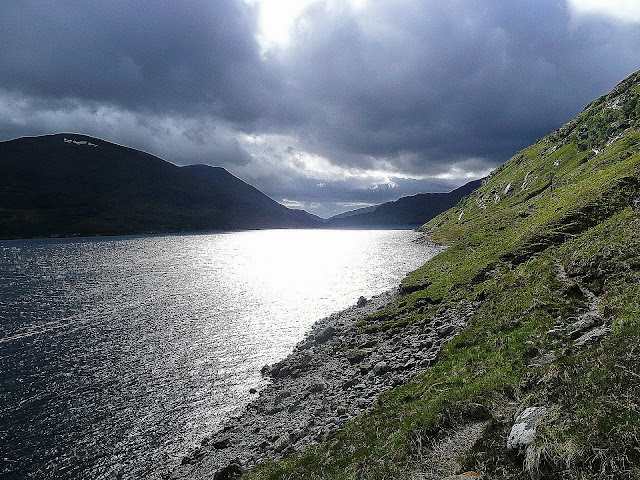 Wonderful moody view back along the loch 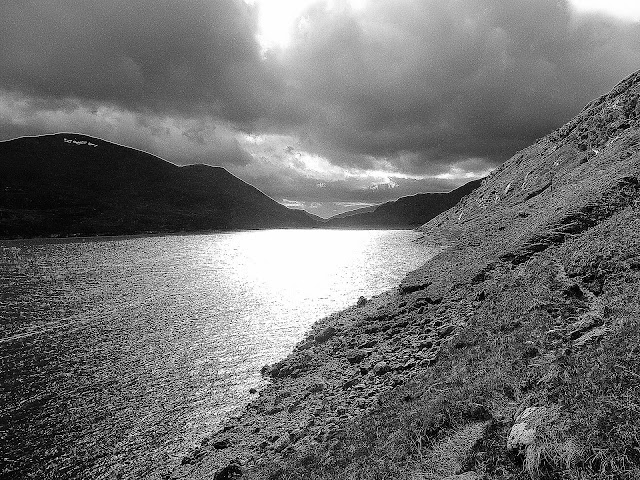 We carried on to the next crossing point.
There were two more possible problem crossings along the loch. We had decided that we would not get to the end today, so we would camp just after the next crossing, once we found a suitable spot.
The crossing point actually turned out to be fine.
Rob somehow managed to get across by acts of extreme balance.
Al just waded through as he did quite a lot,
And I spent forever changing into crocs and walking across, and then drying my feet and then rushing to catch up. That is why the photo is so distant. Al was almost at the camping spot when he took it. 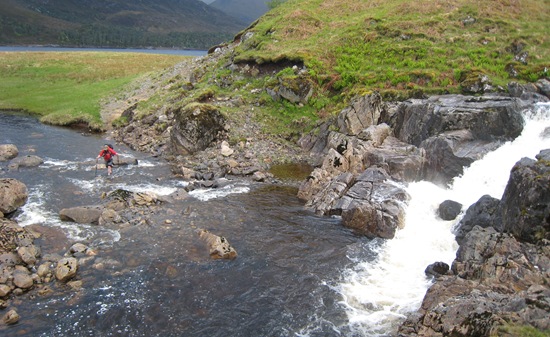 Me crossing just before the Camping spot above the small copse

After this crossing, the actual track goes up much higher, but we were all pretty tired by now, and anyway it looked like it was going to rain, so we needed to get tents up. I could see Al and Robert in the distance looking for a spot just above the copse of trees, but it took me (what with drying feet and stuff), about 10 minutes to catch up with them.

There will be NO photo's of this campsite.
Unfortunately no one took any, and also it rained a bit.
It rained so many bits that they added up to a LOT, and it was a bit windy.
Well, we though it was windy, actually later on we were to discover what windy really was.
So I took Wendy (she's the tent), out of her pack and got ready to put her up.

This was the second outing for Wendy. I had brought her off Mick and Gail, and given her a bit of a test in the Lakes just before the Challenge. She was a fine specimen of a tent, and huge as well as robust, despite only weighing in at 1.3Kg. (And ED! Nothing wrong with her colour OK)

Now real ultralight guru's will sniff at Wendy's bulk. But she is a 2 person tent, weighs less than an Akto, and is just as robust. Also for the extra .5Kg over a tarp or whatever, what you get is a PALACE!
One you can cook in, with room for all your kit, and you don't need a bivvy bag and .......!
If you want to hear another hours worth of facts ask Al about Wanda.
Anyway, take it from me, she is very accommodating.

HOWEVER... (capitals here for effect), having had to pitch her on boggy moss, I did discover that she was a bit incontinent. Yep, Wendy had a 4 cm perforation in her bottom.
Normally this would be fine, but on very wet moss, in rain, this was a veritable fountain.
Not a problem I have Duck Tape.
Now let's discuss Si Nylon Groundsheets.
There is pretty much BUGGER ALL that sticks to them. Well I had bugger all that stuck, and we tried all sorts of tape. There is a lesson here. Take tape that sticks. Spinnaker tape or tape that does stick to the bloody stuff.

I have learnt a lesson, and my kit now include such equipment.

Luckily, I did have a big microfibre towel, and a space blanket that acted as a barrier and all was well, apart from the lake underneath my sleeping mat the following morning. (We'll come back to that tomorrow).
The space blanket was the business though, and after a few hurried shared whiskey's and food cooked inside Wendy with the DOOR SHUT, all nice and warm, it was time for sleep.
In the interim, Carl had arrived and put his tent up.
Unfortunately, Carl had left his camera somewhere at the ruin earlier. This is a real shame, because you need your camera on the Challenge. Maybe someone will find it and hand it it, which would be nice.
So, we had had a chat amidst dodging rain drops, and soon everyone was snug inside their tents as the rain and wind got more and more and lashed into us. It turned out to be a pretty windy and wet night, which always makes the 2.00am toilet requirement an arduous affair. I didn't bother, but I was desperate by the next morning. We'll come to that as well.

So, that is it. Day 2 was over. It was not a long distance, but it had been a long day.

Music on, and sleep. Wendy shook a bit that night, but she was fine.