So anyway, the plan was to be away by 8.00 (that's am).
We had agreed to this, which means I had agreed to this, so Al has a fair point!
It has been a wet windy night.
I am awake at 7 and lying in my bag desperate for a pee.
It is still a bit wet and rainy outside and I am holding out as long as possible.
I can hear movement, and breakfast stuff going on outside, and Al has rattled my tent to tell me to get up.
I have acknowledged this, and I have the best of intentions, once I can get my body to get out of the sleeping bag.
Well eventually I did crawl out and I get MOST of my stuff sorted out inside the tent.
At last I pop my head out.
All I need to do now, is pack the last few bits away, and get them into the rucksack, and put the tent down, and the most important thing of all that I have just discovered must be done and really NOW!
Is have a jolly good $&1T.

So I crawls out of my tent, and there are Al and Robert, all packed and tents away and standing in under the trees, in the cold ready for the off.
"Just need a $41*", says I "and I'll be right back."
Al is NOT a happy man.
There are reasons for this.

A meaner nastier person would have said ("see you later"), but Al is fundamentally a jolly nice bloke, and so stood getting colder and colder while I dug holes and filled them and came back and took down my tent and packed my tent, and packed my stuff and put on my gaiters and got ready and  .................

Al you see does NOT run Hot. Indeed quite the opposite. If I have 2 layers on Al has 4 or 5.
If I have just a shirt on top, Al has a base layer and a fleece and maybe something else.
What I am saying is that he froze his nuts off waiting for me and I should have been ready on time.

So there you have it Al.  SORRY,

Time to introduce Robs tension straps. These had actually introduced themselves the previous day, but I decided not to mention them until now, lest Rob consider it a complaint, which it ain't (poetry already).
Rob has a case on the front were he carries stuff that he needs to be accessible.
Actually, a casual glance round Robs rucksack where all the other things he needs to be accessible are attached, or dangling, or stuffed in pockets, would make you wonder if he needed to pack anything inside it at all.
Don't get me wrong here I am not having a dig. Rob is a good bloke. I walked with him quite a bit this year, and also funnily enough quite a bit last year with Roger and Nigel, and we had a good time.
But this year he brought these tension straps that hold on this pouch thing that always lose their tension.
On a bad day, this is approximately 4 minutes after they have been tensioned up.
On a good day, about 5 minutes after.
We'd have got to Cannich about 2 hours earlier without Robs tension straps.
I exaggerate. Quite a lot really, but that is poetic licence.

As luck would have it, we did cure them at Cannich with some micropore tape.
Well I think we did, because I did not bump into Rob again until the Larig Ghru, and I should point out that the straps were not the reason.
So where was I? Oh yes we are on our way on day 3. 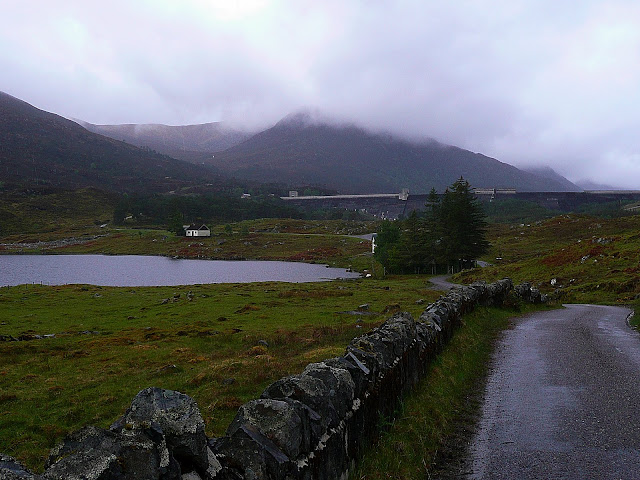 A look back to the Dam from near Mullardoch House

It was not going to be one of the most fantastic days walking, there being quite a lot of road in it, although there were some nice little bits, and to be honest the weather was not half bad.
We stopped on route a couple of times just to take the tarmac ache from our feet and also to re-hydrate (water ok) and of course there were Robs $%^&^ tension straps.

I had been walking in gortex socks for much of the shore line (it was quite wet under foot) but now that we were on tarmac they actually made your feet worse and sore, and a switched back to my old faithful X Socks (brilliant they are).
More about kit later. Much later actually. In fact right at the end. You'll have to wait a bit! 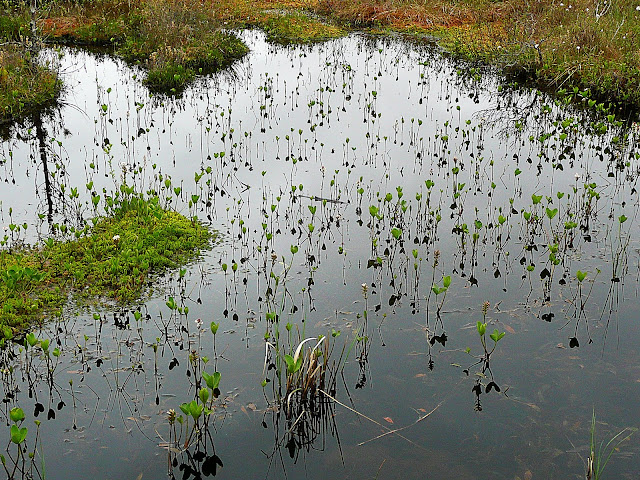 We carried in with many a conversation (too many to remember or recount here, but it took the mind off the walking).
Quite a long way up, near Craskie (a bit after the sock and coat change), we caught up with Ed(whose name cannot be spelt). He had been with Jack, but had gone off to do some higher stuff, and they were meeting up again in Cannich.

We also bumped into a herd of cows being led down the road.
Mainly mums and young ones.
Last time I was here back in 2006, I met the same herd (well not the same herd to be honest, but a similar one none the less), although some of them may have been babies at the time. 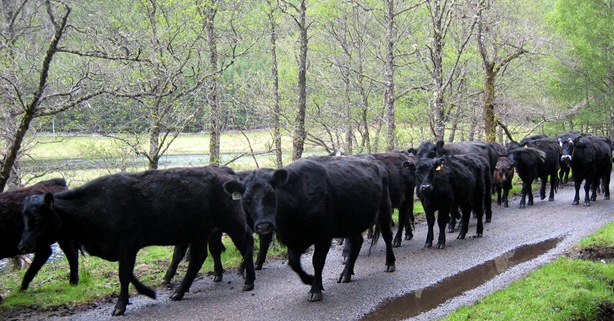 None of them recognised me though

We waited for them to pass, and had a chat with the farmer, whilst several cars waited for us to stop talking and the herd to move off, and then we then carried on to Cannich.
Here Ed headed off to the campsite, and Al, Rob and myself sought out hydration materials.
The first and later better pub was closed so went on up the road to the Slater's Arms.
I sorted out a few things on my rucksack whilst Al and Rob went in.
I followed a bit later and brought a pint at the bar, and had a chat with the barman. He seemed ok, but apparently they had not been so welcoming to Rob and Al.
Later we were to hear that this was a bit of a theme with Challengers. Considering the amount of custom in Cannich, you'd think they'd bend over backwards to make you welcome. Oh well.
So we had a pint or it may have been 2, I think I only had the one actually, and a bowl of soup, which was quite good.

As we sat there, familiar faces came by with bags of litter.
This happened to be Bill Howden and David Albon. They also came in for sustenance, and I believe a similar welcome.
But it was good to catch and and we had a bit of a chin wag and stuff, and then headed off to the shop next door for a few supplies before going to set up at the camp site.

I bought some jelly babies or something similar.
Bill Howden helped the nice shop people to take out a Slow Worm that had somehow found its way in (shame I had no camera with me),
and Al bought heaps of stuff (cos it was on offer), which included 3 Nan breads, and assorted pies. It would help him get to the camp site.

Then feeling much lighter of foot, but not of rucksack we headed off to the campsite to book in and set up.

They are really nice at Cannich Campsite and are extra helpful if they can be.
They also have a lot of great facilities, and electricity for charging stuff, and a cafe and coffee room, and drying room, and washing machines and showers and ..... It was great. 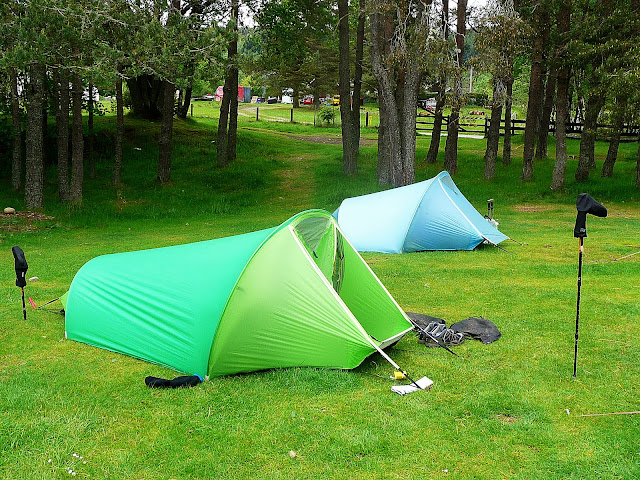 Wanda and Wendy all set up

Now I like my tent, and although I did not choose the colour (Mick and Gail did), I can find nothing wrong with it. But despite this Ed insisted it was a dreadful colour.
Like do you mean it isn't Akto Green? He'd probably consider my old Competition dreadful too, because that was Red.
Just joking Ed. You are of course entitled to your opinion, regardless of how dreadfully wrong it is!
Well, we set up, charged up, cleaned up, abluted up, dried up, dried out, sat up, sat down, lay down, and in every way were fresher and cleaner than we had been on arrival.

I should also at this point like to thank Bernie Roberts, for letting me dry my towel and pants in his washing, (cos I had forgotten to do them when I did mine earlier).
What a Gent!


Rob also managed to partially fix his tension strap problem, by using some micropore I had, to stop the strap running through the clip (Al's idea that!)

A lot of Challengers arrived over the next few hours (including Pete who we had left earlier the previous day). There are too many to name. but you know who you were.
And thus it was eventually time to go down to the Pub for a meal and hydrating fluid.
This time we went to the other Pub, the closest one to the campsite, whose name I have forgotten, but it is the first one that looks a bit shabby, but once inside it is great, and welcoming, and good food, and a warm atmosphere and a fire and well worth a visit!

Here we bumped into Brian Shepherd again, who had at last arrived.
He said he was going to withdraw the next day.
We tried to tell him it was fine, and he should sleep on it, before making a decision.
We had a chat, and he did sleep on it, although we later heard that he did withdraw.
There is No shame in that. Just starting it is good. There's always another time. 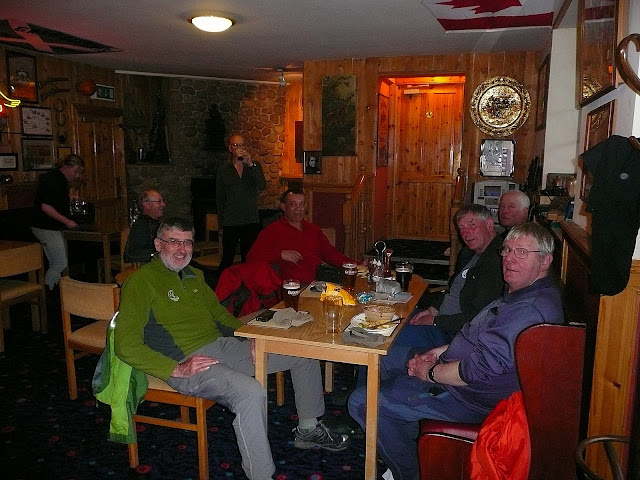 Al, Brian, Bernie, Carl, Pete and some others whose names I am afraid I have forgotten.

Anyway, suffice it to say, we had a jolly good night, and eventually all returned to the camp site, for a midnight Whiskey and Sloe Gin.

I had forgotten about the Sloe Gin. Al had brought some of Phil's and I had a bottle that my Mum had made. We had started in on it on the first night at the bothy, and bloody good stuff it was.
Smooth with a light kick. Not the Wumph of Al's rocket fuel.
And then it was time for sleep.
We would be up early the next day to get to Drum for the early ferry.
The wonderful people at the camp site, agreeing to open up at 6.30 so we could have breakfast.
It had been a road walk, but it had still been a great day, in great company as always with the Challenge.

Three days in now, the initial shock of lugging that pack had subsided, and fitness was settling in.

The Challenge was On!